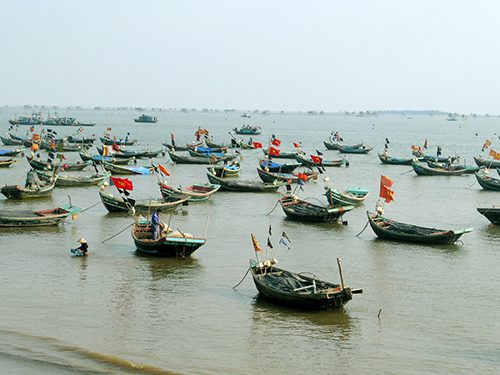 By the end of the century, 45% of the world’s saltwater fish species will have moved far enough away from their historical habitats and migration routes to undercut international agreements and spark conflict, says a new study.

Should the world’s current carbon emissions trajectory be maintained, just under 25% of all marine fish will have markedly shifted their habitats by 2030, the University of British Columbia study projects.

There is much at stake in those shifts, as the stocks in question “make up 80% of catch taken from the world’s exclusive economic zones (EEZs),” lead author Juliano Palacios-Abrantes of UBC’s Institute for the Oceans and Fisheries told the Independent.

As species move in search of cooler waters, they may well leave one zone for another, and “spark tension over who can claim to own them,” he explained.

Countries whose marine economic zones are found in tropical waters, like those in the Caribbean and South Asia, will be hit first by the forced migration of fish species as oceans continue to warm.

The shifts in the distribution of such a valuable resource could lead to international agreements collapsing, Palacios-Abrantes said.

Meanwhile “the supply of farmed seafood will drop by 16% over the next 70 years unless more is done to tackle the climate crisis,” The Independent adds, citing another recent study.