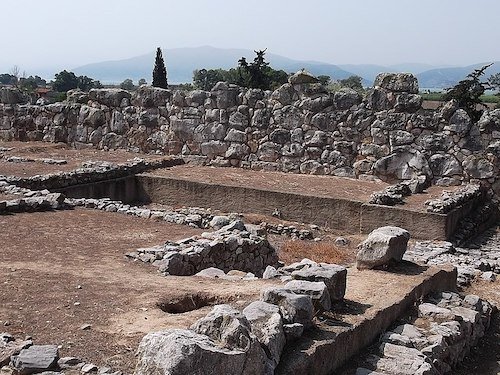 Humankind quietly committed to climate change much earlier than anyone had imagined. European archaeologists have pushed the history of fossil fuel power back to Bronze Age Greece.

Three thousand years before British engineers produced the steam engine to drive the Industrial Revolution, the artisans of ancient Mycenae and Tiryns in the Peloponnese used lignite rather than wood to forge the bronze swords and shields celebrated by the poet Homer.

And the evidence lives on in their teeth: researchers have identified the chemical signature of lignite—sometimes also known as brown coal—in the remains of individuals who would have lived and worked in the eastern Mediterranean around 1300 BC.

The same scientific techniques are beginning to reveal the fuelwood that ancient coppersmiths and potters used, the food they ate, and the fumes they breathed, all from evidence preserved in their dental tartar, the deposit that tends to stain tooth enamel. The poets of the ancient world composed epics to be spread by word of mouth. Now, those mouths are still telling unexpected tales of distant wonders.

Stephen Buckley of the University of Tübingen in Germany and the University of York in England and 29 colleagues write in the journal Scientific Reports that they spent five years studying the skeletal and mummified remains of 67 individuals who lived between 1600 and 900 BC, in sites as far south as Thebes in the Egypt of the pharaohs, as far west as Tiryns in Greece and Chania in Crete, and as far east as Megiddo—known to the Greeks as Armageddon—in ancient Canaan.

They used advanced spectrometry and microscopy techniques to look for the chemical signatures of the smoke they breathed, with techniques sensitive enough to distinguish inhaled particles from pinewood, oak, olive, and dried animal dung. But when the analysts turned to individuals from Tiryns and Chania, they found something entirely unexpected.

“We could hardly believe it at first. Half of all the individuals from both sites—both males and females—clearly had the chemical signature of lignite in their tartar, in addition to the expected woods,” Buckley said.

“This means we can prove the exploitation of lignite as early as the 14th and 13th centuries BC, a good 1,000 years earlier than thought.”

Research of this kind is a reminder that humans began altering the planet on which they first evolved, almost as soon as they had tentatively launched any settled civilization—a process that involved agriculture, specialist technology, planned construction, and the long-distance trading networks necessary for metalwork in the Bronze Age. Bronze is an alloy of copper and tin, from metal ores rarely found in the same place.

So in the world rich in the legends of Agamemnon and Achilles and the stories of Old Testament, a new era called the Anthropocene had, imperceptibly, begun. To smelt metal and forge ploughshares or swords, craftsmen needed fuelwood, so the forests were cleared.

By 300 BC, Greeks clearly knew about lignite as a source of heat: the evidence is there in a treatise by Theophrastus, a disciple of Aristotle at Plato’s Lyceum in Athens, who wrote in On Stones: “Among the substances that are dug up because they are useful, those known simply as coals are made of earth, and they are set on fire and burnt like charcoal. They are found in Liguria, where amber also occurs, and in Elis as one goes by the mountain road to Olympia; and they are actually used by workers in metals.”

So the new finding merely pushes to a much earlier date the opening episodes of a civilization at first powered by, then threatened by fossil fuels. But this evidence of the first use of coal in the western world is only a part of the story told through the teeth of the long-dead. The lignite used in Chania came from western Crete. The lignite used in the citadel of Tiryns had the chemical signature of deposits near Olympia—birthplace of the Olympic games—more than 100 kilometres west. So the teeth tell a story, too, of routine cross-country transport of bulk materials.

Lignite can be found much nearer, at Megalopolis, but it was probably too sulphurous for the purpose, so clearly Mycenae’s artisans and smiths had some grasp of chemistry at a practical level. High-quality ceramic pottery made in Mycenae has been found as far away as Spain and Syria, so the finds suggest the emergence of industrial mass production.

“We now have to rethink resource management in Bronze Age Greece,” said Philipp Stockhammer of Ludwig Maximilian University in Munich, who leads the five-year research program. The same study also unearthed tantalizing evidence of what might now be called an equal opportunities culture.

“We discovered another very surprising thing,” Buckley told The Energy Mix. “Some of those who had been actively working in these industries were women: not just men. This was confirmed not only by traces of lignite in the deposits on their teeth, but they also had well developed right arms, and evidence of arthritis.”