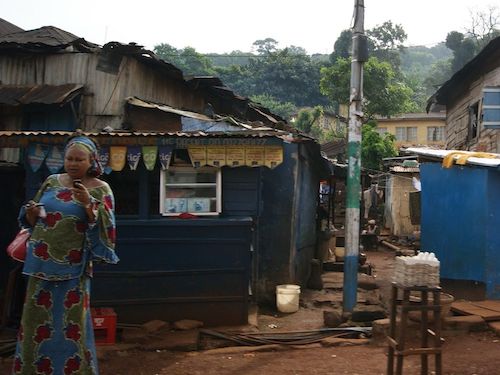 In an effort to address a lethal and worsening intersection between extreme heat, overcrowding, and poverty that is rapidly eroding health and security for at least 35% of its population, the city of Freetown, Sierra Leone recently appointed Africa’s first chief heat officer.

On the job since November after a few years as an advisor to Freetown Mayor Yvonne Aki-Sawyerr, Eugenia Kargbo is leading her city’s effort to plant a million trees and build 48 urban gardens by the end of the year, reports Bloomberg CityLab.

She is also working with telecommunications companies to provide weather warnings, and building cooling centres in Freetown’s cruelly hot slums, while collecting and analyzing heat impact data for a city whose population of 1.2 million is growing rapidly.

Kargbo’s new position as Freetown’s official heat officer is one of three established globally last year (the others are in Athens and Miami-Dade County), made possible by funding from the Adrienne Arsht-Rockefeller Foundation Resilience Center.

The heat officer positions are expected to last for a year or two, but may well be extended in especially fragile places like Freetown. CityLab says the foundation’s senior vice president, Kathy Baughman McLeod, “expects one to be on every continent by the end of the year.”

The urgent need for dedicated heat officers is clear. A 2021 study in the Proceedings of the National Academy of Sciences found that “extreme heat exposure in 13,115 cities nearly tripled between 1983 and 2016, affecting 1.7 billion people,” CityLab writes. The researchers found that the health risk of extreme heat is “highly unequal and severely impacts the urban poor.”

Those findings hit home in a city like Freetown, whose population has exploded in recent years due to a civil war, climate change-related crop failures, and rural poverty, all in a country with an average life expectancy of 54.7 years as of 2019. Some 35% of the city’s residents now live in 74 informal settlements, typically located on slide-prone hills or near malarial swamps They’re generally composed of one-room, heat-trapping tin shacks pressed suffocatingly close together with little more than sewage and garbage-filled tracks running between.

For those forced to live in such squalid conditions, the risks are all too clear: flooding and mudslides killed more than 1,000 slum dwellers in 2017,, and a fire last March left more than 7,000 homeless.

During Sierra Leone’s dry season from December to April, with temperatures regularly spiking over 40°C, “it feels like we’re being cooked alive,” said 34-year-old Marima Barrie, who lives with her three children in a one-room tin hut in the Freetown slum of Kroo Bay. We’re cooking like pigs in here,” she told CityLab.

Traumatizing to the human body, extreme heat also hammers the economy. According to a 2019 study by the World Meteorological Organization, extreme heat impacts stand to cut Africa’s overall GDP by 2.25 to 12.12%.

Kargbo will also be playing a vital public relations role in helping those most vulnerable to heat stress understand what they are experiencing—right down to making the link between the temperature in their tin hut and the climate crisis—and in championing all efforts to cool things down.