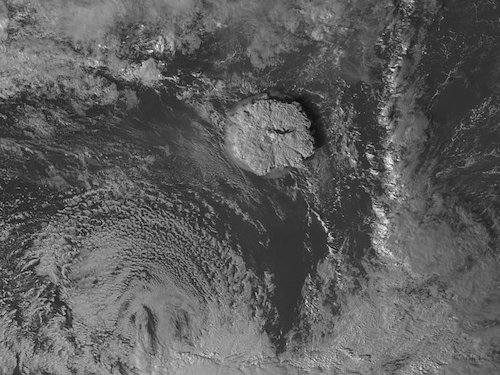 As Tongans begin the difficult work of recovering from the one-two punch of a volcanic eruption and subsequent tsunami, experts warn that the low-lying island archipelago’s suffering foreshadows worse to come as global heating drives sea level rise and an increasing rate of super storms.

Not that the country needed any reminding. Last November, Tongan delegates told other countries at the COP 26 climate summit that allowing global heating to exceed 1.5°C “would spell absolute catastrophe for Tonga,” as it and its fellow island nations would be unable to escape being swallowed by rising seas.

The risk of devastation for the South Pacific island nation grows. According to the UN’s Global Sea Level Observing System, the waters are rising throughout the Tongan archipelago at about 6 millimetres per year, nearly twice the global average.

“While we are resilient and trying to adapt, it only takes a few extra metres of water to cover a house, to kill a child or family,” Shairana Ali, CEO of the international charity Save the Children in neighbouring Fiji, told Reuters.

And the odds of that “few extra metres of water” smashing ashore grow in tandem with the likelihood of super-heated cyclones. The average daily temperature in Tonga is now 0.6°C higher than it was 40 years ago, and warmer days means warmer waters incubating ever more devastating storms.

“Tonga and neighbouring countries were battered by two Category 5 cyclones in the last four years, resulting in hundreds of millions of dollars in damage,” as well as the destruction of “natural buffers against rising seas, such as coral reefs and mangroves,” writes Reuters.

Despite only a marginal contribution of 0.03% to historic climate pollution, Pacific Islanders are expected to be among the first climate refugees as their home countries succumb to the rising sea. While it may “eventually come to that,” Josephine Latu-Sanft, an expatriate Tongan who now works in London as a climate communicator, told Reuters she hopes it won’t.

“Tongans are very resilient,” she said. “We’ve lived there for centuries. Our roots and identity are in the land and in the sea.”

Elsewhere, Peruvians are reeling from the impacts of an oil spill that occurred when a tanker owned by Spanish fossil giant Repsol was hit by the same tsunami that devastated Tonga. Peru has declared a 90-day “ecological emergency” to try to expedite cleanup of more than 20 beaches ravaged by the 6,000-barrel oil spill, which apparently occurred while the tanker was unloading its cargo at the country’s largest refinery in the town of Ventanilla, near Lima, France24 writes.

Incensed over the apparent absence of a contingency plan to deal with such a spill, Peru’s foreign ministry is demanding that Repsol pay compensation for all damages, including the decimation of local fishing industries. Official estimates indicate the spill “has harmed some 18,000 square kilometres of protected zones containing a variety of rare plant and animal life,” the BBC says.

To date, Repsol has denied responsibility for the spill, claiming the Peruvian government failed to warn the company of rough waters from the eruption. The company says it is “deploying all efforts to attend to the remediation of the spill.”