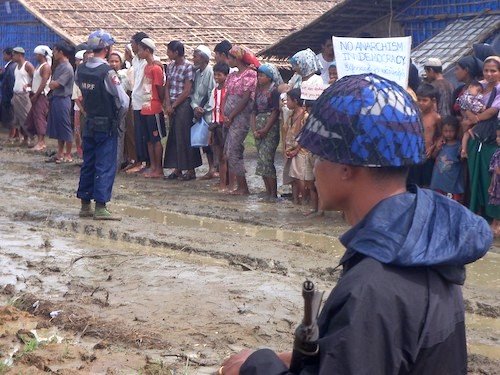 As colossal fossils TotalÉnergies and Chevron Oil withdraw from Myanmar, citing the ongoing brutality of the ruling junta against protesters, campaigners say oil and gas companies have been complicit in propping up the violent regime.

In withdrawing from the Yadana gas field, located 60 kilometers off Myanmar’s southwestern coast, and from the MGTC pipeline which carries extracted gas from the Yadana to the Myanmar-Thailand border, Total and Chevron have become the latest Western corporations to exit the country in the wake of the February 2021 coup, reports the Globe and Mail.

Citing the steady erosion of human rights and “more generally the rule of law,” Total said in a statement that “financial considerations have never been crucial in this matter,” with operations in Myanmar generating less than 1% of its annual revenues.

“In light of circumstances in Myanmar,” Chevron added, “we have reviewed our interest in the Yadana natural gas project to enable a planned and orderly transition that will lead to an exit from the country.”

TotalÉnergies holds the biggest stake (31.24%) in Yadana. The project produces roughly six billion cubic metres per year of gas, 70% of which is exported to Thailand via the MGTC. The remainder goes to the Myanmar Oil and Gas Enterprise (MOGE), a state-owned entity that holds a minority stake in the field, together with PTTEP, a division of the Thai national energy company PTT. Chevron holds a 28% stake.

While it joined other human rights groups in welcoming the decision to cease operations in Myanmar as “a victory for the people,” environmental law non-profit EarthRights International warned that the fossils still had much to answer for.

“Since the beginning of the coup, Total and Chevron have facilitated the transfer of around half a billion US dollars in revenue payments to the military junta,” the organization said in a release. “These payments are the military’s largest source of foreign funds and fuel its human rights atrocities.”

The New York Times reports that TotalÉnergies declared it “materially impossible” to prevent Yadana field revenues from reaching junta coffers because it was PTT, not Total, that was responsible for most of the gas sale payments.

Noting that the fossils’ “belated calls for sanctions and decision to divest arrive many months after international observers highlighted that crimes against humanity were taking place,” EarthRights added that “Total and Chevron will remain complicit for as long as they make or facilitate payments to accounts controlled by the junta.”

To prevent those financial flows, EarthRights urged TotalÉnergies to “be careful not to enable another operator to step in that would allow the revenues to continue flowing to the junta” as it exits. That would mean ordering PTT—apparently the most likely candidate to assume Total’s share in the field—to “stop transferring gas revenues to accounts controlled by the illegal junta, and to instead direct them to protected accounts where they can later be accessed by a future, legitimate government.”