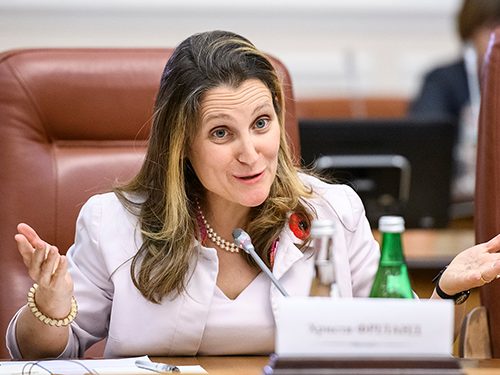 Secretariat of the Cabinet of Ministers of Ukraine/Wikimedia Commons

The federal government’s plan to introduce a tax credit for carbon capture, utilization and storage (CCUS) technology hit the top tier of the Canadian climate agenda this week, after more than 400 climate scientists and other academics wrote to Deputy Prime Minister and Finance Minister Chrystia Freeland urging her to drop the idea.

Earlier this week, Natural Resources Minister Jonathan Wilkinson confirmed to Bloomberg News that the tax credit is on the way, and will likely be included in Freeland’s next budget. Yesterday, Freeland spokesperson Adrienne Vaupshas told The Canadian Press the credit was intended to reduce the country’s greenhouse gas emissions by at least 15 million tonnes per year.

“Consultations with the industry and other stakeholders with respect to the design of this CCUS measure have been positive and productive,” she said.

But while CP says the Canadian Association of Petroleum Producers is looking to taxpayers to cover three-quarters of the C$75-billion price tag for CCUS development, the 400+ academics said the plan is doomed to fail.

“Deploying CCUS at any climate-relevant scale, carried out within the short time frame we have to avert climate catastrophe without posing substantial risks to communities on the front lines of the buildout, is a pipe dream,” declared the group of signatories led by Dr. Christina Hoicka, Canada Research Chair in Urban Planning for Climate Change at the University of Victoria.

“We must instead move forward with proven climate solutions that will contribute the most to emissions reductions: increased electrification, wide-scale use of renewable energy, and intensifying energy efficiency.”

The academics called the proposed tax credit a “substantial new fossil fuel subsidy” that would contradict the Trudeau government’s commitment to a subsidy phaseout by 2023, favouring a technology that has failed to prove its worth.

“Despite decades of research, CCUS is neither economically sound nor proven at scale, with a terrible track record and limited potential to deliver significant, cost-effective emissions reductions,” they wrote.

By contrast, “effective solutions to achieve deep emission reductions in the next decade along a pathway to zero emissions are already at hand, including renewable energy, electrification, and energy efficiency. Funding CCUS diverts resources from these proven, more cost-effective solutions that are available on the time frames required to mitigate climate change.”

With four of every five CCUS projects in the U.S. declared a failure, and 81% of the carbon captured to date injected underground to force more oil to the surface through a process called enhanced oil recovery (EOR), “carbon capture for the oil and gas sector is not a climate solution,” they added. “At best, it prevents some carbon dioxide from polluting facilities from reaching the atmosphere, but it is not a negative emissions technology. Despite the billions of taxpayer dollars spent by governments globally on CCUS, the technology has not made a dent in CO2 emissions.”

Hoicka told CP she was pleasantly surprised to see so many of her colleagues endorse the letter in just a few weeks. “This is one of the largest groups I’ve seen sign a letter of this type in Canada,” she said.

One of the signatories, Jason MacLean, contrasted the tax credit with the rest of the climate action agenda the government has been putting forward.

“What’s so jarring and troubling about this tax credit, besides the fact that it will be completely counterproductive from a climate policy perspective, is that the government appears poised to roll it out when it is otherwise in the process of conducting consultations on its first Net-Zero Emissions Plan under its recently enacted Net-Zero Emissions Accountability Act,” wrote MacLean, an assistant professor in the University of New Brunswick Faculty of Law.

“Canada needs an integrated, internally coherent, and evidence-based whole-of-government approach to climate policy-making that moves rapidly towards decarbonization and sustainability,” he told The Energy Mix in an email. “The design and communication of this tax credit undermines this imperative.”

Ottawa also “appears not to have learned anything from the American experience with substantially the same tax credit,” MacLean added. The Section 45Q tax measure in the U.S. “may actually be increasing enhanced oil recovery and therefore GHG emissions, and many of the credits claimed in the U.S. are for unverified tons of captured carbon. Not only is the credit poor climate policy, it is poor fiscal policy, as well.”

“The federal government, I think, really has a choice to make,” Emily Eaton, associate professor of geography and environmental studies at the University of Regina, told CP “Either join countries around the world and plan for a managed phaseout of oil and gas, or it can prop up this industry with this unproven technology, and extend the life and also the emissions of the fossil fuel sector indefinitely.”

Eaton and MacLean both pointed to the 80% of the emissions from oil and gas that are unaffected by CCUS, since they occur after the end product is shipped to user and burned. Prolonging fossil production while the rest of the world decarbonizes would also increase the risk of CCUS installations becoming “stranded assets”, MacLean told Bloomberg News.

While the federal government is pushing ahead with consultations on the tax credit, Julia Levin, senior climate and energy program manager at Environmental Defence, said there’s still time for initiatives like the Hoicka letter to shift the final decision.

“It’s not done and baked,” she said. “We know with government, and with the budget more generally, that the last week [before an announcement] can be incredibly influential, and we’re still months away from it.” The fossil lobby will be stepping up pressure to get the tax credit in place, “so it’s really important that the critics who feel cautious about investing in carbon capture also get their voices heard right up to the last minute.”

EV Owner’s Questions About Gas-Powered: ‘I Hear I Can’t Refuel at Home?’ [Humour]