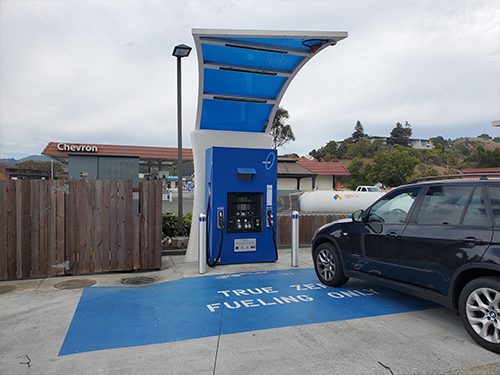 “Clean hydrogen is seen as a potential silver bullet to decarbonize industries like steel and chemicals, which cannot fully electrify and need energy-dense fuels to generate high-temperature heat for their industrial processes,” Euractiv reports.

At an event earlier this morning, Clean Energy Wire reports, energy and climate state secretary Patrick Graichen said the country may obtain the “blue” product from Norway for a transitional period. “We will go for green hydrogen in the long term, and whenever we put money on the table, it will be for green hydrogen,” he told a panel discussion on energy cooperation between the two countries, hosted by the Association of German Chambers of Commerce and Industry and German Chambers of Commerce Abroad.

That’s despite concerns from Germany’s oil and gas lobby, the European Commission, and non-profits like the U.S. Clean Air Task Force that “green” hydrogen produced from renewable electricity can’t scale up in time to do its part to reduce emissions.

The problem is that, “despite all its supporters, blue hydrogen struggles to shake off its dirty secret: the fact that fossil gas is a key material in its creation, with all the issues it entails,” Euractiv explains. “Gas, imported primarily from problematic states like Russia, tends to leak from pipelines which has severe climate impacts, as methane is a potent greenhouse gas.”

Europe, in particular, has been focused on that geopolitical connection in recent weeks, with International Energy Agency Executive Director Fatih Birol accusing Russia of orchestrating the continent’s energy price crisis by withholding up to one-third of its fossil gas exports, The Guardian reported last week.

“We believe there are strong elements of tightness in the European gas market due to Russia’s behaviour,” Birol told media. “I would note that today’s low Russian gas flows to Europe coincide with heightened geopolitical tensions over Ukraine.”

In his announcement last week, Habeck tipped an €8-billion program, including new subsidies, to double Germany’s hydrogen capacity by 2030, from 5 to 10 gigawatts (GW). “We need a massive ramp-up of hydrogen,” he said, noting that the country’s steel industry alone will need five times more hydrogen than the country currently plans to produce.

However, “for proponents of blue hydrogen, the German plan makes for tough reading,” Euractiv writes. “Oil and gas industry representatives have come out strongly in favour of blue hydrogen, and even the European Commission said it will be needed in the transition to a fully renewable-based hydrogen economy.”

An industry analysis released last year found that Europe could save €2 trillion by 2050 if it used existing gas infrastructure to produce hydrogen, the publication adds, and blue hydrogen proponents also argue “that it can help break the chicken-and-egg problem, where a lack of hydrogen production leads to a lack of demand.”

But even so, “I think for an investor, blue hydrogen will look very risky,” said Hydrogen Science Coalition co-founder Tom Baxter, and serious doubts about the viability of CCS technology only add to the concern.

“We find that emissions from gas- or coal-based hydrogen production systems could be substantial even with CCS, and the cost of CCS is higher than often assumed,” stated a study earlier this month in the journal Applied Energy.

After Birol’s media statements last week encouraging Canada to embrace CCS as a path to keep increasing its fossil fuel production, analyst David Schlissel of the Institute for Energy Economics and Financial Analysis said the technology is worth researching for sectors like steel and cement—but it isn’t ready to scale up for use in the fossil industry.

“The correct answer is, no, it isn’t,” he told The Energy Mix. “Even if the proponents were correct that it’s been shown in a place like Boundary Dam, it’s only been shown in very short spurts, literally days where they’ve run at full capacity. And what you’re talking about is installing carbon capture technology in these facilities where you want it to run all the time, as much as possible, for years and years and years. That’s not proven today.”

“Do not be fooled,” he wrote. “Blue is not the new green. The emissions from blue hydrogen are still staggeringly high. Combined total GHG emissions are still more than those from using either coal or natural gas directly for energy. And emissions of leaked methane are rife throughout the process.

Permafrost Thaw Could Threaten Half of Arctic Infrastructure