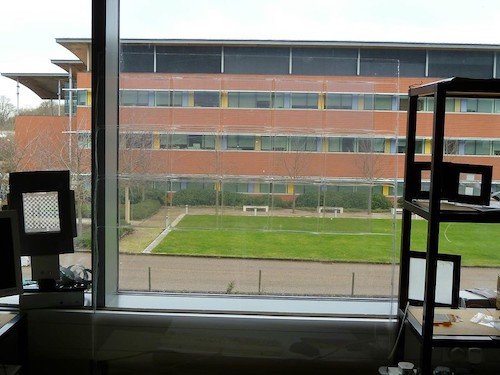 Department of Engineering, University of Cambridge/flickr

The day of the sun-powered house may soon be at hand, with two recent papers introducing new technologies to allow the building itself—rather than the solar panels attached to it—to produce heating and cooling.

Singapore scientists have fashioned a smart glass window coating that can help keep the home cool in high summer, and contain warmth when the thermometer drops.

And on the same day, in the same journal, researchers in the United States announced a roof coating that can automatically respond to air temperature changes. That is, it could provide what is in effect air conditioning or heating according to need.

Neither achievement is anywhere near ready for market. Both have been tested only in the laboratory, and in simulated systems. The tests show that in theory, they could work effectively across all the seasons and in many of the world’s climate zones, and at the same time save huge quantities of energy in the world’s cities.

Both papers are published in the journal Science. Each is yet more testimony to the explosion of inventive thinking and technical ingenuity on show in the world’s laboratories and universities, as researchers seek new ways to deliver clean energy, or to save it, or to recover it.

The first study reports on a window glass treatment that represents a potential energy-saving advantage of 9.5% over other low-emission window panes. The other—if applied to the roofs of U.S. households—could potentially save up to 10% of the electricity bill for household temperature control.

Buildings play a huge role in the climate crisis. In the UK, they have been implicated in 17% of all national greenhouse gas emissions: most of that to keep them warm. In the U.S., the heating and cooling associated just with the windows of buildings—the traffic of energy through the panes—has been put at 4% of all the primary energy use of all buildings. and architects and designers have been experimenting with glass coatings engineered to either retain heat or to prevent overheating.

But the scientists in Singapore report that theirs is the first to modulate both heating and cooling, according to need. They used nanotechnology to combine vanadium dioxide, a transparent thermoplastic called poly(methylmethacrylate) or PMMA, and a low-emission coating in a way that would suppress the near-infrared light associated with the sun’s heat, while boosting the cooling capacity of long-wave infrared transmission in the other direction.

“Our team has demonstrated for the first time a glass that can respond favourably to both wavelengths,” said principal investigator Long Yi of Nanyang Technical University, “meaning it can continuously self-tune to react to a changing temperature across all seasons.”

Researchers based in the U.S. and Canada report, too, that they have now devised a roof for all seasons: one coated with a layer that will automatically keep the inhabitants warm or cool according to the outdoor air temperature. Their thermally-adaptive radiative coating also exploits the versatile properties of vanadium dioxide: a compound that is transparent to light below 67°C, but absorbs thermal-infrared light above that limit. That is, it counts as a phase-change material.

The scientists found that if they switched a small percentage of the vanadium with tungsten, they could reduce the phase change temperature to 25°C. They then fashioned a three-layer coating of silver, covered by barium fluoride and then their doped vanadium dioxide, and set up a rooftop experiment. Then they used 10,000 building energy simulations to see how it might work in 15 different climates in the continental U.S.

“This is energy-free, emission-free air conditioning and heating, all in one device,” said study lead Junqiao Wu of the Lawrence Berkeley National Laboratory in California.

“A few years ago I wondered, if only there were a material that could automatically switch between radiative cooling in hot weather or heat retention in cold weather. And then I thought, vanadium dioxide can do that.”

6 in 10 Americans Alarmed or Concerned About Climate, Study Finds