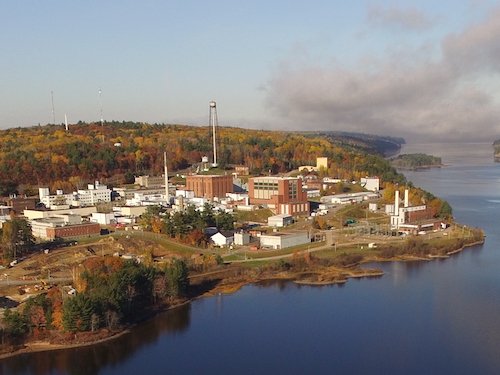 Canada’s nuclear regulator is about to hold wholly-inadequate hearings on building a controversial 60-foot-high mound for one million cubic metres of radioactive and hazardous wastes, with the potential to leak for millennia into the Ottawa River—a drinking water source for millions of Canadians in Ottawa, Gatineau, Montreal, and other downstream communities

Euphemistically called a “Near Surface Disposal Facility”, or NSDF, the mound would be on unceded Algonquin territory, on a hillside adjacent to a lake and wetlands that drain into the Ottawa River a kilometre away. An environmental impact statement (EIS) ordered by the Canadian Nuclear Safety Commission (CNSC) says that without mitigation practices, “leakage of leachate or other releases of substances may affect surface water quality at downstream locations,” but then goes on to say that these changes are not expected to have significant impact on human health or aquatic biodiversity.

The EIS lists a number of possible threats to the mound’s integrity, including earthquakes, floods, fires, tornadoes, malfunctions, and accidents. At each count, the (EIS) concludes that the risks are “not significant” thanks to the facility’s proposed design features, monitoring plans, and mitigation strategies like treating effluents.

The CNSC has never refused to grant a licence, according to a memo obtained by the Canadian Coalition for Nuclear Responsibility. The Expert Panel on Reform of Environmental Assessment noted in its final report that CNSC is widely seen as a captured regulator that promotes the projects it is supposed to regulate.

The surface-level nuclear mound idea was put forward by Canadian Nuclear Laboratories (CNL). In 2015, ownership of CNL was transferred from Atomic Energy of Canada Limited (AECL) to SNC-Lavalin and Texas-based Fluor and Jacobs through a 10-year, multi-billion-dollar AECL contract issued by the Harper government.

The mound is central to CNL’s strategy to reduce AECL’s C$16-billion nuclear waste clean-up liability as quickly and cheaply as possible. This federal nuclear liability has grown despite billion-dollar annual appropriations to AECL, which AECL hands over to CNL’s multinational owners.

The CNSC has signalled its approval of the NSDF by scheduling a two-part licencing hearing for February 22 and May 31,2022. A licencing document and an Environmental Assessment report will be released on January 24. CNSC’s licencing document will likely say the NSDF project is consistent with requirements of the Nuclear Safety and Control Act. CNSC’s EA report will likely repeat the assertion that the NSDF project “is not likely to cause significant adverse environmental effects”, or that the significant adverse environmental effects it is likely to cause are justified in the circumstances.

The CNSC initially also promised a public hearing and a public comment period on its EA report, but later eliminated them. Public participation in CNSC licencing hearings is a mere formality.

There are many problems with the proposed project.

The NSDF location was chosen without a proper siting process, even though the International Atomic Energy Agency (IAEA) says siting is a “fundamentally important activity in the disposal of radioactive waste.” Proximity to contaminated structures awaiting demolition at AECL’s Chalk River Laboratories—not environmental protection—seems to have been the priority.

Use of the term “NSDF” misrepresents the proposed facility. The EIS says it would be an above-ground mound “similar to a municipal landfill.” The IAEA says landfills are suitable only for very low level waste that has “very limited concentrations of long-lived radionuclides,” and that a “disposal facility at or near the surface makes it susceptible to processes and events that will degrade its containment and isolation capacity over much shorter periods of time.”

The waste inventory in the EISshows 23 of 31 radionuclides with half-lives exceeding 1,600 years, including man-made reactor products such as americium, neptunium, plutonium, and technetium. Much of this waste dates back to the Cold War era when Chalk River Laboratories produced materials for U.S. nuclear weapons. AECL’s NRX reactor experienced a partial meltdown in 1952. An above-ground mound is simply not capable of containing and isolating wastes like these for the duration of their radiological hazard.

The EIS says the mound would experience degradation as a result of “normal evolution”. That means mixed radioactive and hazardous industrial wastes (arsenic, beryllium, mercury, benzene, dioxins, PCBs, etc.) would leak into the Ottawa River, essentially forever. Future generations might be tempted to scavenge for scrap metal in the mound—an estimated 33 tonnes of aluminum, 178 tonnes of lead, 3,520 tonnes of copper, and 10,442 tonnes of iron.

Cobalt-60 would emit the highest amounts of radiation by far during the first 50 years of operation (99% of the total). CNL proposes to allow unlimited quantities of this powerful “short-lived” gamma-emitter in certain “packaged” wastes. Cobalt-60 is used in high-activity gamma irradiation sources for food sterilization and cancer treatment. Owing to cobalt-60’s 5.3-year half-life, these devices are no longer useful after 20 years but remain highly radioactive. They are sent back to Canada and stored at Chalk River.

CNL wants to put these “disused sources” in the mound, even though the IAEA requires their disposal at depths “of at least tens of metres”. And more are coming from around the world: a 2021 federal report says Canada supplies “approximately 95% of the global demand”.

The EIS does not mention that such commercial industry wastes would go in the NSDF. Nor does it discuss the worker safety and environmental risks created by cobalt-60 and the hundreds of tonnes of lead required to shield it.

Overall, the EIS contains minimal information on the wastes that would go into the mound. It refers to waste “packages” that could range in size up to intermodal shipping containers. Some packages supposedly would be “leachate controlled”, but no evidence or details are provided that they would withstand the heavy equipment (bulldozers, rollers) used to compact the mound.

Because the mound’s contents would be exposed to wind, rain, and snow during a 50-year operating phase, the project includes a water treatment plant to remove leachate contaminants. Tritium, the radioactive form of hydrogen, would not be removed. Partly treated leachate would be discharged into wetlands or into nearby Perch Lake through a pipeline. Both are already contaminated by groundwater plumes from existing leaking waste areas.

Despite assertions that the NSDF project would remediate “historically contaminated lands”, remediation plans are not included. Available data indicate that the leaking waste areas already contain far more radionuclides than a “licenced inventory” would allow in the NSDF.

A former AECL staff member says CNL does not rigorously track its wastes and has inadequate waste characterization and waste segregation procedures. This raises concerns about CNL’s capacity (and willingness) to adhere to the licenced inventory.

A Financial and Environmental Disaster

The CNSC’s mandate does not include cost-effectiveness. The $750-million cost estimate in the EIS lacks credibility. Canada has no experience with permanent radioactive waste disposal. Why build such an expensive facility that would do little to reduce the federal nuclear liability, would not conform to international safety standards, and would pollute the Ottawa River?

Seven environmental petitions related to the NSDF have been filed with Canada’s Auditor General, who anticipates publication of a nuclear waste management audit this year.

As Canada’s first-ever facility for permanent disposal and eventual abandonment of nuclear reactor waste products, the NSDF would set a very poor precedent for future facilities to come. The Auditor General’s nuclear waste management audit and NRCan’s policy modernization process should conclude before the CNSC holds licencing hearings for the NSDF. Their results may help prevent the NSDF from becoming a financial and environmental disaster that would permanently contaminate one of Canada’s most treasured heritage rivers.

Retired forest ecologist Ole Hendrickson is a researcher with Concerned Citizens of Renfrew County and Area.

Explainer: Reliable, Clean Grid Can Be 100% Renewable, Despite Skeptics’ Fears for Reliability