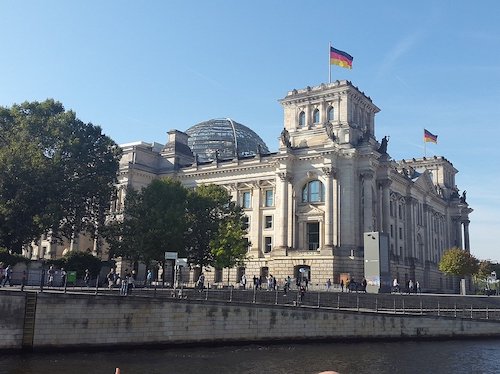 Germany’s term in the G7 presidency could be the beginning of a “grand bargain” on climate and international health among the world’s richest nations if the new government of Chancellor Olaf Scholz follows through on plans to push for a global “climate club” over the next year.

“When it comes to the new government’s energy and climate policy, all eyes have been on the massive domestic tasks for the coming years, such as the rapid rollout of renewable energy sources or the long-overdue transformation of the country’s transport sector,” Clean Energy Wire reports. “However, Chancellor Scholz’s coalition has made it clear that it sees the transition to climate neutrality as a global necessity and a challenge which needs to be tackled together with European and international partners—and in solidarity with poorer nations.”

To get that done, the new Social Democratic-Green-Free Democratic coalition “will have to hit the ground running on the international stage,” the Berlin-based climate digest adds. “The Group of Seven (G7) presidency in 2022, crucial decisions at the European level, and the challenges of climate diplomacy will require immediate attention as well as resolve from the team of newcomers.”

“We want to use our combined efforts to support developing and emerging countries in the transition away from coal, oil, and gas and towards renewable energy sources,” said Development Minister Svenja Schulze, adding that the work would be guided by just transition principles.

“I would like to work with you to bolster the influence of the Federal Foreign Office,” Foreign Minister and Green Party co-leader Annalena Baerbock told the new cabinet, “especially when it comes to international climate policy.”

“You never walk alone, strong cooperation,” she added, ahead of a meeting of G7 foreign ministers last month. “This will be the guiding principle of Germany’s G7 presidency for sustainability, human rights, and future viability.”

Economist Dennis Snower, founder and president of the Global Solutions Initiative think tank alliance, suggested one possible formula for the G7 to strike a “grand bargain” to combat climate change and the COVID-19 pandemic. In a Q&A with Clean Energy Wire, he suggested that G7 members help developing countries set up their own manufacturing capacity for vaccines and protective equipment in exchange for their cooperation on climate action.

“Look, it is unavoidable that while climate is obviously a really important issue, global health and economic recovery are going to be major issues as well,” Snower said. “The big challenge lies in making these issues consonant with one another.

While “it is very common to say that health policy pulls in the opposite direction from economic policy,” he added, that’s a false division, just like the notion that climate, economic, and social policy must be traded off against each other.

“We have to start think about what is socially acceptable climate action,” Snower continued. “That involves mixing relevant policy fields and stop silo thinking. One thing you absolutely need to get this going is for people to feel empowered that they are contributing to climate action in a meaningful way that will improve their lives. It is possible to break this down to the local level. People around the world, the different cultures, would tackle this in different ways, of course. The G7 Is a good starting point to coordinate this.”

To help make that happen, he said, the G7 can “kickstart the process that involves the developing world, as well”, then mobilize the G20 to play an “active role within the wider community of nations”. That would be the beginning of a “climate club with effects that go far beyond the G7”.