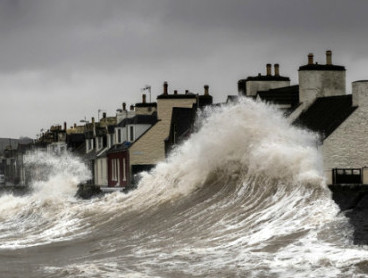 The United Kingdom’s poorer regions are particularly ill-prepared for the intensifying flood risks posed by the climate crisis, says a new report which describes the country’s serious lack of urban drainage as a “national resilience” issue.

Inundation is “one of the most serious climate-related risks” the U.K. faces, states the report [PDF] which comes after the U.K. was hit by several bouts of severe flooding that damaged homes and forced thousands to evacuate properties.

Using a form of artificial intelligence called Natural Language Processing, environment and natural resource economist Helen Jackson analyzed some 7,800 newspaper articles from more than 60 local, regional, and national news services for information on flood events and their impacts on public services, infrastructure, and businesses large and small, writes The Independent.

And the nation’s poorest are the least prepared, she said, with the risk augmented by a significant drop in flood investment in deprived areas since 2014.

Myopic policy decisions are not the only problem, however. The Independent cites a report last year from England’s Environment Agency which found that an estimated 66% of residents living in areas of high flood risk did not believe that they themselves will ever need to flee before rising waters.

Ignorance or naivete—likely driven by a lack of means that leads people to shy away from asking potentially expensive questions—are also part of the mix.

Jackson found that people are often unaware that they are responsible for property-level flood defences, and that their surprisingly cheap property insurance doesn’t cover floods.

In addition to destroying individual lives and families, such blind spots stand to do great collective damage.

“Low financial resilience through lack of insurance and other financial impacts from flooding has the potential to impede the economic recovery and development of the community as a whole in the long term,” Jackson wrote.

Urging the need to recognize that flooding is a communal trauma, she warned, “we need to move away from an old concept of flooding—an unfortunate event affecting individual properties which by and large fully recover via insurance—and recognize the potential compounding impacts of repeat flooding on communities’ economic welfare over the longer term.” Sketching something of the government’s response to the evidently escalating problem of flooding, The Independent reports that Whitehall has allocated £5.2 billion (C$9 billion) toward better protecting homes and businesses from flooding and coastal erosion over the next six years, an investment that is expected to “bolster defences for more than 300,000 properties.”