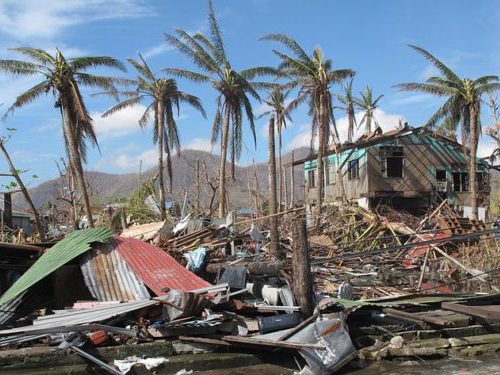 Four hundred people killed and over half a million displaced, 830,000 houses damaged, and millions of dollars’ worth of crops, farmland and infrastructure wrecked—that’s the price the Philippines paid for greenhouse gas emissions from the developed world, when a climate-aggravated Typhoon Rai hit its coast last December.

“Poor countries and poor communities remain the victims of anthropogenic climate injustice,” writes Arnel Murga in The Guardian, explaining that while the Philippines contributes less than 0.4% to the climate crisis, the global north—the world’s richest and most industrialized countries—is responsible for 92% of annual global carbon dioxide emissions.

Even as humanitarian organizations plead for aid, the countries responsible for the lion’s share of emissions have not delivered on the US$100 billion in climate finance they promised in 2009.

When Category 5 cyclone Typhoon Rai hit the Philippines “like a freight train,” nearly 390,000 farmers and fishers had their crops flattened, fishing boats smashed, or livestock killed or lost. “They have been left with nothing,” Oxfam Philippines Country Director Lot Felizco said. And such storms are becoming both more frequent and more intense because of climate change.

The island nation of Philippines experiences an average of 20 typhoons and extreme storms per year, yet many communities lack resilience to withstand the frequent beating from weather events. People rebuild from scratch after storms destroy their homes, only to see them destroyed again. Murga relates the personal impacts of living in these conditions and recounts how, like many of his peers, he and his family “lived in fear and carried the trauma from the danger the calamities posed.”

The national government still does not protect natural defences, despite years of recurring extreme weather events. “Dams have been built on ecologically important rivers; dolomite mining continues, and new coal-powered plants are still being built,” writes Murga. And systems for getting storm warnings and weather information out to the public are ineffective, after the country’s media were undercut by a government refusal of a franchise renewal, which many aw as politically motivated, Murga says.

Many people had no access to vital news when telecommunications failed, turning instead to Facebook groups where “news feeds were flooded with posts from those in need.”

“People wandered the streets with signs saying they were hungry and thirsty,” Murga writes. “Many died of dehydration. Flooded cities have become ghost towns; houses have been buried by landslides.”

Noting that the Philippines’ next election is in May, he calls on the country’s citizens to elect a new leader to demand “accountability from the global north and strengthen the country’s defences.”

Oxfam is calling for €4 million in humanitarian aid to respond to the crisis. But if it materializes, that money will only attend to the current crisis. Until the root of the problem is addressed, developing countries will continue to suffer disproportionately from other nations’ emissions without proper accountability measures, says Murga.

With their 2009 climate finance pledge, developed countries did appear to assume accountability for their emissions, he adds. But negotiators never specified how contributions would be measured, or how much individual nations should pay, and so the promise remains unfulfilled, as wealthy countries debate the terms of the agreement. Not only is the global north dragging its feet on payment, but its privileged members seem unwilling to change their polluting ways, Murga says.

“The process of ending the human activities responsible [for climate change] is weak and slow; there is only disaster risk reduction management and mitigation in place,” he concludes. “As long as the world does not address the root cause of this crisis, we will not be prepared for what is coming.”