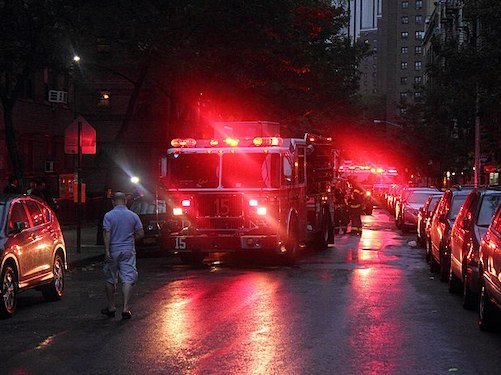 A devastating weekend apartment fire in the Bronx proves that energy efficiency upgrades are as much about redressing longstanding, frequently brutal injustices as they are about cutting emissions.

Sunday morning’s fire at Twin Parks West, which has killed 19 people thus far, including nine children, was the deadliest New York fire in more than 30 years. Initial reports indicated the fire was caused by a malfunctioning space heater. The fact that a resident had to turn on additional heat was at the core of the problem, writes Gizmodo, explaining that residents living in affordable housing often have to improvise to stay warm. They may even have to turn on their gas stoves, even on a relatively mild winter day, increasing the risk of indoor air pollution, fire hazards, and carbon pollution.

Energy efficiency upgrades are one of the keys to slashing New York City’s emissions, 70% of which trace back to buildings. They would also go a very long way in preventing disasters like the fire and making the city a safer, more just place for residents.

“Lower-income households across the U.S. spend up to four times as much on utilities as wealthier ones, due mostly to inefficient systems in cheaper, historically disadvantaged housing,” Gizmodo writes, citing recent research from the American Council for an Energy-Efficient Economy. And those figures are “split along lines of race: Black, Indigenous, and Latino families spend much more than their white counterparts, partly a result of decades of unfair housing practices.”

All too often, those systems break down completely.

Citing local news from February 2021, Gizmodo says the heating system at Twin Parks East, a sister building to the one that burned last Sunday, had been out for months before reporters showed up.

And then there was the immediate cause of the Twin Parks West blaze, the space heater. The New York Times reports that the heating units, “particularly older models, are a well-known risk,” with the U.S. Consumer Product Safety Commission estimating their involvement in some “1,700 residential fires a year, resulting in roughly 80 deaths and 160 injuries.”

Citing a New York City housing survey, the Times adds that “low-income neighborhoods in the Bronx, Brooklyn, and northern Manhattan that are historically home to communities of colour have a higher percentage of residences that rely on supplemental heating sources.”

Early indications are that Twin Parks West blaze may also stand as further proof that such communities are more vulnerable than their white peers to lax laws and careless landlords.

Elaborating on what was known early on about how so many people could have died so quickly in the building, even as more than 100 firefighters arrived on the scene, the Times says it was “deadly smoke sucked into an internal stairwell, not flames, that overcame residents as they fled the building.”

While the fire itself did not spread very far, the smoke raced at speed through the malfunctioning door of the unit containing the space heater—though the door was left ajar by frightened tenants as they fled, it should have closed automatically. Then the smoke was pulled upwards by a draft from an open stairwell door on the 15th floor, like smoke up a chimney.

Records show that the 50-year-old building had ongoing problems with self-closing doors, though all complaints as of last year had been resolved.

But “there’s no guarantee that there’s a working fire alarm in every apartment, or in every common area,” district representative Ritchie Torres (D) told The Associated Press. “Most of these buildings have no sprinkler system. And so the housing stock of the Bronx is much more susceptible to devastating fires than most of the housing stock in the city.”

A later news report profiled 333 East 181st Street as a hub for New York City’s Gambian expat community, nicknamed “Touray Tower” for community leader Abdoulie Touray, then a 41-year-old Gambian diamond trader, who settled in the Bronx in the 1970s. “An erudite Islamic scholar by night, Mr. Touray moved into a third-floor apartment” in what was then a new, 19-floor building, the New York Times wrote.

“Soon, he was offering a place to stay, food, contacts for jobs and the occasional verse from the Quran to newcomers from his homeland,” the paper added. “Virtually overnight, an entire community sprouted around him. And the building became a kind of homeland-in-exile for Gambians fleeing oppressive dictatorship and crushing poverty.

By the time disaster struck, most residents of the building were members of the Gambian community. Those lost to the Bronx fire include all five members of the Dukuray family, who left Gambia more than a decade ago and found a home on the top floor of Twin Parks West.

“Haja, a mother of three, worked as a home health aide, while her husband, Hajie, took shifts at a fried chicken shop, intending to save and send money back to their homeland,” the Times writes,  citing a devastated relative of the family. The couple’s children were all born in the United States: Mustapha, who was just two weeks shy of his 13th birthday; Mariam, 11, and Fatoumata, 5.

Gizmodo says better days may lie ahead, citing policy proposals like President Joe Biden’s Green New Deal for Public Housing and his Homes for All Act. The two measures combined would “plunge trillions of dollars into addressing the backlog of repairs and doing new retrofits for inadequate existing housing and the construction of new affordable housing units.”

While Biden’s climate plan has been held up in the U.S. Congress, New York Governor Kathy Hochul’s announced US$24 million in funding in September for an energy efficiency pilot program to upgrade affordable housing in the city.”