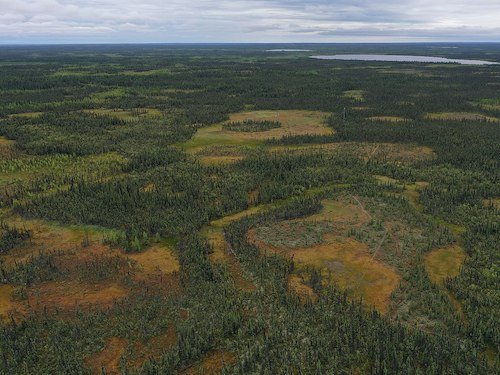 The vast peat deposits in Canada’s Northwest Territories store an estimated 24 billion tonnes carbon, equivalent to the emissions from nearly four billion barrels of oil, but the “globally significant” resource is imperilled by human activity, according to a recent study in the journal Frontiers in Ecology and the Environment.

The NWT’s peatlands cover 230,000 square kilometres and “provide a nature service that’s definitely required to give us a fighting chance” in the face of climate change, Steven Nitah, a senior advisor to the Indigenous Leadership Initiative, told CBC.

But the mid-November study led by Lorna Harris, a post-doctoral fellow and ecosystem scientist at the University of Alberta, shows that human activities like logging, mining, and agriculture, as well as wildfires and permafrost thaw, are dire threats to a critical carbon sink.

The peatlands’ carbon storage capacity makes the region a promising candidate for the federal government’s commitments to protect 25% of its land by 2025 and 30% by 2030. Only 12.5% of Canada’s land was protected by the end of 2020, according to latest figures from Environment and Climate Change Canada.

So the “first thing that needs to be done is to identify those important areas and to work across levels of government—Indigenous, territorial and federal—to protect and manage them,” Nitah said.

Noting that the federal government will “need to conserve or protect the quantum of land roughly the size of Manitoba” to fulfil its pledges, Nitah pointed to an opportunity for the NWT to advocate for land protection. Harris and her colleagues also cited Indigenous stewardship as a key solution to protect the carbon sequestration services provided by northern peatlands, CBC writes.

Both Harris and Nitah mentioned potential for carbon offset markets to place a value on peatlands’ carbon storage capacity. But Harris warned that incorrect design or use of those offsets could have precisely the wrong effect.

“You can go in and damage a peatland, and then any reduction in that damage is considered an offset,” she told CBC. “Whereas just leaving the peatland alone, without it being at risk of any damage, there’s no real value given to that.”

Moreover, peatlands can take thousands of years to reaccumulate after being stripped away. So “it’s dangerous to only put value on carbon when it’s part of a restoration activity for damage that’s already being done, especially when it comes to peatlands,” she warned. “Restoring them now is not going to gain enough carbon that was lost from the damage that was caused.”