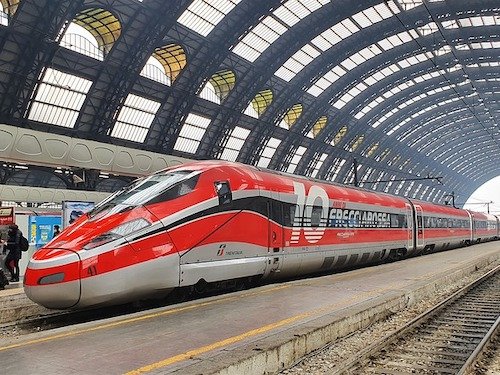 Italy’s national airline Alitalia shut down in October, and the country’s efficient, extremely comfortable, and broadly affordable high-speed rail network is being identified as one of the causes.

While other factors were doubtless involved—competition from cut-rate airlines like Ryanair and Alitalia’s legendary insouciance about passenger satisfaction, for example—Italy’s high-speed rail system (HSR) clearly played a part in the permanent grounding of the 74-year-old airline, says Not Just Bikes in an early December video posted to YouTube.

“Domestic flights made up an unusually high percentage of Alitalia’s flights and Italy’s HSR has seen significant growth in the past decade,” says Not Just Bikes founder and content creator Jason Slaughter, drawing a correlation between the upsurge of train travel in Italy and the airline’s demise.

Certainly, policy headwinds were not in the company’s favour, with countries like France and Austria introducing legislation to “eliminate short-haul flights where trains are available.” Not Just Bikes adds that where HSR does not exist, there are serious plans afoot to bring it in as an alternative to shorter flights.

Citing an October TransEuropa report for Greenpeace, the video adds that “one-third of the top 150 short-haul flights in Europe have train alternatives that are less than six hours in duration, and those alternatives could be improved significantly with more EU investment in high-speed rail and night trains.”

This is certainly a case of “build it and they will come,” Slaughter opines. “When good quality alternatives are available, people will take trains over planes,” he says, citing his own recent experience taking a high-speed train from Verona to Padua and on to Napoli.

While not all of Italy’s trains travel at the plane-competitive speed of 300 kilometers per hour, there are other serious perks: comfort to the point of luxury (at least when compared to sardine-can economy flights); a mere €24 difference between business class and riding with the plebs; and, as one might expect in Italy, “an extensive coffee menu.”

While it took five hours to travel from Padua to Napoli, the time passed pleasantly with lovely scenery, “reasonably” dependable cell service, and great coffee—as compared to the “five hours of hurry up and wait” that now generally characterizes short-haul flights, Slaughter reports.

A further perk: whereas airports are generally located at a purgatorial, and climate-unfriendly, distance from city centres, high-speed rail is almost universally routed through the beating heart of urban life, allowing passengers easy access to most of what they likely came for.

For travel distances of 150 to 800 kilometres, HSR is the best option hands down, Not Just Bikes concludes, and certainly far better than air travel for both passengers and planet.

Massachusetts Energy Efficiency Plan Reaches Out to Residents of Colour