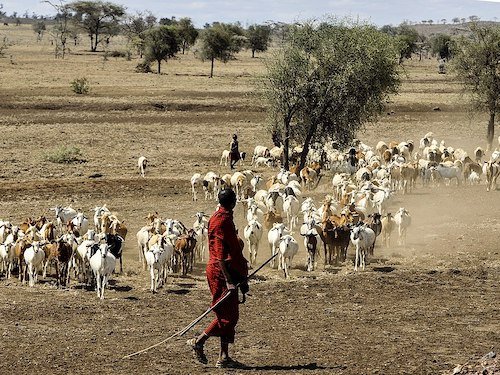 Across East Africa, communities are struggling against the dual realities of flooding and drought as climate change intensifies an Indian Ocean weather pattern, with some of them forced to push back against conservation project priorities they say are more concerned for the well-being of wildlife than for the people struggling to adapt.

To combat the ongoing crises, government agencies are “trying to get food supply to regions where they experience famine because there is no pasture for the animals, the crops are not doing well,” said Joyce Kimutai, a climate scientist and meteorologist based in Nairobi.

“But at the same time, there are regions where they’re experiencing floods, so their crops are being destroyed,” she told CBC News. “The roads, the infrastructure are being damaged, and all that. So it’s a very difficult situation. It’s dire.”

Water temperature differences between the African and Australian coastlines create the Indian Ocean Dipole (IOD) by circulating warm air and moisture between the two continents, explains Carbon Brief. As warm and cool water temperatures shift between the West and East Indian Oceans, the changes in air and humidity produce rainfall patterns that can simultaneously be disproportionately wet on one continent and dry on the other. The resulting weather events’ severity is determined by the amount of temperature difference.

Because it increases the disparity of water temperatures in the IOD, climate change is a main driver of the devastating floods in East African countries like Uganda, South Sudan, and southern Kenya, while the worst drought in decades in northern Kenya pushes many families towards famine.

Floodwaters displaced an estimated 1.7 million in South Sudan and close to 2.5 million people face severe food security, says The Guardian. More than 100,000 are close to famine after the floods decimated food supplies by spreading disease among livestock and making land impossible to cultivate. Entire communities are now relying on nothing but fish and water lilies to survive. People are also suffering from a significant uptick in cases of diarrhea, water-borne diseases like malaria, and snakebites, reports the Washington Post.

Similar circumstances have befallen neighbouring Uganda. There, the government is moving to protect wetlands that, despite offering protection from flooding impacts, are often filled for industrial and urban expansion. Those plans are meeting resistance, and “removing from wetland areas for factories built by wealthy Ugandan, Chinese, and Indian industrialists may prove difficult,” reports Reuters. But many urban residents oppose wetland conservation and want the employment opportunities brought by factories in the converted areas.

“Too many Ugandans fail to see the value of protecting the environment, particularly if that could cost jobs,” Barirega Akankwasah, executive director of the National Environment Management Authority, told Reuters. “Some feel the government cares more about the environment than the people who voted it in.”

While floodwaters flow over the other regions, frustrations similar to those in Uganda are coming to a head among residents of drought-ridden northern Kenya. There, nomadic Maasai herders desperately searching for forage and water are being forced to consider a transition to sedentary farming of drought-resistant crops, says CBC.

But the stricken lands grazed by the Maasai’s cattle juxtapose against those of wealthy ranchers and private land conservancies set up to protect the region’s biodiversity. In some cases, the herders’ grazing needs conflict with plans to establish and protect wildlife corridors.

“We think that land has been fenced off so that we, we the pastoralists, cannot access that [private] land,” said Yoakim Kuraru, a Maasai community leader. “If we had that land, then I think our alternative… source of living would be better.”

The Maasai have been disenfranchised in the region since the early 1900s, and “they still see themselves as the traditional custodians of the land,” CBC adds.

“People are coming up with the notion of conservation as a new colonialism,” said Kuraru. “That is what we are thinking. Wild animals are valued more than us.”