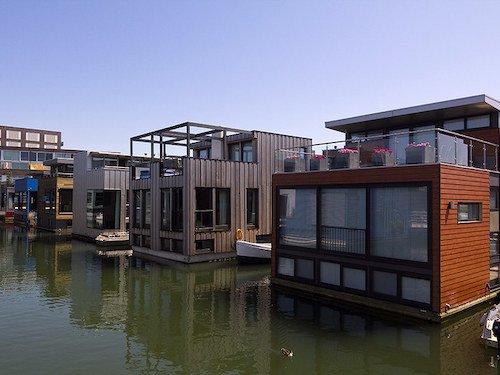 Urban planners around the world grappling with how to respond to sea level rise are finding inspiration in Amsterdam, where residents are combining Old World know-how with 21st-century technology to learn how to live with water.

A third of the Netherlands is below sea level, and two-thirds of the country is flood prone, so there is a widespread and long-running movement amongst the Dutch to subsist companionably with rising tides and storm surge. Case in point is Schoonschip, an Amsterdam suburb of floating homes that could well become an exemplar for waterlogged cities everywhere, writes the Washington Post [$].

The brainchild of 43-year-old Amsterdam citizen Marjan de Blok, who made up for a lack of relevant technical expertise with her ability to rally community support for the project, Schoonschip (“clean ship” in Dutch) is composed of some thirty “arks,” half of which are semi-detached homes, as well as lush floating gardens and a “nearby on-land vegetable patch bursting with kale in the winter and zucchini and tomatoes in the summer.”

Also notable: the neighbourhood’s state-of-the-art smart grid system (designed by a resident), which is fed by 500 solar panels, placed on a third of the community’s roofs, and about 30 heat pumps that draw from the water below. The Post adds that the residents of Schoonschip store all the energy generated in “enormous batteries” located beneath their homes and sell any surplus to each other, as well as to the national grid.

Roughly 150 people make this watery Eden home, including 40 kids who on hot summer days can leap out of their bedroom windows straight into the water.

When howling winds, pounding rain and hail put the rest of Amsterdam on alert in October, the Post writes, life in Schoonschip “carried on mostly as usual,” its smart grid holding steady while its homes “glided up and down their steel foundational poles with the movement of the waters below.”

Such resilience is in the community’s DNA: 12 years in the making, Schoonschip marks the resurrection of a 100-hectare post-industrial wasteland that had effectively sat abandoned for decades after former tenants like colossal fossil Royal Dutch Shell and aircraft manufacturer Fokker decamped in search of cheaper labour.

Emphasizing the ease with which she and her neighbours adapted to living on water (she first grew restive with her landlocked life back in 2007), De Blok told the Post the technology already exists to provide better, safer, lives for the more than 600 million people who live on or near water, and so are very much in the crosshairs of climate change.

Centuries into its ongoing struggle to keep the North Sea and various tributaries of the Rhine at bay via canals and dike and sea gates, the Netherlands is also some 15 years into a program called Room for the River which as its name suggests works to allow strategic flooding in some areas during heavy rains. The program also raises public awareness about water-related problems, and their solutions, leading to an uptake in requests to build on water in both Amsterdam and Rotterdam, 90% of which is below sea level.

Communities like Schoonschip are also increasingly being consulted for projects across the world. “The potential solution has grown in prominence as sea levels are forecast to rise three to five feet this century, and storms are expected to increase in frequency and intensity,” the Post writes.