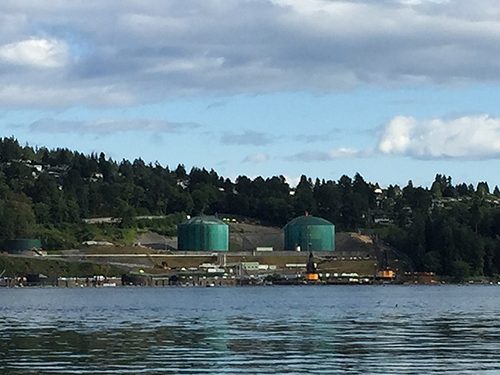 The city of Burnaby, British Columbia is pushing back against after federally-owned Trans Mountain Corporation asked to be excused from fire safety plans for its controversial storage tank farm.

In early December, Trans Mountain filed a request to the Canada Energy Regulator asking for a “constitutional declaration” that would allow it to build without having secured proper fire safety permits from the municipality. Since then, the city has mounted a defence, before filing sworn affidavits accusing Trans Mountain of dodging critically important fire safety requirements, Local Journalism Initiative reporter John Woodside reports.

The central issue is how quickly the fire department could respond to a blaze at the facility. Right now, the Burnaby terminal has 13 storage tanks with capacity for 1.6 million barrels of oil. Trans Mountain’s expansion plans would see the number of storage tanks doubled.

During a surprise inspection of the site last year, a tank fire simulation was controlled within 2½ hours (the target range is four hours). But Burnaby Fire Chief Chris Bowcock said at the time he wasn’t satisfied, and wanted the department to be able to provide a strong response to a fire within 10 minutes. Otherwise, he said, nearby residents would be at risk.

The former National Energy Board reached a similar conclusion before it was replaced by the CER, according to a news report in 2019.

In a sworn affidavit dated December 22, Bowcock told the CER the “key issue is Trans Mountain’s non-compliance with the fire lane standards established by Burnaby’s Fire Services Bylaw at the terminals.”

Those standards would require access routes that are wide enough, can support heavy fire trucks, have turning radii large enough to accommodate a fire truck, and have signs clearly indicating these are fire lanes. The affidavit says the requirements are “mandatory” and must be “applied consistently.”

“As fire chief, I view these requirements as the basic minimum standard for commercial and industrial development projects. For developments with a higher level of fire risk, such as a storage site for hydrocarbons, I would prefer to see more robust fire access standards (wider fire lanes and turning radii),” Bowcock wrote.

Elsewhere in the affidavit, he explained that fire lanes are not just about accessing a site, but also determine where firefighting equipment can be set up and firefighters can be deployed.

“Without sufficient space within the fire lane for these purposes, in the case of a hydrocarbon release and/or fire event, firefighting personnel may be placed in closer proximity to flammable hydrocarbons, increasing risk of harm or loss of life,” he wrote.

“As a fire chief with extensive experience in the context of planning hydrocarbon storage facility firefighting response procedures and pre-plan development, it is my view that there are multiple potential tank fire scenarios within the terminals that would be unextinguishable due to lack of safe firefighting positions.

“With these existing risks in mind, it is very concerning to me that Trans Mountain would be seeking confirmation of fire lane access plans on the basis of a lower standard than the mandatory minimum contained in Burnaby’s Fire Services Bylaw,” he wrote.

In documents filed with the regulator, Trans Mountain said Burnaby is being “unreasonable” by not issuing its building permits.

The Crown corporation said it has “sought to satisfy” Burnaby by providing a fire truck access plan and amending it “repeatedly,” but “some of Burnaby’s requests cannot be implemented at the (Westridge Marine Terminal) and Burnaby Terminal due to site constraints, including grading and pipe location.”

Trans Mountain told Canada’s National Observer it has fire safety plans, including early fire detection and fire suppression systems and training exercises, but did not answer questions related to fire lanes or how the delayed permitting is affecting its construction schedule.

In its application to the regulator, Trans Mountain stressed that the urgency of its request was related to the construction schedule, which is long-delayed and pushing the cost of the project ever higher.

“Further permitting delays for the terminal work will imperil the project construction schedule,” Trans Mountain’s application reads, adding that if it isn’t given relief by January 17, it will not be able to finish the project by its planned in-service date of December 2022.

In an affidavit from last year, Trans Mountain CEO Ian Anderson said each month the company is delayed from bringing the pipeline into service represents about C$100 million in lost revenue. He added that construction delays of “several months” would result in “hundreds of millions in excess capital costs.”

On December 23, on behalf of Burnaby, Ratcliff LLP senior counsel Gregory McDade responded to Trans Mountain’s request to sidestep fire safety requirements. He said the city recognizes Trans Mountain’s terminals have federal approval, and the city cannot reject permits if it would be impossible for TMX to comply. But he contended that this “constitutional issue does not arise here,” calling the fire safety bylaws “reasonable” and “constitutionally valid.”

McDade said the CER is not a municipal regulator, and it “should be cautious” about overruling the very department that would have to respond to any emergency. He added that Trans Mountain has not provided evidence it would be impossible to meet the permitting requirements, and that before the commission accepts such a claim, it should be subjected to detailed scrutiny.

“The standard on constitutional matters is high, and mere added expense or inconvenience is not sufficient,” he wrote.

Megaprojects like TMX are susceptible to cost overruns because slight problems can cascade into larger delays given there are many moving pieces that have to happen in a certain order.

A report published in September by West Coast Environmental Law estimated the cost of TMX is approaching $20 billion, far higher than the price tag of $12.6 billion announced in February 2020. That report also detailed how projects costs have grown substantially from the $5.4 billion first estimated by Texas-based Kinder Morgan Inc. in 2013.

This Local Journalism Initiative post was republished by The Canadian Press on December 31, 2021.

The central issue is how quickly could the fire department respond to a blaze at the facility, & Trans Mountain’s non-compliance with the fire lane standards established by Burnaby’s Fire Services Bylaw at the terminals.

Please contact CER Canada Energy Regulator with your opinion on this – CER has received (and will rule on) this request from Trans Mtn project.
details below: