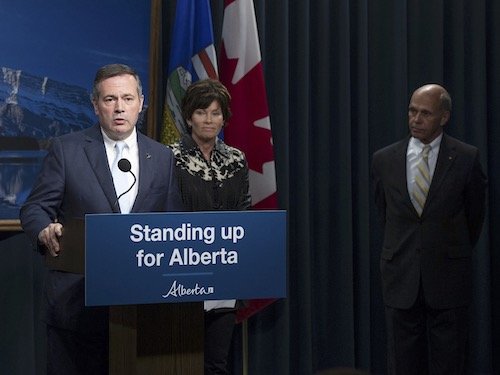 An MLA in Jason Kenney’s United Conservative Party government may soon face a complaint to the Law Society of Alberta, after drastically overstating the dollars from foreign donors that went into anti-tar sands/oil sands campaigns in the province, The Energy Mix has learned.

The challenge to MLA Nicholas Milliken (UCP, Calgary-Currie) comes from former provincial Liberal Party leader David Khan, now a Calgary-based senior staff lawyer with Ecojustice. It centres on Milliken’s Friday tweet that “hundreds of millions of foreign dollars have been used to target the development of our province’s oil and gas industry”.

That figure was apparently Milliken’s take on the long-awaited, long-delayed report from Steve Allan, the UCP loyalist whose commission of inquiry was supposed to look at supposed foreign-funded influence over Alberta’s fossil industry. Unfortunately for Milliken, his numbers didn’t quite match up with Allan’s.

“While [Allan] finds that at least C$1.28 billion flowed into Canadian environmental charities from the United States between 2003 and 2019, only a small portion of that has been directed against the oilsands,” The Canadian Press writes. “Auditors Deloitte Forensic Inc. estimate that money at between $37.5 million and $58.9 million over that period — which averages to $3.5 million a year at most.”

By comparison, the Kenney government’s hapless fossil industry “war room” has received up to $30 million per year in taxpayer funding. Allan found that pro-fossil forces in Alberta took in at least $1.6 million per year, CP says, and Khan noted that the tar sands/oil sands themselves are 70% foreign-owned.

The disconnect in Milliken’s numbers didn’t sit at all well with Khan, who’s vowing to take action if the MLA, an active lawyer on the Law Society rolls, doesn’t dial back the rhetoric.

“This is a lie, and I am going to consider reporting you to the Law Society of Alberta for wilfully promoting misinformation based on an Alberta government public inquiry report that found otherwise, Mr Milliken, Esquire,” Khan tweeted Saturday. “As a member of the bar (& MLA), you have a duty to not lie.”

With that gauntlet formally laid down, “I’m going to put out one more tweet and wait until Monday, asking him to retract and apologize. Normally, we should resolve these things among ourselves,” Khan told The Mix yesterday. If Milliken declines or ignores the request, “there have to be consequences. Lying sounds like a harsh word to use, but I can’t think of anything less direct that encompasses the actions they’ve taken.”

Milliken did not return a call and email requesting comment. An Allan spokesperson sent a prepared statement indicating that the commissioner would have no further comment on any aspect of the report.

A distillation of Deloitte’s work for the Allan report, obtained by The Mix, shows Canadian environmental charities receiving $8.1 billion from all sources over the study period, including $925 million from foreign sources. Non-Canadian environmental charities raised another $353 million for initiatives related to Canada, and Allan got his total of $1.28 billion by combining the two.

But Khan and others note that the totals include nearly $450 million that went to Ducks Unlimited, a non-profit dedicated to buying and preserving wetlands—and currently led by Larry Kaumeyer, a former principal secretary and interim chief of staff to Kenney.

While Khan is focusing his attention on Milliken at the moment, he pointed to similar tweets from Kenney, Energy Minister Sonya Savage, the United Conservative Party caucus, and other UCP representatives, in what could be interpreted as a coordinated online campaign.

“It’s been really shocking to me that a government would push out false claims, lies essentially, based on a report they commissioned which came to different conclusions,” he said. “Rather than respect the commissioner and the report they paid for and commissioned, which was Mr. Kenney’s idea, they’ve decided to push out the same narrative they’ve been flogging like a dead horse for years.”

Despite Allan’s findings to the contrary, “they’ve made no changes to their conspiracy theory about this vast network of evil environmentalists”—even though one of the principal sources of that theory, Vancouver blogger Vivian Krause, has since walked much of it back.

“What’s been most disturbing is that they’re using the figure that our Canadian environmental organizations have received in U.S. funding and conflating that with the very tiny amount of money that went to the anti-oilsands campaign which was never hidden, was never a conspiracy,” Khan added. “These people in a position of power are getting away with lying about something fundamental to our province and our future, and lying about something they spent so much time trying to prove, that the commissioner essentially disproved.”

Khan said he was concerned about that activity as a member of the legal profession, and acknowledged he might be more attuned to it because of his own time as a provincial party leader.

“I know how the sausage is made, I guess, and I was involved for three years at the highest level of provincial politics,” he told The Mix. “So I know all the players, I know how they operate.” But even so, “the confluence of it all was absolutely shocking to me,” particularly the apparent coordination across multiple Twitter accounts.

“Essentially, it’s misinformation from the highest levels of the Alberta government, the party in power, and the premier and leaders,” he said. “So it’s incredibly disturbing.”