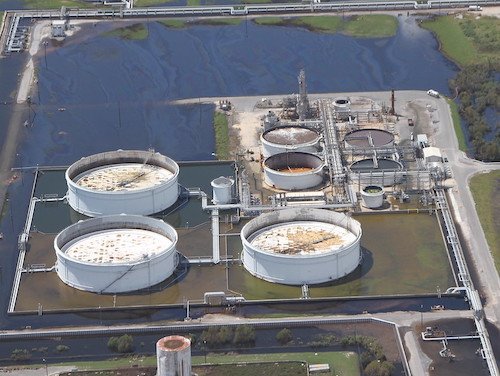 In the very crosshairs of the climate crisis, and still in the grip of a self-interested fossil sector, Louisiana is in desperate need of a just transition, with roughly 20 oil refineries shut down since a 1980s production peak and 25,000 oil workers losing their jobs since 2014.

The most recent blow causing a “slow death” of Louisiana’s oil industry, writes Grist, is the closure of the Phillips 66 oil refinery in Belle Chasse, after US$1.3 billion in damages brought on by Hurricane Ida.

At least 900 people worked at the refinery, and it generated roughly 15% of the tax revenues for the parish in which it is located.

The lost income is being felt. Plaquemines Parish President Kirk Lepine told a local FOX news station there would be “a trickle-down effect” into everything from government services to grocery stores, with the resulting budget cuts already affecting ambulance service.

David Dismukes, executive director of the Center for Energy Studies at Louisiana State University, told Grist the energy transition is here, and Big Oil knows it and will act accordingly, in its own self-interest. “People and industries are making, not just hundreds of millions, but billion-dollar decisions based on the belief that this transition is here,” he said.

“The transition has become very problematic and challenging for Louisiana,” added Dismukes, a 30-year student of the fossil industry and its challenges. “We’ve seen these corporations pencil these closures out 15 ways to Sunday to figure out a way to make it economical just for themselves.”

And Louisiana officials have allowed the pencilling, and the erasures, to happen. In addition to job and revenue losses, their hands-off approach means abandoned fossil infrastructure will be more likely to sit “idle and unremediated,” neglect that will come back to haunt local communities when the next big hurricane hurtles ashore.

but far from recognizing the urgent need for a just transition, and taking steps to ensure one, state officials are continuing to actively court the fossil dollar, Grist says.

“If you look at our state’s plans for industry and jobs in the coming years, it’s still all about petrochemicals, carbon capture, and fossil fuels,” said Anne Rolfes, director of the Louisiana Bucket Brigade. Case in point: Louisiana Governor John Bel Edwards’ recent announcement of a US$10 billion partnership with Venture Global LNG to open a new plant in the state, with the promise of a job generator that will produce at least 200 positions with wages in excess of US$120,000 per year.

“With access to Louisiana’s Quality Jobs incentive program, the firm will qualify for taxpayer-funded cash rebates for well-paying jobs,” local media reports. After that, the state’s Industrial Tax Exemption program “will provide an 80% property tax abatement for the facility for five years, after which Venture Global can receive an 80% property tax abatement for another five years if the state determines the project is meeting its proposed job metrics.”

While the promise of jobs must be alluring, fossil jobs have no future, said Drew Caputo, vice president of litigation at Earthjustice. “The scientists are not just saying clearly—but waving their arms frantically—that the time to begin to move seriously to winding down fossil fuel development is now,” he told Grist.