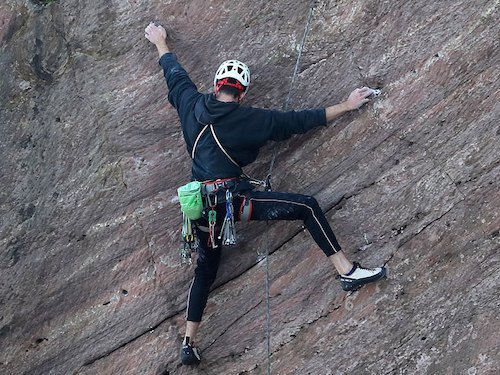 Citing his sport’s outsized climate impact, as well as Canada’s history of oppressing Indigenous peoples, a competitive climber has resigned from the national team.

Victoria-based Tosh Sherkat, 23, told CBC News he arrived at his decision when he found there was no way to reconcile his participation in international climbing competitions with two deeply-held beliefs: that every person must do their part to fight the climate crisis, and that he could not represent a country with such a record, past and present, of mistreating Indigenous peoples.

Sherkat said almost everyone in his generation is now thinking about the climate crisis and their individual contribution to it. “It was kind of an obvious thing to look at myself and go, ‘What is it that I’m doing as a routine that produces the most amount of carbon?’”

As he explains in an op-ed for the indoor climbing magazine, Gripped, the answer had to be his sport, especially its international dimension.

“Between travelling to and from competitions, travelling to training multiple times per week, food waste and food consumption at competitions and at home (especially the higher consumption of meat products while I am in a training cycle), the yearly routine of vying for a National Team spot is my most consistent and greatest producer of carbon emissions,” he writes.

Examining his climbing goals, Sherkat asks, “how much do they matter if people are drowning, crops are failing, and the strategy to protect what little is left is just built off the strategy that got us here?”

Sherkat said he also had trouble representing Canada on the international stage because of its historical and ongoing abuse of Indigenous peoples. With more than 30 Indigenous communities in Canada still lacking clean drinking water, he asks, “when Climbing Escalade Canada (CEC, the national sport climbing program) takes money from the government of Canada and feeds it back into the athletes, is that the same money that could be going towards providing clean drinking water to those communities?”

Sherkat concludes that he cannot in good conscience continue to represent “a settler state that is actively oppressing Indigenous people.”

While Sherkat has bowed out of international competition, CBC writes, he will continue to compete domestically. But only at events that are “within a set driving distance.”

CEC director Andrew Wilson told CBC that while he was obviously disappointed to see Sherkat leave the program, he respected the decision. “It takes a lot of courage to stand up for what you believe in,” Wilson said.