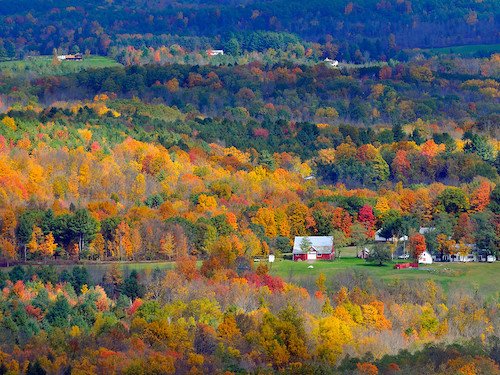 Nearly 70% of New York voters have backed an amendment to the state’s climate law to grant all residents the right “to clean air and water and a healthful environment,” potentially laying the groundwork for lawsuits against fossil fuel polluters and developers.

New York’s climate law sets ambitious goals to transition away from fossil fuels and “create a new, electrified economy that stops adding to climate change by 2050,” reports The New York Times. It commits the state to several climate targets, including increasing the share of energy generated from renewable sources from 30% to 70% by 2030 and shifting its power sector to net-zero emissions by 2040.

The climate law has since influenced several state decisions to bar new fossil fuel projects, such as the fracked gas Williams Northeast Supply Enhancement pipeline in 2020 and two new gas-powered facilities this past October, a move that drew praise from the Institute for Energy Economics and Financial Analysis. One month later, the state passed the amendment granting the right to a “healthful environment,”  setting the stage, Gerrard said, for citizens to sue the government or other entities more easily for things like polluting a river or hindering the state’s legally binding clean-energy targets.

One caveat, he added, is that the constitutional weight of the amendment is still unclear and it may take several years for the courts to flesh out exactly what the provision means in concrete terms. A handful of other states have similar provisions, but only three—Pennsylvania, Montana, and Hawaii—have had state court rulings to enforce them.

The Pennsylvania Supreme Court ruling in Robinson Township v. Commonwealth, for instance, turned on a state provision granting all residents “a right to clean air, pure water, and to the preservation of the natural, scenic, historic, and aesthetic values of the environment.” The court ruled against legislation that would have barred local governments from banning fracking in certain zoning areas, finding that the “right to an environment of quality is an obligation on the government’s behalf to refrain from unduly infringing upon or violating the right.” The ruling indicates that such provisions require state governments to proactively protect citizens’ environmental rights through actions like carrying out environmental impact assessments for new projects and denying permits for those found to be too harmful.

The Pennsylvania ruling did not set any precedent that would be binding for New York. But climate advocates are optimistic the new amendment will support stronger action to fulfill the state’s emission reduction targets, writes Inside Climate News.

“The state is looking as if it’s going to come out with an aggressive plan,” said Conor Bambrick, Environmental Advocates NY’s director of climate policy. “It really bodes well for the future.