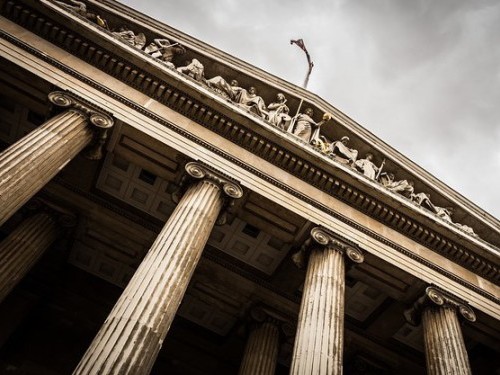 Presenting the model legislation vote as an “opportunity to push back against woke financial institutions that are colluding against American energy producers,” Jason Isaac, director of the Koch-funded Texas Public Policy Foundation, emailed his ALEC allies the morning of the vote, urging them to pass the measures. The email was obtained by the Center for Media and Democracy and was first reported on by CMD investigative journalist Alex Kotch.

The model legislation responds to those strategies, Isaac said in the email, by setting forth “a strategy in which states use their collective economic purchasing power to counter the rise of politically motivated and discriminatory investing practices.’”

One piece of legislation, “Resolution Opposing Securities and Exchange Commission and White House Mandates on Climate-Related Financial Matters,” encourages states to litigate against rules from federal financial regulators around climate risk and disclosure.

The other, the Energy Discrimination Elimination Act, directs state treasurers and comptrollers to maintain a list of firms boycotting fossil fuels, and requires all businesses with more than 10 employees that receive federal contracts to verify that they aren’t a part of any boycott campaigns.

“The bill and its backers claim that fossil fuel divestment will hurt workers and state pension funds, yet it ignores the growing U.S. renewable energy industry and its lucrative stocks,” reports CMD. With recent estimates from the U.S. Department of Energy that 80% of electricity will be produced from renewables by 2050, ALEC staff suggested that “lawmakers frame the bill as protecting the economic interests of their states.”

By September, measures similar to those laid out in the proposed Energy Discrimination Elimination Act had already been enacted as Texas law, following passage of Texas Senate Bill 13.

Isaac said the language in the model legislation was “carefully crafted to uphold First Amendment free speech principles and avoid restricting companies’ ability to adopt political stances on energy,” reports CMD. But some experts point out that the bill is modelled after anti-BDS (boycott, divestment, and sanctions) legislation that ALEC has passed in 33 states in response to other policy issues, some of which has been struck down as unconstitutional.

“We have recently seen a concerted legislative attack on the right to boycott,” Nicholas Robinson, senior legal adviser at the International Center for Nonprofit Law, told CMD. “It should concern everyone who cares about free speech when a state government punishes those who engage in a boycott.”