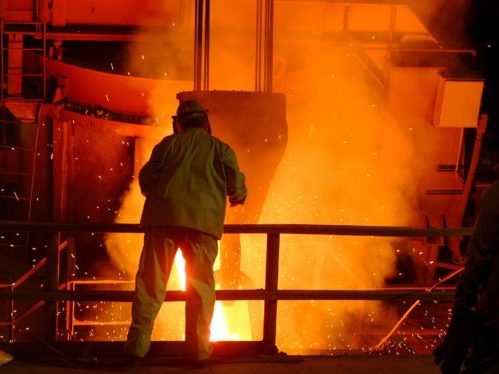 The steel industry is at a crossroads, with government policies like carbon pricing designed to combat climate change hitting manufacturers’ bottom lines and international pledges likely to seek further concessions from companies that burn fossil fuels.

And the CEO of Algoma Steel in Sault Ste. Marie, Ontario is hoping the company’s costly (and federally-backed) investment to make “green steel” will help to insulate it from the kinds of sector-wide downturns that previously threw it into bankruptcies, The Canadian Press reports.

“I would never say never, but we are certainly doing everything in our power to certainly minimize, if not eliminate, that risk,” says chief executive Michael McQuade, who has plans to reduce the company’s carbon emissions by about 70%.

That kind of activity is already reverberating through the coal industry, with CBC pointing to British Columbia coal’s vulnerability as the industry decarbonizes, and the Institute for Energy Economics and Financial Analysis (IEEFA) reporting that global steel production may already have reached peak emissions.

B.C. Bets on a Declining Industry

“Ninety-five per cent of B.C. coal is metallurgical as opposed to thermal. Thermal coal is used to make steam that produces electricity. Metallurgical coal, or coking coal, is mined to produce the carbon used in steelmaking and is shipped mostly to Asian countries for that purpose,” CBC explains.

“But just because B.C. doesn’t produce and export thermal coal—which is nearly universally maligned for its high emissions—it doesn’t mean the province is not contributing to a massive amount of carbon emissions,” the national broadcaster adds. “In developing countries such as China and India, where infrastructure like railways, roads, bridges, and buildings is being built en masse, steel is crucial to continued growth.”

With annual sales approaching C$4 billion, CBC says coal is B.C.’s most valuable mined product, and the province accounts for nearly half of Canada’s coal production. But steel also accounts for an estimated 7% of global carbon pollution, according to researchers at Net Zero Steel.

CBC says even a fast transition to green steel will take time, with the first two facilities in Sweden now a few years away from commercial production. But “it’s quite feasible that starting, say, five years from now, all new steel plants are using some version of this technology,” said Net Zero Steel’s Chris Bataille, an IPCC lead author and adjunct professor at Simon Fraser University. “It’s not even a matter of how much coal is there.… Eventually, if we’re serious about decarbonizing the steel industry, there won’t be any demand for coal.”

But while that technology shift is just beginning, IEEFA sees some prospect that demand for steel—and therefore for metallurgical coal and the emissions it produces—will begin falling off sooner. China produced 57% of the world’s crude steel last year, and “it’s possible that Chinese steel production—and hence China’s steel sector carbon emissions—peaked in 2020,” write analysts Simon Nicholas and Soroush Basirat.

The article cites national policy requiring steelmakers to keep their total production this year below 2020’s, troubles in the country’s real estate sector, and an attempt to shift steel production to electric arc furnaces as factors that weigh against coking coal and in favour of lower emissions.

CP says Canada’s steel industry is currently in a position of strength as the economy recovers from the COVID-19 downturn and a period of punishing tariffs imposed by the Trump administration in the United States.

The $15-billion industry produces about 13 million tonnes of primary steel, steel pipe, and tube products in more than 30 facilities in five provinces.

Profits are soaring as production destined primarily for sale in Canada and the U.S. fetches elevated prices during a moment of strong demand from an uptick in oil drilling and infrastructure spending. That has not always been the case, as rivals have previously flooded the market when transportation costs were lower, sending the commodity price of the metal lower.

Algoma is taking advantage of that situation to pursue initiatives it says will position it as a low-cost producer in the future.

Just three months after again becoming a public company and three years after emerging from bankruptcy, the largest employer in Sault Ste. Marie, announced a $703-million plan to go electric by converting its greenhouse- gas-spewing blast furnace to an electric arc furnace.

The move, supported by $420 million from the federal government and US$306 million from its merger with Legato, would reduce the 120-year-old company’s carbon emissions by about 70%.

McQuade said the electric arc furnace is a proven technology that would allow Algoma to adjust output to market demand, something that is not easily achievable with traditional blast furnaces that heat iron ore with coking coal at high temperatures. Its annual capacity would also increase more than 50%, to 3.7 million tonnes from its current capacity of 2.4 to 2.5 million tonnes.

A big driver for this conversion is planned increases in the federal carbon price to spur a reduction in Canada’s greenhouse gas emissions. The price per tonne is set to rise from $40 today to $170 in 2030.

Still, the move to electric arc furnaces isn’t without concern in a border city where generations of workers have been employed at the plant.

Suspicions have surfaced among local workers that the new technology will further cut employment, which has dipped to 2,500 because of automation. In Canada, direct employment in the steel sector has declined by more than half since the 1970s, and from 35,000 in 1990 to about 22,000 today.

“It’s possible that there will be very little impact if they do it properly. The problem was that they didn’t consult with us, and so there’s just a lot of fear among workers, like am I going to lose my job,” said Meg Gingrich, assistant to United Steelworkers Canada national director Ken Neumann.

McQuade won’t say how many positions will ultimately be shed, but he notes hundreds of employees are eligible for retirement. He said the company has been transparent about why the conversion is needed and noted there would be a hybrid phase in which the existing and new technologies will run together. It may take until 2029 for a full transition to occur.

Canada’s second-largest steelmaker isn’t alone as the industry adjusts to what McQuade describes as a new paradigm.

The federal government is also tapping into an $8-billion program supporting industrial decarbonization by investing $400 million in ArcelorMittal Dofasco, which is pursuing a $1.7-billion project to phase out coal-fired steelmaking at its facilities.

Canada’s largest producer of flat-rolled steel and the largest private sector employer in Hamilton said the project would reduce CO2 emissions by up to three million tonnes per year by 2030.

Canada’s steelmakers say they are already among the greenest in the world, but the industry is striving to become net zero by 2050 when global demand is expected to soar by more than a third from current levels.

“When you have 16 million tonnes of CO2 emissions per year and $170 carbon price coming at you, we know we need to address it,” said Catherine Cobden, president and CEO of the Canadian Steel Producers Association.

She said the two conversion projects are part of a journey to net zero that is not going to be easy.

“I think for us it’s almost existential. We’re living in a country that has got significant climate objectives and strong regulatory and carbon pricing mechanisms to back those objectives.”

Cobden said achieving net zero is going to require a lot of investment and additional policy support from government. That includes procurement requirements that support the purchase of low-carbon steel and stimulate the transformation even further, she said.

At the recent COP 26 climate summit in Glasgow, Canada signed on to the Industrial Deep Decarbonization Initiative, whereby countries would require green factors to be considered for the purchase of materials, including steel.

The United States and the European Union also recently announced a commitment to negotiate the world’s first carbon-based sectoral arrangement on steel and aluminum trade by 2024. The deal, which would be open to other interested countries, would restrict access to their markets for dirty steel and limit access to countries—namely China—that dump steel and contribute to worldwide oversupply.

A carbon-based arrangement is expected to drive investment in green steel production, while the new US$1-trillion bipartisan infrastructure deal in the United States holds promise of increased demand for years to come, provided there are no limitations on cross-border trade, said Cobden.

“Certainly as the market becomes more and more competitive, there might be a premium offered to who could ever produce the cleanest at the highest quality,” she told CP.

The main body of this report was first published by The Canadian Press on November 21, 2021.

Climate Extremes Can Produce ‘Vicarious Trauma’, Even From a Distance