B.C. Faces $1B in Damage After U.S. Refuses to Reinforce Cross-Border Dike 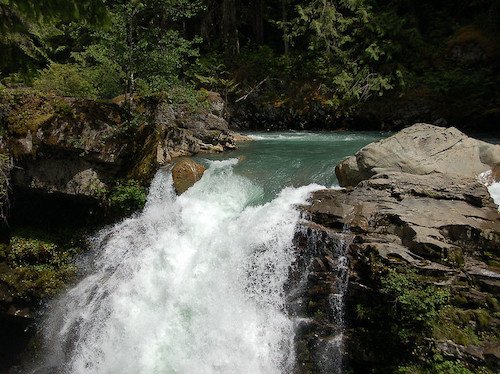 A longstanding cross-border failure to redress the vexed problem of the Nooksack River’s occasional but devastating flooding has left Fraser Valley farmers and homeowners with estimated damages nearing C$1 billion.

There’s more than enough blame to go around in the most recent chapter in the story of Washington State’s Nooksack River and its periodic threat to the fertile, low-lying lands of British Columbia’s Fraser Valley, writes the Globe and Mail.

That the river’s floodwaters managed to wreak such havoc in places like Abbotsford in mid-November is in part a result of a multi-jurisdictional failure to maintain key dike systems already in place north of the border.

Washington State arguably shoulders some of the blame for refusing B.C. ’s repeated pleas to build a $29-million levee extension that would have held the Nooksack within its banks at the town of Everson, some 9.5 kilometres from the Canadian border.

Building that extension could have saved the region more than $500 million in damage to infrastructure and agriculture, writes the Globe, citing a flood mitigation report produced for the city of Abbotsford in 2020.

Extending the levee at Everson would cost “less than a tenth” of flood prevention alternatives north of the 49th parallel, which would involve not only raising dikes but also “tunnelling a runoff channel through a mountain,” adds the Globe.

But, as the report noted, that calculation looked “only at Canada-side damages,” not at the potential costs to Washington State and its citizens. The Abbotsford report acknowledged that extending the levee could cause more flooding downstream, where the Nooksack threads through both valuable farmland and Indigenous territory, so that “additional analysis work is needed on the U.S. side to provide the overall benefit-cost ratio.”

Any flood control measures on the Nooksack would also have to account for the fact that the river is inhabited by chinook salmon, currently under federal legal protection in the U.S. as a threatened species.

“It really isn’t simply an economic analysis for us,” Dave Radabaugh, program coordinator for Washington’s National Flood Insurance Program, told the Globe. “We’re still looking at it and sorting through the options.”

One option the B.C. government has been reluctant to pursue, writes the Globe, is getting the International Joint Commission (IJC) involved. Once commissioned to do so by federal governments, the U.S.-Canada body can make non-binding recommendations for solutions to “thorny” cross-border water issues, “including payment from one country to another for construction or compensation.”

But B.C. has had cold feet about using the IJC ever since it recommended canceling a coal mine on the Flathead River, said Ralph Pentland, Canada’s former federal director of water planning and management. But Pentland described the province’s continuing unwillingness to invoke the IJC as “a big mistake—for the province and [for its] people.”