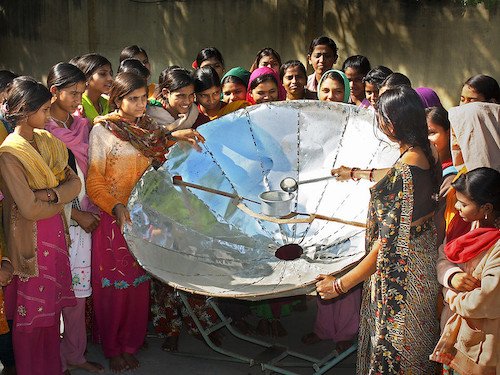 With three billion people around the world still forced to cook their food over open fires, a U.S. organization is promoting an old solar technology to answer this challenge.

“We’ve seen incredible progress on the recognition of cooking as a topic in addressing climate change,” said Caitlyn Hughes, executive director of Solar Cookers International (SCI), during a presentation during the COP 26 climate summit last month. Not only does cooking over an open fire pose significant health impacts for predominantly women and children, but the average cooking stove burns one tonne of wood each year.

SCI’s mission is to promote solar cookers, and it seized the opportunity in Glasgow to encourage national governments to include cooking in their National Determined Contributions (NDCs) under the Paris Agreement. Currently, out of 194 NDCs, only 66 mention cooking or stoves, including 23 that cite the need to use non-emitting fuels, but only Somalia specifically mentions the value of solar cookers.

Solar Cookers International was recently awarded the Keeling Curve Prize—named after the famous graph tracking CO2 accumulation in the Earth’s atmosphere—for its work in the Kakuma refugee camp in northern Kenya. Occupants of the camp receive sufficient food, but not sufficient wood to cook that food, said SCI science director Alan Bigelow. The result is that families have to trade their food for more wood.

Using a solar cooker in an environment with an abundance of sunshine offers a number of benefits, he added, including less interaction with other people during a time of global pandemic. People can also use solar cookers to pasteurize water to make it safe for drinking, or to dry and preserve food.

There are more than four million solar cookers around the world, SCI estimates, delivering direct benefit to 14 million people. They’ll also reduce carbon dioxide emissions by 30 million tonnes over the lifetime of the units, the organization says.

SCI has spearheaded the development of performance standards that allow the rating of solar cookers, called Standard Cooking Power, which Bigelow predicts will increase credibility for this simple technology and encourage greater investment by governments. The organization has 1,800 pages of information in 46 languages on its website, with country-by-country analyses, which Hughes said is very important as momentum for solar cooker adoption grows.