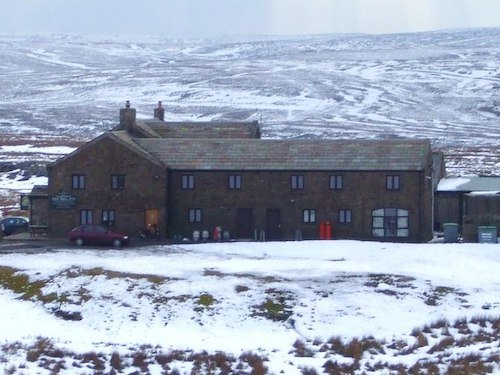 While last weekend’s Storm Arwen brought misery to many in the United Kingdom—and tragedy to the loved ones of three men who died in its wake—it also generated kind camaraderie, courtesy of three-foot snow drifts which kept some 60 strangers trapped at a northern Yorkshire inn for three days.

An Oasis tribute band called Noasis was playing at the Tan Hill Inn Friday night when the wind started to howl and the snow began to bucket down, writes the New York Times.

Except for one person needing medical attention who was evacuated by a local rescue group, and one anxious couple delivered home to their young children via off-road vehicle, most guests ended up in an impromptu and extended sleepover till Monday morning, when a snow plow finally freed them.

General manager Nicola Townsend told the Times that many of her guests became quite emotional upon saying goodbye “because we’ve had such a good time meeting new friends, getting to know new people.”

A photo accompanying the Times report shows the Inn’s lounge chock-a-block with people, complete strangers just hours before, snoozing peaceably together on the floor and on sofas, bundled under borrowed blankets and kept warm by a roaring fire.

And then there was the food, available in plenty as the inn had stocked up for the winter.

Roast dinners and an on-the-house buffet, “with lots of picky bits,” according to Townsend, kept people warm.

And kindness ran both ways. “Patrons helped wash dishes and took up a collection for the staff,” writes the Times.