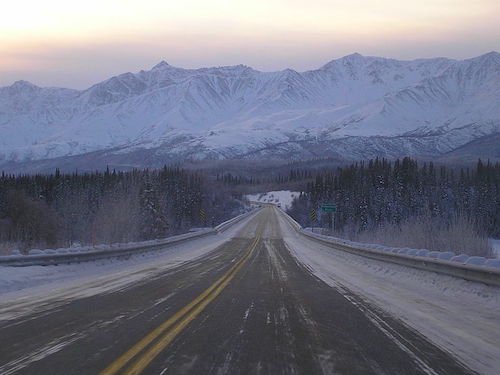 As global heating causes permafrost to melt, and slump, around the world, two Canadian scientists on opposite ends of the country are working on an early warning system to help communities gauge when the risk is imminent.

Permafrost slumps occur when the once-permanently frozen layer of soil begins to thaw. If the layer contains a lot of ice, as it does in Canada, writes the Toronto Star, the ice melts and the ground can no longer support the weight on top of it.

“When that happens, it can cause roads to sag or buckle. It can even cause sinkholes to open up in the middle of a roadway,” the news story states.

Anxious to protect northern Yukon communities for which the Alaska Highway is a lifeline, Fabrice Calmels, Yukon University research chair in permafrost and geoscience, is trying to find a way “to give governments an early warning of the menace long before the ground begins to heave beneath their feet,” the Star says.

That’s particularly useful given that once a slump happens “there is often a chain reaction—more permafrost is exposed to the air, accelerating the thawing, and the slumping becomes a runaway process.”

And the pace is picking up. This past summer, thanks in part to a two-week spell of 30°C+ temperatures in the region, the permafrost slump galloped “a whopping 18 metres” closer to the highway, a considerable uptick in a speed which has averaged 13.8 metres per year for the past five years.

“If it continues at its current average pace—which is not a given—it will cross paths with the highway in two or three years,” writes the Star. So the territory’s Department of Highways and Public Works “is already looking at ways to mitigate the problem.”

As policy-makers debate options that range from building detours, to artificially cooling the permafrost, to digging down to buttress the highway from beneath, Calmels has installed a network of sensors along the route to keep a watchful eye on key permafrost vital signs like ground and air temperatures, soil moisture, and precipitation.

The sensors, similar to the ones that Calmels’ mentor Michel Allard, professor emeritus at Laval University, has installed at three airports in Nunavik, are the first stage of a larger early warning system on the drawing boards.

The system would provide two levels of warning, Calmels told the Star. The first would use small shifts and temperature changes in the permafrost as warning that a slump was imminent. The second, involving “a massive movement or the loss of a sensor,” would immediately signal that a slump had occurred, giving authorities time to shut down affected infrastructure.