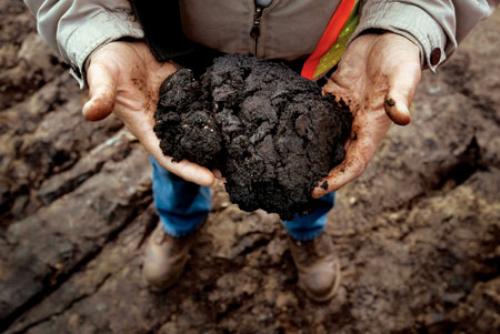 Profound damage to ecosystem and public health and wrenching cultural loss are the legacy of 54 years of tar sands/oil sands mining for the First Nations communities with primordial roots along the Athabasca River, concludes a special report by Inside Climate News.

Where boreal forest and wetlands once stood, home to myriad creatures and communities, there now sprawls a New York City-sized ooze of mines within which nothing grows, and their associated waste ponds which contain toxins inimical to life, Inside Climate tells its primarily U.S.-based audience.

And companies like Suncor and ExxonMobil continue to chew through the land, with giant machines “digging up nearly 500 Olympic swimming pools-worth of earth every day.”

“It’s just the most completely ludicrous approach to industrial and energy development that is possible, given everything we know about the impact on ecosystems, the impact on climate,” said Dale Marshall, national program manager with Environmental Defence.

Take the tar sands/oil sands’ carbon footprint: citing 2018 data, Inside Climate reports that the industry consumed 30% of all the natural gas burned in Canada to extract bitumen from sand.

It is also a water hog, taking nearly 219.5 billion litres/58 billion gallons of water from surrounding waterways in 2019 alone. “When all that water comes out the other end, it is so heavily laced with hydrocarbons, naphthenic acids, and carcinogenic heavy metals that it cannot be released where it came from,” writes Inside Climate.

So the water is kept in tailings ponds, on the theory that the toxins will settle out from the water in a few years. In reality, such settling “will take decades or even centuries to separate naturally,” so the ponds have grown exponentially to cover more than 160 square kilometres.

“Every day, they swell with millions of gallons of new toxic waste,” Inside Climate adds.

And where there are tailing ponds, there are problems with leakage. While industry continues to protest otherwise, multiple studies have shown that toxins like mercury, lead, and nickel are leaking into groundwater. Research is under way aimed at confirming the link between groundwater contamination and the sudden eruption of rare diseases like bile duct cancer in communities like Fort Chipewyan, which sits at the confluence of the Peace and Athabasca rivers, 90 kilometres north of the nearest tar sands/oil sands development.

Yet Jim Boucher, former chief of the Fort McKay First Nation, told Inside Climate that with the fur trade in its final death throes, his community had no choice but to take what Sun Oil (now Suncor) offered when the company opened its first project on their lands in 1967.

After becoming chief in 1986, Boucher formed the Fort McKay Group of Companies to work with the fossil industry, writes Inside Climate. Over the next few decades he oversaw partnerships that would eventually net hundreds of millions of dollars for the community.

But the First Nation was shown little respect along the way. Boucher recalls how when the oil major took over a culturally significant hunting and gathering ground, “there was no discussion, no consultation.”

While he acknowledges the economic good that has come to his community in the form of employment and royalties, Boucher knows that what Inside Climate describes as “a devil’s bargain” has cost his people dearly. When his grandfather’s hunting cabin was swallowed up by one of the mines, he built a new one for his father—and that cabin is now surrounded by new mines.

Boucher’s cousin Jean L’Hommecourt is a traditional land use researcher and environment coordinator for the Fort McKay Nation. She says the vast ecological impact on the land is a challenge to her community’s very existence, even as the fossil industry provides it with jobs and revenue.

“The basis of all our Indigenous culture is on the land,” L’Hommecourt told Inside Climate.