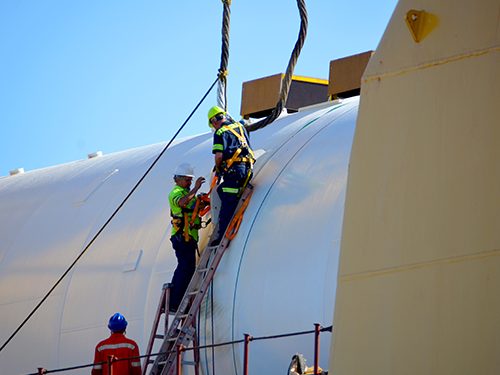 British Columbia’s only confirmed liquefied natural gas (LNG) terminal may be on its way to becoming a “financial albatross”, according to a new analysis released Wednesday, even as a developer continues to tout a second LNG project in Howe Sound, just north of Vancouver.

The LNG Canada megaproject was approved with lavish provincial subsidies in 2018, producing a massive emissions gap in the province’s climate plan. Now under construction, it’s the intended terminus for the Coastal GasLink pipeline that has become a trigger for militarized raids on unceded Indigenous land and a railway blockade in the weeks leading up to COVID-19 lockdowns in 2020.

Now, a report by the Institute for Energy Economics and Financial Analysis (IEEFA) says the first phase of LNG Canada “could be the last liquefied natural gas project built in British Columbia” given changing market conditions, project delays, rising costs, and policy shifts.

“Over the last three years, market shifts and policy changes have tested LNG Canada’s long-term economic viability,” said lead author Omar Mawji, IEEFA’s energy finance Canada analyst. “This project could become a financial albatross for its sponsor investors, and it stands as a warning to other natural gas producers” involved with natural gas fracking projects in the Montney Basin in northeastern B.C.

That isn’t a good look for Phase 2 of the LNG Canada venture, or for other LNG projects that B.C. Premier John Horgan and his Liberal Party predecessor, Christy Clark, have been desperately promoting for years.

“If the project sponsors assessed the energy landscape today instead of 2018, they would likely have been far more cautious in deciding whether to move forward with Phase 1,” Mawji said in an IEEFA release. “The conditions do not bode well for other LNG projects in Canada.”

IEEFA released its analysis just a day after Woodfibre LNG announced it had signed a C$2.5-billion deal to build a terminal on Howe Sound, the Squamish Chief reports. The contractor, Houston-based McDermott International, recently emerged from bankruptcy protection in the United States after “facing enormous cost overruns at construction projects for two LNG plants,” the Houston Chronicle recounted. Woodfibre said it chose McDermott based on its experience with low-emission facilities—a feature the company is touting based on its access to electricity from large hydro dams in B.C.

“One of the things they bring to the table is a philosophy of low-emissions LNG construction, and that’s our philosophy as well,” said Woodfibre spokesperson Rebecca Scott. “So when you’re working with the engineers who are going to design the facility, you want to make sure you’re aligned on what you want it to be like.”