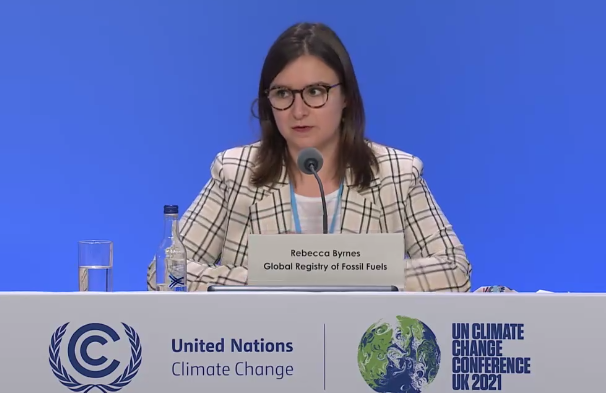 A prototype of the world’s first comprehensive database on fossil fuel production and reserves was unveiled at a sidebar session at COP 26 in Glasgow, even as world leaders avoided decisive commitments to end fossil subsidies and urgently phase out coal.

The Global Registry of Fossil Fuels is being developed by the U.K.-based Carbon Tracker Initiative “to determine how much coal, oil, and gas is being dug out of the ground, and if it is compatible with the carbon budget of 1.5°C,” explained session moderator Rebecca Byrnes.

The database already contains information on 2,000 coal mines and 5,000 oil and gas fields, with data on their size, ownership, and current and projected carbon emissions, said Ted Nace, executive director of Global Energy Monitor. Activists, academics, and business groups are already using the database as “the first step in a virtuous circle of transparency,” he added.

“It is a living database for responsible stakeholder needs that will address gaps and uncertainties in the public record,” said Robb Schuwerk, executive director of Carbon Tracker’s North American office. The registry will reconcile a wide range of emissions estimates from reputable sources, which he noted can be 18% different for oil sites and 150% off for anthracite coal mines. It will calculate the level of CO2 from any project, and quantify how much any government earns from the production of fossil fuels.

“We still don’t know the total amount of fossil fuel reserves and assets in the world,” said Carbon Tracker Executive Chair Mark Campanale. “Without this information, we believe it is very difficult to determine how to phase out the exploitation of fossil fuels in a way that complies with the Paris Agreement.”

He estimated that US$1 trillion of investment is currently funding the expansion oil and gas production alone.

Panelists agreed that comprehensive data on fossil fuels must be freely available in the public domain, since the information is too important to be left in the lands of commercial players. But they deflected audience questions on the competition with companies that currently sell information.

“It will show which countries have given permits for CO2 sources, so we can match rhetoric with reality,” said Campanale.