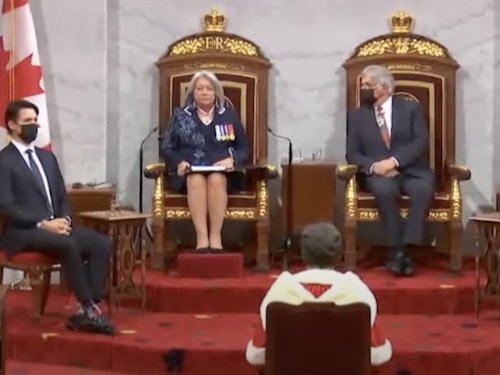 Governor General Mary May Simon issued what the Globe and Mail called a “stark warning about the decades ahead” Tuesday, in a Speech from the Throne that led off with language about reconciliation with Indigenous peoples, the “profound pain” and unmarked graves of the residential school system, and the immediate urgency of the climate crisis.

In her introductory remarks, Simon called for “action on climate change,” asserting that “our Earth is in danger. From a warming Arctic to the increasing devastation of natural disasters, our land and our people need help. We must move talk into action and adapt where we must. We cannot afford to wait.”

The main body of the speech, traditionally written by the Prime Minister’s Office, addressed the “immeasurable challenges” facing people in British Columbia, the recovery from the COVID-19 pandemic, and the government’s plans for a more resilient economy, before settling into a section on bolder climate action. It reiterated the Liberal government’s campaign promises on innovation and green jobs, clean manufacturing and supply chains, a transition in which “no worker or region will be left behind”, and a commitment to tap into global capital and investment.

To “go further, faster” in response to the climate crisis, the speech commits the government to:

• Protect lands and oceans to address biodiversity loss, with initiatives that include stronger partnerships with Indigenous peoples and respect for traditional knowledge;

• Create a Canada Water Agency to “safeguard that vital resource and support our farmers”;

“This decade is still young,” Simon concluded. “With compassion, courage, and determination, we have the power to make it better than how it started. But that can only happen by standing together.”

Prime Minister Justin Trudeau covered much the same ground in his response to the Throne Speech.

“Today’s Speech from the Throne recognized the overlapping threats facing the country in health, climate, the economy, and in the state of relationships with Indigenous Peoples, but failed to present a coherent emergency response to these interconnected crises,” Climate Action Network-Canada said in a release. “Climate change is a threat amplifier; the way forward requires a whole-of-government approach that prioritizes resilience and solidarity.”

“The need for urgent action to address the climate crisis was front and centre in the 2021 Speech from the Throne,” said Environmental Defence Canada Executive Director Tim Gray. “Now we need to see that same urgency in plans for implementation—concrete and swift measures to reduce carbon emissions, end plastic pollution, and remove toxic chemicals from our daily lives.”

While most of the media analysis leading up the speech focused on the pandemic, the economy, and affordability as the key concerns the country faces, CBC Parliamentary reporter Aaron Wherry singled out the climate emergency as the issue that could determine the government’s impact and legacy.

“The 44th Parliament could be about a lot of things, as most parliaments are,” Wherry wrote. “COVID-19 is still not done with us and the aftershocks will be felt for some time to come.”

But “this Parliament might be judged by how it met the other crisis unfolding before our eyes—by what it does to deal with the impacts of climate change that are already unavoidable, and to reduce the greenhouse gas emissions that would make things even worse in the future.”

Wherry recalled that climate change was already “at the centre of the agenda” when then-governor general Julie Payette delivered the December, 2019 Throne Speech, just weeks before reports of COVID-19 began circulating.

“A clear majority of Canadians voted for ambitious climate action now. And that is what the Government will deliver,” Payette said at the time. “From forest fires and floods, to ocean pollution and coastal erosion, Canadians are living the impact of climate change every day. The science is clear, and it has been for decades.” And “Canada’s children and grandchildren will judge this generation by its action—or inaction—on the defining challenge of the time.”

That speech pledged a 2050 deadline to achieve net-zero emissions, a price on carbon in every part of the country, and new initiatives on energy-efficient buildings, zero-emission vehicles, “clean, affordable power”, and climate change adaptation as major elements of the government’s legislative program.