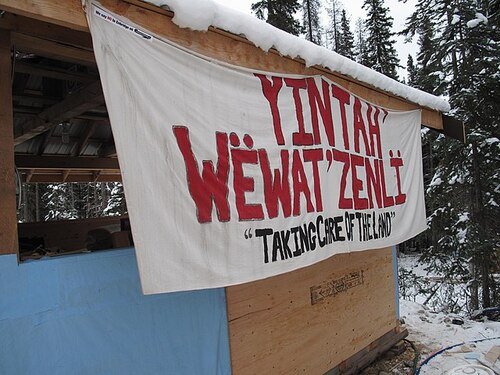 Two journalists have been released from custody, but the Coastal GasLink pipeline company is demanding that at least two land defenders “prove” their Indigenous status, following heavily militarized RCMP raids on a blockade aimed at stopping construction of a fracked gas pipeline through unceded Wet’suwet’en territory.

The raids last Friday came days after members of the Gidimt’en Clan issued an eviction order, cut off access to a key Coastal GasLink work site, and gave construction crews eight hours to “peacefully evacuate” the area before the main road into the Lhudis Bin territory was closed. About 30 people were arrested in the two raids.

The clan members had set up the Coyote Camp September 25 on the work site south of Houston, British Columbia, “halting plans to drill under the Wedzin Kwa (Morice River),” CBC said last week. Spokesperson Sleydo’ (Molly Wickham) had called the river “the major concern”, adding that enforcement of the eviction notice was “the next step” to protect the Wet’suwet’en sacred headwaters, salmon spawning river, and source of clean drinking water.

Now CGL, a subsidiary of Calgary-based pipeliner TC Energy, is “asking Sleydo’ to provide documentation to ‘prove’ she is Wet’suwet’en, and is seeking conditions that would bar her from returning to her home on Wet’suwet’en Yintah where her, her husband Cody Merriman (Haida nation, who was also arrested), and her three children live,” the Gidimt’en Checkpoint said in a release Monday. “CGL is also challenging [Hereditary] Chief Woos’s daughter Jocelyn Alec’s status as a Wet’suwet’en person.”

In an email, TC Energy told VICE World News that “under no circumstances” would its subsidiary ask anyone to prove their Indigenous status. “But the company then confirmed its lawyers asked ‘relevant contemnors’, a person found guilty of contempt, to confirm to the courts that they are Wet’suwet’en,” Vice writes.

“This was to ensure access to allow the relevant contemnors to practice their Indigenous rights while under the court’s conditions,” the TC Energy said.

“Coastal GasLink’s proposed conditions of release are punitive, unreasonable and, in targeting Sleydo’ and Jocelyn, completely racist and sexist,” said Gidimt’en Checkpoint spokesperson Jen Wickham. “Allowing a private corporation to determine two Indigenous womens’ identities and allowing this corporation to deny our inherent rights to be Wet’suwet’en on our territory is a very dangerous precedent.”

“It would be my guess they are trying to weaken a claim to being on the land, and any restrictions resulting from the (legal) proceedings, including conditions, could be challenged on that basis,” he said. “My guess is that they are nervous and trying to throw anything at the wall and hope it sticks, which to me shows a little bit of desperation.”

Kim TallBear, an associate professor in the University of Alberta’s Faculty of Native Studies, told VICE the pipeline company has no business querying anyone’s Indigenous status unless they’re thinking of hiring them.

“Who is CGL to ask? If they were offering a job to somebody who was Indigenous and there was a preference for that, but this is not their place to ask,” she told VICE. “I don’t even know why anyone is entertaining this demand or request… Settlers will stick their noses into this stuff wherever they can, but it’s not their business.”

On Monday, a judge in Prince George, B.C. released award-winning photojournalist Amber Bracken and independent filmmaker Michael Toledano. Their arrests along with the land defenders Friday had sparked an outcry for press freedom and loud complaints to Public Safety Minister Marco Mendicino about the RCMP’s seemingly routine disregard for those rights.

Bracken was at the Coyote Camp on assignment with The Narwhal, and her lawyer, David Sutherland, said she was “was well-known as a member of the media to both Coastal GasLink and the police,” CBC reported Monday.

“Amber Bracken told me she was labelled as press and identified herself as press,” Sutherland said. “So there’s no breach of the injunction at all.”

“This was a punitive arrest. A punitive incarceration. I was put in a holding cell for four days for filming Indigenous people being removed from their land at gunpoint,” Toledano told CBC. “Canadians should know that journalists in this country can be arrested and incarcerated if they’re telling a story the RCMP don’t like.”

Chief Supt. Warren Brown for RCMP’s North District “E” Division “said the police will never arrest anybody for being a journalist, but they will arrest people for actively participating in the protest,” CBC writes.

On Monday, Narwhal managing editor and investigative ace Mike De Souza reported the RCMP was tracking both Bracken and Toledano through an active law enforcement database. “Police also seized the professional equipment and possessions of both journalists,” De Souza wrote, a move that “prevented The Narwhal from obtaining and publishing Bracken’s photos showing what police did” during Friday’s arrests.

“We are very concerned to learn that the RCMP was tracking Amber’s activity in an active investigations database,” said Narwhal Editor-in-Chief Emma Gilchrist. “Amber has always conducted herself as a professional journalist and there is no excuse for the RCMP to track the activities of journalists.”

“It’s one of those issues that makes me wonder what other information is being collected and what are they planning to do with that,” added Canadian Association of Journalists President Brent Jolly. “Are they trying to use this to demonize Amber and Michael, for example, to tar and feather them for future reference so that they can be painted as activists or delinquents or something else? It just makes me wonder what other motives are there.”

Sierra Club BC Climate Justice Campaigner Anjali Appadurai said the B.C. government of Premier John Horgan made a “specific policy choice” to “prioritize the enforcement of Coastal GasLink’s injunction over a true application of the 1997 Delgamuukw decision [pdf] that granted Wet’suwet’en Peoples rights and title to their lands. They made another specific policy choice to deploy RCMP and provincial resources to remove Indigenous land defenders during an acutely devastating extreme weather event.”

After the “devastating string of climate change impacts” the province has sustained in recent months, Appadurai added, “it’s been incredibly demoralizing to watch precious resources deployed not to provide urgent relief to flood victims, but rather to attack land defenders and protect the interests of a pipeline company on unceded Indigenous lands.”

Response to the RCMP raid also placed prominently in climate groups’ responses to Tuesday’s Speech from the Throne in Ottawa.

“The federal government’s words on both reconciliation and climate change stand in stark contrast to the RCMP’s ongoing violence against Indigenous land defenders, as the colonial state attempts to force through a fossil fuel infrastructure project on unceded Wet’suwet’en territory,” Climate Action Network-Canada said in a release.

“While the Speech from the Throne made nods to both reconciliation and fighting the climate crisis, the government continues to support oil and gas projects which violate Indigenous rights,” including the Coastal Gas Link and Trans Mountain pipelines, added Julia Levin, senior climate and energy program manager at Environmental Defence Canada.

“We’re also compelled to note the huge levels of public spending the government continues to provide to climate culprits, including for false solutions like carbon capture and fossil hydrogen.”