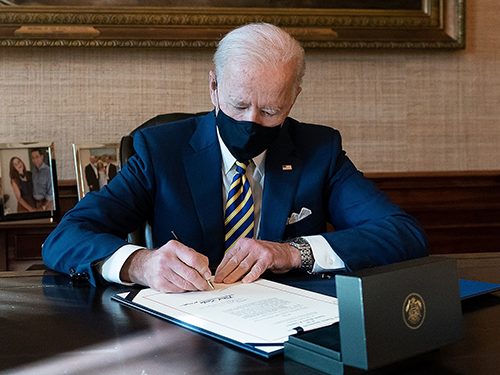 By a narrow 220-213 vote, the U.S. House of Representatives has adopted a US$555-billion climate package, the biggest in the country’s history. But the legislation will have to navigate major obstacles among “moderate” Senate Democrats to have a chance of being passed into law.

The climate program was the largest single part of a sweeping, $2.2-trillion spending bill that passed a House vote Friday. It includes $320 billion in tax measures to drive consumer demand and manufacturing for electric vehicles, heat pumps, solar panels, wind turbines, and other elements of a decarbonization agenda, the New York Times reports.

The climate package also contains measures “that could significantly curb the fossil fuel emissions that have been heating the atmosphere, fueling deadly and record-breaking wildfires, floods, heat waves, and drought,” the Times says.

• Bans new oil and gas leases off the U.S. Atlantic and Pacific coasts, and off the eastern Gulf of Mexico;

• Sets a fee on methane leaks from oil and gas wells;

• Authorizes offshore wind farms in the Atlantic and the eastern Gulf;

• Brings together “a suite of programs designed to help low-income and minority communities that are disproportionately harmed by environmental problems,” the Times says. That list includes $15 billion for clean energy projects, and $2.83 billion for tree planting in poor neighbourhoods where summer temperatures can run up to 5.5°C hotter than more privileged (hence leafier) areas.

“Once enacted, the new legislation could prevent emissions of about one billion tons of carbon dioxide by 2030,” the news story adds, citing analysis by the New York City-based Rhodium Group. “That’s the equivalent of taking roughly all the cars in the United States off the road for one year. But it would bring the country only about halfway to [U.S. President Joe] Biden’s goal.”

Bloomberg Green looks back on the compromises the bill had to go through to satisfy the various factions in the House Democratic caucus.

But even so, “one gigaton and up is transformational,” said Robbie Orvis, senior director of energy policy design at San Francisco-based Energy Innovation. “It’s much more than anything that’s ever been done by the U.S. Congress. And it really helps set the stage for continuing those emissions reductions through other actions by 2030 and beyond.”

“It looks like the White House’s claims that the Build Back Better Framework will deliver ‘well over a gigaton’ of emission reductions by 2030 is very legit,” added Princeton University energy modeller Jesse Jenkins. “Probably understated, actually.”

Biden laid out the challenge and the opportunity behind the climate package in a speech to the COP 26 climate summit earlier this month. “The science is clear,” he told participants, and “we only have a brief window left before us to raise our ambitions and to meet the task that’s rapidly narrowing.”

But “within the growing catastrophe, I believe there’s an incredible opportunity. Not just for the United States, but for all of us. We’re standing at an inflection point in world history. We have the ability to invest in ourselves and build an equitable clean energy future.”

“This bill makes it happen for us in terms of preserving the planet,” agreed House Speaker Nancy Pelosi (D-CA). “It’s a health issue: clean air, clean water for our children. It’s a jobs issue: making America pre-eminent in good-paying green jobs. It’s also a national security issue, because [of] competition for habitat and resources resulting from drought, and all of the challenge of natural disasters springing from the climate crisis. And it is a moral issue, if you believe as I do that this is god’s creation and we have a moral obligation to be good stewards.”

Earthjustice President Abigail Dillen told the Times the climate emergency is no longer a distant threat. “It’s here now,” she said. “And we need bold action from our government to deploy the clean technologies and natural solutions that will carry every community, including those that have too long borne the brunt of pollution and climate catastrophe, into a safe and vibrant future.”

Fossil lobbyist Erik Milito, president of the National Ocean Industries Association, which represents offshore drilling companies, said the bill was “a gift to higher-emitting producers like Russia and China that wield their energy resources as a geopolitical tool.”

“There is much in the new infrastructure law that climate advocates can celebrate. It provides $39 billion to modernize public transit, $66 billion for Amtrak [railway] maintenance, and $65 billion for desperately-needed power grid upgrades,” Bloomberg Green writes.

“But the law is full of provisions that are as favourable to fossil fuels as their carbon-free alternatives. A modernized power grid that still carries fossil fuel energy doesn’t in and of itself reduce the nation’s carbon footprint. The plan includes $5 billion for new school buses, although the program would allow half to go toward buses that run on natural gas or propane as opposed to being all electric.”

That makes the first of the two bills no more than a downpayment on the country’s climate commitments, reducing emissions by only about 100 million tonnes, Bloomberg says. The $555 billion climate component in the new legislation delivers about 10 times more and represents the country’s biggest climate investment ever, far eclipsing the $80 billion in the Obama-era economic stimulus package adopted in 2009.

The Times and Bloomberg have more on the politics behind the infrastructure package that passed the House last week, while the Washington Post says the official costing attached to the bill may not take the economic costs of climate change into account. Utility Dive says that second bill could make renewable energy more accessible to low-income households, while Grist points to a $240-billion allocation for environmental justice projects. The New York Times profiles an historically Black neighbourhood in New Orleans that sees renewed hope of removing an expressway that physically divided the community decades ago, while Stand.earth sees “unprecedented opportunity” in the new legislation for zero-emissions shipping.

The Senate debate on the bill is expected to take until the end of the year, and it will play out in a moment of political panic over rising fossil energy prices, with a gallon of gasoline running as high as $6.00 in California. Over the last couple of weeks, Congressional Democrats have been pushing Biden to free up oil supplies, thereby driving down prices, by banning exports and releasing stock from the U.S. Strategic Petroleum Reserve. Biden is calling for a Federal Trade Commission investigation of “anti-consumer” pricing practices by fossil companies, even as he celebrates the rise of U.S. electric vehicle manufacturing.