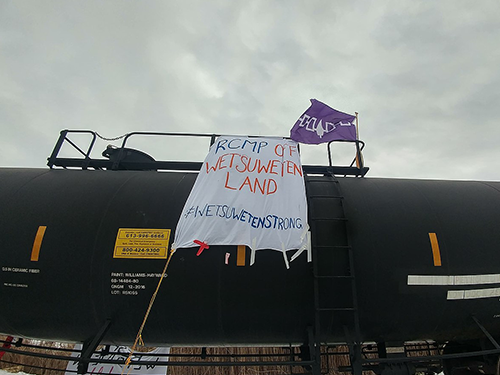 Heavily-armed RCMP agents stormed an Indigenous blockade Friday and arrested 32 people, including Gidimt’en Clan spokesperson Sleydo’ (Molly Wickham) and two journalists, in another escalation of the dispute over construction of the Coastal GasLink fracked gas pipeline through unceded Wet’suwet’en territory.

The raid came days after members of the Gidimt’en Clan issued an eviction order, cut off access to a key pipeline work site, and gave construction crews eight hours to “peacefully evacuate” the area before the main road into the Lhudis Bin territory was closed at 1 PM.

The clan members had set up the Coyote Camp September 25 on the CGL work site south of Houston, B.C., “halting plans to drill under the Wedzin Kwa (Morice River),” CBC said last week. Sleydo’ had called the river “the major concern”, adding that enforcement of the eviction notice was “the next step” to protect the Wet’suwet’en sacred headwaters, salmon spawning river, and source of clean drinking water.

But on Friday, RCMP broke down the door of the camp and “arrested multiple occupants—including two who police say identified themselves as journalists,” CBC writes.

The Gidimt’en Checkpoint delivered a more complete and vivid account of the raid in a release Saturday.

“Police were deployed in military garb, armed with assault weapons and dog teams, and enforced a media and communications blackout at the site,” the release stated. “First, a cabin was breached with an axe and dog unit. Moments later, a separate cabin built on Coastal GasLink’s proposed drill pad site was breached with a chainsaw and snipers aimed at the door. RCMP did not have warrants required to enter either dwelling. After raiding Coyote Camp, police swept through Gidimt’en Checkpoint and made four more arrests, including Sleydo’s partner, Cody Merriman (Haida nation), legal observers, and accredited journalists who were there to witness the events.”

The release gave a total count of 32 arrested.

“The Wet’suwet’en people, under the governance of their hereditary chiefs, are standing in the way of the largest fracking project in Canadian history,” Sleydo’ said in a statement prior to her arrest. “Our medicines, our berries, our food, the animals, our water, our culture, our homes are all here since time immemorial. We will never abandon our children to live in a world with no clean water. We uphold our ancestral responsibilities. There will be no pipelines on Wet’suwet’en territory.”

The release said “solidarity actions” had taken place in Burnaby, B.C., Toronto, Winnipeg, Vancouver, Montreal, and Victoria, along with a rail blockade in New Hazelton, B.C., with more expected over the weekend. The Checkpoint’s Twitter account has photos of rallies in Peterborough and Guelph, as well as video of the arrests Friday.

In a searing email to supporters, Dogwood Communications Director Kai Nagata said the “mask is off” on the B.C. government’s priorities in a climate emergency.

“While rescue teams searched for bodies, and soldiers filled sandbags in Abbotsford, police dressed up like soldiers spent the week serving as mercenaries for the Coastal GasLink pipeline,” he wrote. “A squad of at least 50 heavily-armed RCMP officers, flown in from detachments around the province, headed north to arrest Gitxsan and Wet’suwet’en people on their own land.”

The “diversion of public safety resources, during a provincial state of emergency, had to have been authorized by cabinet ministers,” Nagata added. “The B.C. government is going all-in to build LNG Canada, a fracked gas megaproject that would ensure tomorrow’s climate disasters are even more deadly and destructive,” and was brought to life by more than $5 billion in provincial subsidies.

The Canadian Association of Journalists identified two of those arrested as Amber Bracken, an award-winning reporter for The Narwhal, and documentary filmmaker Michael Toledano. Their treatment “marks just the latest in a long string of illegal RCMP actions against journalists,” Narwhal Editor-in-Chief Emma Gilchrist wrote in a Sunday afternoon email. “Let’s be clear: journalists play an essential role in bearing witness in a democracy and have a charter right to report from within injunction zones,” and “the RCMP needs to be held accountable for their repeated violations of the rights of Canadian journalists.”

Dogwood is urging supporters to call a B.C. cabinet minister and “hold them responsible for “using a climate disaster to force through a pipeline” while 17,000 people are evacuated from their homes. The Narwhal is looking for letters to federal Public Safety Minister Marco Mendicino, calling on him to “exercise his oversight responsibility of the RCMP to correct these serious violations of press freedoms.”

Today’s Flooded B.C. Farmland was Once a Lake that Sustained Indigenous Economies