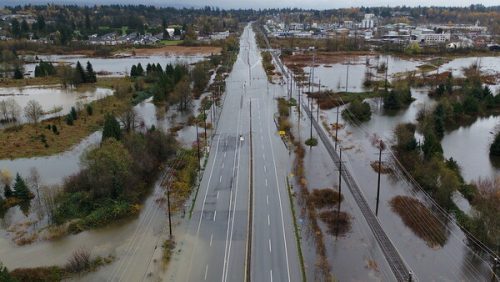 As rescue workers continue to search for the missing and communities struggle to cope with broken supply chains, damaged and endangered infrastructure, and lost homes and livelihoods in the wake of British Columbia’s catastrophic rainstorm, experts warn of many more such “disaster cascades” to come in an overheating world.

On November 17, B.C. Premier John Horgan declared a province-wide state of emergency to help those struggling to clear and repair the vital web of highways and railroads that suffered supply chain-shattering damage during last weekend’s rainstorm.

In effect for at least the next 14 days, the state of emergency brings in travel restrictions designed to keep roads clear for repair crews, as well as for medical and emergency personnel, reports CBC News.

With the entire province heavily dependent on goods carried north and east by truck and rail, swift repair of these arteries is imperative. Because the Trans Canada (Highway 1), the Coquihalla (Highway 5), Highway 99, and the Crowsnest (Highway 3) are all shut down, the Lower Mainland—including the vital Port of Vancouver—remains severed from the rest of Canada, excepting detours up the north coast by ferry, or down and back across the United States border.

The impacts have been nearly immediate and severe, especially for small communities in the B.C. Interior. Located 185 kilometres northeast of Vancouver on Highway 3, the village of Tulameen (population 400) was, at last report, still without power in dropping temperatures and was dependent on helicopters to deliver food and other essentials.

In the wake of panic buying sprees that cleared grocery shelves from Chilliwack to Prince George, David Earle, president of the B.C. Trucking Association, urged people not to hoard, a message later echoed by Horgan.

Running from Hope to Princeton and on through the southern Okanagan and the Kootenays to the Alberta border, Highway 3 (the Crowsnest) is considered most likely to open first. In a statement, Transportation and Infrastructure Minister Rob Fleming said the road could reopen by the end of the weekend.

So far, there is no timeline for when the other highways might reopen, reports CBC.

Meanwhile, the 7,000 residents of Merritt remain displaced from their homes under an evacuation order issued Monday morning when the municipality’s wastewater treatment plant was taken out by flood waters. As CBC reported, the order advised that the plant “is inundated and non-operational and will be for an indefinite period of time.” A few hours later, an alert declared the city’s drinking water “undrinkable,” even if it was boiled, and urged residents not to consume water from their taps.

In an update on the impacts of the precautionary closure of the Trans Mountain pipeline and its deeply contentious expansion project, Reuters noted that closing off the oil spigot will necessitate either storing the pipeline’s 300,000 barrels of oil a day, or rerouting it either through Enbridge’s mainline, or south by rail through the United States.

It “does seem like supply chains are so tight these days that when something happens, panic and scrambling becomes the plan,” John Zahary, CEO of Altex Energy, which owns rail terminals in Alberta and Saskatchewan, told Reuters.

Having likewise stoppered part of its natural gas pipeline that runs through the Coquihalla River Valley—a move that will reduce the amount of gas flowing to Vancouver—Enbridge is scrambling to store or redirect gas flows, writes the Financial Post.

Commodities exporters are rushing to avoid getting caught up in the supply chain pile-up of other goods like grain and fertilizer. With the Port of Vancouver and two critical east-west rail lines (one owned by CP and the other by CN) currently down, this is proving both difficult and expensive.

“Vancouver’s port moves C$550 million (US$437 million) worth of cargo a day, ranging from automobiles and consumer goods to commodities,” notes Reuters.

In comments at an investor conference, CP Chief Marketing Officer, John Brooks described the railroad that runs from the port to points east as “our lifeblood,” Reuters says. “Just about all commodities to some extent flow through that,” he added.

And one grain trader told Reuters that delays “will stretch for as much as one month given the backlog of shipments,” a backlog that was already well-entrenched thanks to pandemic-related ills. And buyers will charge for delayed deliveries.

Both Teck Resources, the copper and coal titan, and Canpotex, which extracts potash for export, have diverted their cargoes to other ferry terminals, in some cases rerouting as far away as Saint John, New Brunswick.

As shockwaves reverberate through national and global supply chains, people back in the inundated communities are struggling with the loss of homes and livelihoods—and loved ones.

At the news conference announcing the state of emergency, Horgan said authorities “expect to confirm even more fatalities in the coming days.” One woman from the Lower Mainland who was caught in a mudslide on a highway near Lillooet was confirmed dead Tuesday night.

Illustrating the extent to which the atmospheric river which swept across southwestern B.C. this past weekend will continue to ravage families and communities for some time is the loss of the Velt family farm near Merritt. In a video interview with the CBC, a visibly-grieving Pam and Paul Velt recall watching their entire farm, including their riverbank home, swept away in mere moments by raging floodwaters.

Thousands of animals are known to have died. Many rescued animals will likely have to be euthanized , and still more are trapped without fresh feed or water.

In a rare piece of good news, valiant efforts by city workers, farmers, and volunteers to build a sandbag dam around a vital pump station have so far saved the City of Abbotsford from further life-threatening inundation, CBC says.

The Barrowtown pump station is all that stands between the vast Fraser River and the area of Sumas Prairie, which on Tuesday night, stood in peril of being returned to its original state as Sumas Lake.

“We’re not out of this yet,” Abbotsford Mayor Henry Braun warned residents, emphasizing that safety depends upon dry skies. Braun later estimated it will cost his city $1 billion to rebuild from the flood.

A small advance guard of Canadian Armed Forces personnel are now on the ground ahead of a larger contingent expected to provide assistance throughout the stricken region, helping to secure communities and support people.

Meanwhile, politicians at all levels have pledged to work together to help B.C. recover from what Abbotsford Conservative MP and former environment critic Ed Fast described as a “a huge, multi-billion-dollar challenge.”

That a rainstorm—however large and intense—could have destroyed so much and so quickly, comes as no surprise to Glenn McGillivray, managing director of the Institute for Catastrophic Loss Reduction.

In an op-ed for the Globe and Mail, McGillivray describes how cataclysmically “uncharacteristic” events like the “multiple, simultaneous” wildfires that terrorized a number of B.C. towns this summer, and November’s torrential rains still threatening hammered communities from Abbotsford to Golden, are likely to become the norm.

“It’s challenging enough to deal with one event in one place at one time. But these are exactly the kinds of greater challenges a warmer climate that is sometimes drier, sometimes wetter, will bring,” McGillivray writes.

Noting that the communities currently struggling to keep their heads above water are the same ones that baked this summer in unprecedented heat, he warns that smaller cities are especially at risk of being “consumed” by the climate crisis because they lack the necessary capacity, such as a sufficient number of first responders and the budgets required for this level of disaster preparedness. And this urgently needs to change, he added.

“What we are seeing in places like B.C. these days is not ‘normal.’ It’s just another way station on the washed-out road to the Anthropocene,” warns McGillivray.

Armel Castellan, a warning preparedness meteorologist with Environment Canada, echoed the need for B.C. policy-makers to reckon with climate change model projections which show “how atmospheric rivers will become more potent and perhaps longer lasting than what we even saw this weekend.”

And then there is the testimony of eyewitnesses to the impacts of one such river, this time round.

Abbotsford resident Nora Weber, who watched her street swallowed up by water, told the CBC, “I think what we’re dealing with is complications of global warming.”

While we were being drenched and flooded by the atmospheric river, a consequence of climate warming, Trans Mountain spent Saturday to Monday loading an oil tanker in Burnaby.
Do our governments not understand the connection? This would be ironic if it were not a travesty.

The crude oil tanker, Pacific Sky, was at the Westridge dock Nov 13-15. Its draught increased from 8 m to 11.6 m. It is now on its way to California.