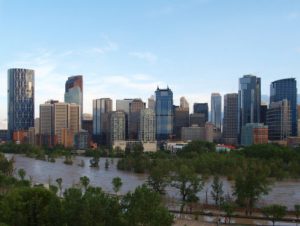 On a decisive 13-2 vote, Calgary’s city council has followed through on plans to declare a climate emergency, just days after e-commerce behemoth Amazon Web Services cited easy access to renewable energy as a factor in its decision to bring a multi-billion-dollar cloud computing hub to the community.

In October, newly-elected mayor Jyoti Gondek said a climate emergency declaration would be her first order of business after taking office. It happened Monday after a two-hour debate, the Calgary Herald reports, a mere two years after Edmonton took the same step.

The motion also calls for an update to the city’s environmental plan to set a 2050 deadline for net-zero emissions.

Gondek said the declaration matches up with the position Calgary oil and gas companies are already taking, the Herald says. “It is a matter of making sure we understand the reality of the table stakes that are declaring a climate emergency, so we can actually attract capital and talent here,” she said.

Controversial councillor Sean Chu, one of the two who voted against the resolution, warned against sending a negative message to the fossil industry. “Fossil fuels have, if anything, made human life on this planet better, not worse. They have blessed humans with the capability of living successfully in a harsh natural climate like ours,” he said. “Declaring a climate emergency should not take priority over the economic emergency and jobs emergency in Calgary.” [To confirm the obvious: Yes, the week after the searing loss and damage discussions at COP 26, we’re using embedded links here to talk back to Chu’s statement. Click through for more…Ed.)

But Coun. Jasmine Mian rejected the notion that the emergency declaration was an attack on the fossil sector. “When facing a collective action problem like climate change, the greatest threat is thinking that everyone else will take care of it,” she said.

Just days before the vote—while council was preoccupied with Chu’s swearing-in and whether to limit his participation in city committees—Amazon Web Services (AWS) said it would open its second Canadian cloud computing server hub in late 2023, triggering “billions of dollars of investments in the coming years,” The Canadian Press reports.

“The company would not say how many Amazon employees will work directly at the new server cluster, but says the project will sustain an estimated annual average of 409 direct jobs by 2037 through construction, facility maintenance, electricity needs, and other support services.” CP says. “It also declined to provide the estimated up-front investment costs for the Calgary hub, but says it plans to invest C$4.3 billion by 2037 in the region through construction, utility costs, and buying goods and services from local businesses.”

AWS Canada Country Manager Eric Gales cited Calgary’s connections to national and infrastructure and its access to renewable energy as factors that guided the company’s site selection. “We do have a commitment in Canada that all of our AWS, and Amazon, infrastructure will be powered by renewable power by 2025, and we’re on track to meet that goal,” he told CP.