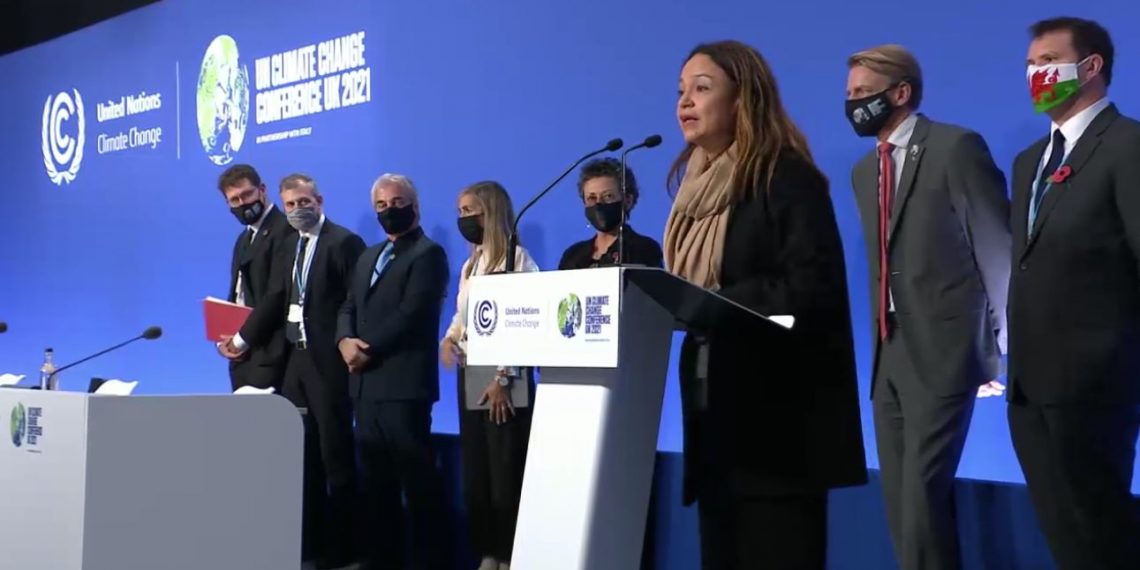 Beyond Oil and Gas Alliance, with Costa Rica's Environment Minister Andrea Meza at the podium. Screen shot from UNFCCC livestream.

A new alliance of countries whose members are pledged to reduce their oil and gas production in line with keeping the planet’s heating below 1.5°C was launched at the COP 26 summit in Glasgow yesterday.

Initial membership of the Beyond Oil and Gas Alliance (BOGA) was small—12 governments—but it immediately exposed the yawning gulf between what nations promise by way of reductions in greenhouse gases and what they actually intend to do.

Founding countries, Costa Rica and Denmark, were joined by France, Greenland, Ireland, Quebec, Sweden, and Wales. California, Portugal, and New Zealand are associate members, which means they share the organization’s aims but have not yet aligned their policies to gain full membership. Italy joined as a “friend” and Scotland was in “active talks” to join.

To join BOGA as a “core” member, a jurisdiction must commit to end new oil and gas exploration permits, organizers said. Associates agree to demonstrate progress toward an oil and gas phaseout, through measures like curtailing fossil fuel subsidies.

Notable by their absence were the world’s biggest oil producers, meaning simply that by not joining they signalled their intention to produce more oil and gas than is compatible than saving the world from dangerous climate change.

This is seen as an embarrassment for the United Kingdom, the host of the climate conference in Glasgow. That’s particularly the case since Wales, one of the member countries of the “United Kingdom”, has joined, and Scotland is likely to follow suit. Sharing the U.K.’s shame are Canada, which has declined to participate while the Quebec government signs on, and the United States, which has California signing up.

BOGA cast itself as an alliance of governments “determined to set an end date for their oil and gas exploration and extraction and curtail new licencing or undertake other significant measures that contribute to the joint goal of aligning oil and gas production with the objectives of the Paris Agreement.”

In Glasgow Thursday morning, ministers from all the countries involved were brought onto the stage one by one at a packed press conference as each new member was announced. It was a cheering moment after many days of tense negotiation when progress on a climate deal has been tortuous.

BOGA co-founder Denmark, the EU’s largest producer of fossil fuels as recently as 2019, is also home to some of the world’s largest companies producing wind turbines. The country has already banned further oil and gas exploration on its territory and will end all production by 2050.

“We believe this day marks the beginning of the end for oil and gas,” said Climate Minister Dan Jørgensen. “Our members have pledged bold and tangible action, not just talk. This course of action is no doubt hard, but we truly believe we need to do this. We are unable to accept the consequences if we fail.”

Andrea Meza, Costa Rica’s minister of environment and energy, said the science is clear and countries must act.

“Every dollar invested in fossil fuels is a dollar that has been lost to renewables,” she said. “It has to stop. This is not an easy path, we have reserves and people want to exploit them, but we have decided to make that impossible under law.”

Per Bolund, Sweden’s deputy prime minister and minister of environment, said his country is “very proud to join this organization. It is the only way forward. We pledge that by the summer of next year we will have legislation in place to make it illegal to hunt for oil, gas, or coal on our territory. Renewables are the only way forward.”

While the absence of large oil producers was noticeable at the launch event, it is significant that France, Sweden, Ireland, and Italy, four other members of the European Union with potential to exploit large fossil fuel reserves, are among BOGA’s founding members alongside Denmark. Ireland has already passed legislation that prevents fossil fuel exploration on its territory—which has potentially rich oil and gas reserves, the shallow sea around Ireland being 10 times its land area.

Greenland, with its historic ties with Denmark, has also banned fossil fuel extraction, although it is said to have enough oil reserves to power the entire world for nine months.

The U.K., which is considering allowing a new coal mine in Cumbria 150 miles from where COP 26 is taking place, and the giant new Cambo oil field west of Shetland thought to contain 800 million barrels of oil, was quick to issue a statement defending its position.

A government statement said ministers were committed to working with BOGA to transition away from fossil fuels.

“No other significant oil and gas producing nation has gone as far as the U.K. in supporting sector’s gradual transition to a low carbon future,” the statement claimed. “While the U.K.’s reliance on fossil fuels continues to fall, there will continue to be ongoing but diminishing need for oil and gas over the coming years while we ramp up renewable energy capacity.”

However, it is clear that if the government intends to sanction the new oilfield off Shetland, with exploitation starting in 2022 that would operate for 25 years, the U.K. could never join BOGA.

In late August, a Johnson cabinet minister claimed approving Cambo and letting go into production didn’t necessarily mean the oil would be burned. “The beauty of oil is you can actually store it,” Scotland Office Minister David Duguid told BBC Good Morning Scotland, ahead of a “fact-finding” mission to Aberdeen to meet the project owners. “If the Cambo project, field, does get the go-ahead, what that will get the go-ahead for is to extract that oil and gas. What you’re talking about is the consumption and the combustion of that oil and gas.”

Lee Waters, the Welsh deputy minister for climate change, said his country had already banned fracking for gas and extracting coal and would leave the fossil fuel industry.

“It is time Boris Johnson got real,” Waters declared. “It is time for action, not words. The science is clear that we need to put policies in place now that start drastic reductions in carbon emissions, not rely on technical fixes 10 or more years away that won’t do the job. Wales was among the cradles of the industrial revolution with our coal and heavy industry, now we must be part of the rapid transition.”

Quebec Premier François Legault said his province “has had the courage to end all oil exploration. It has been hard, there has been opposition, but we have to follow what the science is saying.”