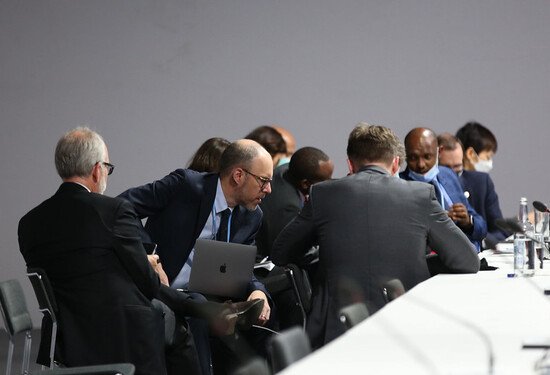 As participants at the COP 26 climate summit looked ahead to a new round of negotiating text expected overnight or early Friday morning, national delegations still had their work cut out for them in areas like climate finance, financial support for loss and damage, countries’ deadline to adopt more ambitious Paris Agreement targets, and the contentious Article 6 dealing with carbon markets and credits.

“We’re starting to get really strong national interests coming in from different countries,” with “everyone trying to see what they can get out of the package,” one senior official told a media briefing Thursday afternoon. She said delegates were reaching the “peak of the battle”, with a lot of frustration as countries consulted each other in search of a better outcome to the talks.

With key issues like loss and damage facing a possible impasse, another observer said proposals and side deals were beginning to emerge between countries and groups of countries, with significant concern about the “many layers of complexity and issues to be considered” at the COP.

Vulnerable countries were looking for signs of a “credible acceleration” in climate ambition—COP-talk for countries’ commitments to strengthen their responses to the climate emergency. That agenda would require countries to submit new Nationally Determined Contributions (NDCs) under the Paris Agreement ahead of the current 2025 due date, while pressing countries that submitted inadequate NDCs over the last year to do better. As of Thursday, the latest round of negotiating text called for 2022 updates, but conference participants were watching carefully to whether that target survived the overnight round of revisions.

With 20 or so major agenda items to discuss, many of them interwoven with other negotiating tracks, finance negotiations at COP 26 were always expected to be complicated. And that was before it became clear that wealthy countries had failed to meet their long-established 2020 deadline to deliver US$100 billion per year in international climate finance, leaving that longstanding item to take up valuable air time and oxygen during negotiations.

“The plan does not provide a sufficient response on the $100-billion pledge from the perspective of quantity, quality, or accountability,” international climate diplomacy specialist Eddy Pérez said in the days leading up to the COP. “So in Glasgow, the price of cooperation to reach an ambitious climate action package will increase, and developing countries are going to come in with a much more direct ask on the issues that weren’t addressed in the delivery plan,” particularly climate adaptation funding and grant- rather than loan-based financing.

By mid-day Thursday, finance negotiations were “getting more complicated by the hour on how to capture balanced allocation for adaptation finance and finance for lost and damage,” an observer said. Those talks were “three-dimensional to say the least,” making it “really hard to try to narrow down some of these options”.

Discussions have also opened on what climate finance will look like after the current funding period ends in 2025. Some countries are looking for a commitment of $1.3 trillion per year, split evenly between mitigation and adaptation. Others are angling for a COP decision that focuses on process issues, with no dollar figure mentioned at all.

A key question on loss and damage was how the eventual funding to the world’s most vulnerable countries will be channelled. Existing mechanisms like the UN Green Climate Fund might be less than ideal, but past experience with the GCF itself shows that setting up a new fund could take up to four years—when communities need the money right now.

Reaction to some of the highly technical discussion on Article 6 of the Paris Agreement began to coalesce late Thursday, with groups expressing concern about draft rules allowing countries to double-count their emission reductions—by including them in their NDCs, then selling carbon credits to the corporations that financed the work. Even if the offsets were legitimate, the net result would be to allow big carbon polluters to keep on emitting in exchange for the emission reductions they funded elsewhere—while the host countries simultaneously took credit for the emission cuts rather than having to achieve them separately.

“During this final stage of COP 26, the United States, Brazil, Japan, and the UK Presidency are caving in to fossil fuel interests to allow companies to greenwash their climate impact and brand themselves as carbon neutral, even though there is no certainty that these companies will really pay for extra emission reductions,” warned Carbon Market Watch Policy Director Sam Van den plas. “Voluntary carbon markets and offsets cannot be used as an excuse for real climate inaction.”

“With hundreds of fossil fuel lobbyists at COP 26, it’s not surprising to see how governments are endorsing loopholes under the Paris Agreement to help them greenwash their business,” added Catalina Gonda, climate specialist at Argentina’s Fundación Ambiente y Recursos Naturales (Environment and Natural Resources Federation). “Article 6 rules cannot leave the door open for mass-scale assaults on human rights,” and “countries cannot put the profit of the fossil fuel industry before people and planet.”

Tom Goldtooth, executive director of the Indigenous Environmental Network, added that “we need real reduction, and to keep fossil fuels in the ground. Carbon offsetting perpetuates the theft of Indigenous people’s land and our territories. Our brothers and sisters have been protecting their lands and forests for thousands of years. Carbon offsets are a new form of colonialism.”

“We do not believe in false solutions, or in compensation, in the investment of resources in one country while allowing another to continue to pollute, without really tackling the root of the problem,” said Brazilian Indigenous leader Sônia Guajajara.

“We, Indigenous peoples, hold 82% of biodiversity on the planet. But here [at the COP], we are the ones with the smallest space for participation,” Guajajara added. “Without recognizing, without demarcating Indigenous lands, there will be no solution to the climate crisis.”