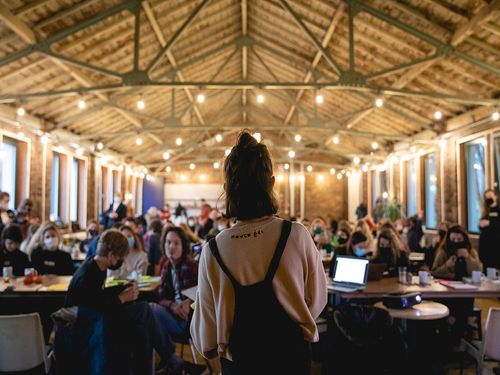 It all started with an email.

Mark McVeigh was procrastinating one day, as university students do, when he decided to contact Retail Employees Superannuation Trust (REST)—one of Australia’s largest pension funds—to ask what its policy was when it came to climate change risk. The then-22-year-old Australian had been a member of REST since he worked at a grocery store as a teenager and wanted to know how it was investing his money, Corporate Knights reports.

Inspired by what he had read about the power of shareholder activism, McVeigh sent an email to REST, asking what the pension fund was doing to gauge climate risk in its investments. REST representatives directed McVeigh to a generic one-line statement on its website about taking ESG (environmental, social and governance factors) into consideration in its decisions. This wasn’t good enough for McVeigh.

“From there, I kept asking questions,” he said. “They wouldn’t answer me. I got quite stubborn and arrogant about that and decided to try to contact somebody to help me out.”

What happened next would quickly snowball into a years-long legal battle that would send ripples through Australian pension funds and around the world.

McVeigh is one of a growing number of young people who have sued large companies, institutions, and governments over their failures to tackle the climate crisis. Youth have been at the forefront of the climate movement for many years, making the argument that their future is being squandered by the inaction of current and past leaders. But since many are not old enough to vote in their countries, and their concerns have been largely ignored after taking to the streets to protest, some are increasingly finding another avenue to voice their outrage and dissent: the courts.

In Germany, nine youth climate activists successfully took the government to court recently, arguing its climate laws didn’t do enough to limit global temperature increases to 1.5°C and violated their fundamental rights. Germany’s highest court sided with the young activists in March and declared the climate laws unconstitutional, as they put too large a burden on future generations. The court ordered the government to come up with more concrete emissions targets. And last year, six Portuguese youth activists filed a lawsuit against 33 countries at the European Court of Human Rights in Strasbourg for failing to do their part to cut emissions.

There have been at least five youth-related climate lawsuits filed in Canada, with varying degrees of success. In one of those cases, La Rose et al. v. Her Majesty the Queen, 15 young people sued the federal government, claiming that it violated their Charter rights by failing to adequately address the climate crisis. Last year, the Federal Court dismissed the claim before it could go to trial, after the government successfully argued that it didn’t have a reasonable cause of action. The young plaintiffs are appealing that decision.

In Ontario, a lawsuit brought by seven young climate activists aged 13 to 25 has made it a step further. In the application, Mathur v. Ontario, the plaintiffs argue that the provincial government violated their rights in 2018 when it lowered its 2030 emissions targets.

Shaelyn Wabegijig is one of the young plaintiffs. The 24-year-old grew up in Rama First Nation and felt it was important to get involved with the lawsuit because of the uncertainty about the planet’s future.

“It’s really hard to plan my life when I don’t know what’s going to happen next—with what’s happening around the world, crazy storms and fires. It’s really terrifying,” she says. “I really feel like I’m fighting for my future.”

In 2020, a judge threw out a government motion to dismiss the lawsuit in a decision that environmental lawyers say confirms that climate change can pose risks to Charter-protected rights. The decision was also the first time a Canadian court ruled that citizens have the right to seek redress through the courts for those harms, says Fraser Thomson, a lawyer with Ecojustice who is representing the young plaintiffs.

“Climate change poses dire threats to the most fundamental rights that are guaranteed under the Charter of Rights and Freedoms,” he says. “It’s only a matter of time before that evidence gets before a court.”

When McVeigh’s inquiries to REST yielded unsatisfactory results, he contacted an organization called Market Forces, which works to expose financial institutions that invest in projects that are harmful to the environment. Market Forces put McVeigh in touch with David Barnden, an Australian environmental lawyer who represents youth in climate litigation. With Barnden’s help, McVeigh launched a lawsuit against REST, calling for more transparency and a more comprehensive climate policy.

The legal process unfolded over a number of years while McVeigh was completing an honours degree in ecology. It wasn’t until the night before a three-day hearing, at 11 PM, that REST approached McVeigh with a settlement deal. “[REST] basically was hoping that we were just going to back down, which we weren’t planning on doing,” McVeigh says.

The wider Australian superannuation industry was taken aback at the news of the settlement and started amending climate policies to catch up. In recent years, many of these funds have been slowly divesting from fossil fuels, but groups like Market Forces say it isn’t happening quickly enough.

In Canada, a group called Shift Action for Pension Wealth and Planet Health (Shift) has been mobilizing beneficiaries of the largest pension funds in the country to demand more transparency about how they’re managing climate risk. One of Shift’s campaigns involves organizing students and teachers to pressure the Ontario Teachers’ Pension Plan (OTPP) to make green investment decisions with teachers’ retirement savings. Before the campaign started three years ago, OTPP publicly shared little detail about what concrete actions it was taking to tackle climate risk. Shift started by asking questions and teaming up with concerned students.

Aliya Hirji, a 16-year-old high school student from Toronto, is working on the campaign as a youth coordinator. She has been mobilizing other young people to appeal to their teachers to engage with OTPP on these issues. The students’ and teachers’ interests are ultimately aligned: young people want to ensure a safe climate future, while a growing number of teachers want to protect their retirement savings from climate risk. Hirji and other students fear that if pension funds and other institutions don’t immediately start to divest from fossil fuels, it may be too late to prevent the worst impacts of climate change.

A coalition of activists is involved in the campaign, including youth-led climate action group Fridays for Future Toronto and a group of working and retired teachers. Together with Shift, they’re demanding that OTPP immediately put an exclusionary screen on new oil, gas, and coal investments; phase out all current fossil fuel investments by 2025; and completely decarbonize its portfolio by 2030.

Since the campaign launched, there has been some progress. Last January, OTPP announced a commitment to achieve net-zero by 2050. In the eight months that followed, OTPP continued to invest in fossil fuel infrastructure and provided few concrete details on how it would reach that goal. Then in mid-September, the pension fund announced some big news: interim targets to reduce its portfolio’s carbon-emissions intensity by 45% by 2025 and 67% by 2030. Teachers, students, and other campaigners welcomed these targets as a step in the right direction but also pointed out that OTPP failed to mention how it will meet those goals by ultimately eliminating its exposure to fossil fuels.

Beneficiaries organized by Shift sent letters to the country’s 10 largest pension funds, including OTPP, at the end of September, notifying them of their fiduciary obligations when it comes to climate risk.

“What we’re getting right now is a pat on the head from the funds, but they’re not clearly identifying that they have this obligation, and we need to be clear that they do,” says Adam Scott, the director of Shift.

Environmental lawyers believe the next logical step in these letter-writing campaigns could be litigation if the targeted pension funds don’t provide satisfactory responses to the beneficiaries demanding answers.

For many young people who get involved in climate litigation, it often starts with the simple act of asking a question. McVeigh says that for him, it also took a certain level of persistence to follow up on his queries.

“I don’t think I’m anyone special. All I did was ask some questions.”

McVeigh says huge changes can occur in the financial sector if more young people ask direct climate-related questions of the directors of institutions. Simply sitting in on an annual general meeting and inquiring about what a large company is doing to tackle the climate crisis can provoke directors to better educate themselves about the issue, says McVeigh.

Since his settlement, McVeigh has heard from people all over the world hoping to replicate what he did in Australia. Now, he says he wants to help break down the barriers between young people and those who have the power to make decisions about their money, whether in pension funds, banks, or insurance companies. That way, they’ll be able to ask their own questions.

“All I did was send a couple of emails to REST. And I may have followed up because I was a bit stubborn, but anyone can do that,” he says.

This story was originally published by Corporate Knights as part of Covering Climate Now, a global collaboration of news outlets strengthening coverage of the climate story.