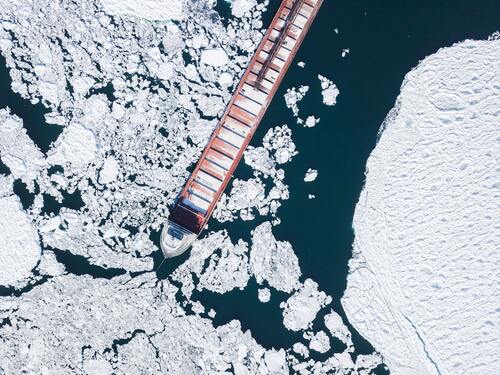 The First Peoples of the circumpolar North will have a say in the increase in Arctic shipping likely to result from climate change, after the Inuit Circumpolar Council (ICC) became the first Indigenous organization to receive provisional consultative status from the UN International Maritime Organization.

“This is a significant accomplishment for the ICC, especially given our relationship with and reliance upon the coastal seas and Arctic Ocean by Inuit communities throughout Inuit Nunaat,” ICC Chair Dalee Sambo Dorough said in a release this week.

“This status is crucial for us,” Dorough said, adding that the new access to the IMO will enable Inuit to “advance our status, rights, and role autonomously from those whose interests are not always neatly aligned with our perspectives as Indigenous peoples.”

With Arctic shipping set to increase, the IMO’s decision will ensure that “Inuit will have our own voice,” the ICC release states. “Community members will be heard on issues from the importance of Arctic shipping, to concerns we have regarding our marine environment from potential spills, underwater noise, black carbon, safe shipping corridors, greywater discharge, invasive species, and a host of other issues.”

With nearly 90% of international trade volume shipped by sea, “Inuit must have a seat at this international table where issues that impact the Arctic, its coastal seas, and where multiple ocean governance concerns are discussed,” the ICC says. “The oceans are a source of life for many across the globe, but for Inuit as a maritime people the sea ice and the ocean are central to our culture.”