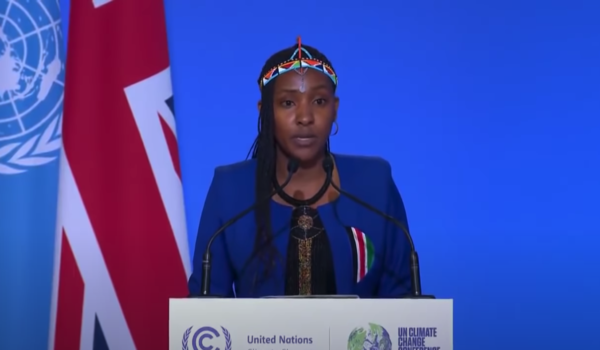 COP 26 negotiators are betraying the world’s most imperiled populations and leaving them to face urgent, climate-driven risks without survival funding, representatives of the Climate Vulnerable Forum (CVF) said earlier this week, in response to the COP 26 draft decision released Wednesday.

“We need to bring attention to the fact that our nations are burning on the front lines of a planet on fire,” said Abul Kalam Azad, Bangladesh’s special climate envoy to the CVF, part of a news conference that urged the developed world to act quickly and with compassion. Azad expressed the bitter dismay felt by many climate vulnerable nations at the lack of specifics on adaptation and loss and damage in the draft.

Hundreds of civil society organizations around the world have signed a petition to embed the CVF’s proposed Glasgow Emergency Pact into the final COP 26 decision. The pact calls for a delivery plan for the US$100 billion in annual climate finance that wealthy countries first promised for 2020, as well as the remaining $400 billion to be delivered by 2024. It also urges a 50-5- split for all climate finance between adaptation and mitigation.

The pact would require all countries, but especially big emitters, to submit a new round of Nationally Determined Contributions (NDCs) at every COP, rather than every five years as is currently the case.

That suggestion, at least, “has gained traction” amongst COP heavyweights, reports Reuters, noting that UN Secretary General António Guterres “told delegates last week that, if COP 26 fell short, countries should be required to revisit their climate plans every year.”

U.S. climate envoy John Kerry has also “backed more regular reviews,” though he has yet to express specific support for annual ones.

Azad urged the COP Presidency “to ensure that from COP 27 onwards, loss and damage be made a standing item” on the agenda. CVF members have said they are skeptical about any progress on loss and damage at future summits if it is not immediately made an agenda item.

So far, however, the draft text of the COP 26 decision “completely ignores the desperate calls” from small island states like Vanuatu for loss and damage support, said Harjeet Singh, speaking on behalf of Climate Action Network-International.

“What we are getting here is words, words, and more words,” he said. “If we really want to stand in solidarity with people facing a climate emergency now, this is the time.”

Pointing out that 23 million people were newly displaced by climate emergencies in 2019, and another 30 million in 2020, Singh asked: “Are we asking ourselves where these people are going?”

The crisis of trust that has plagued these talks will worsen without action from developed countries, Singh added.

“Those leaders who have come here and made grand announcements about what they’re going to do 10, 20, 30 years from now, that’s not going to be helpful, and we cannot trust them if they do not want to help people who are suffering right now,” he said.

He denounced the United States, the EU, and other wealthy nations for saying “let’s talk about insurance,” when they are approached for loss and damage support.

26-year-old climate activist Elizabeth Wathuti from Kenya testified both to the immediate urgency of the climate emergency, and to her impression that too many in the developed world do not yet feel the emergency “in their hearts”. She spoke of having seen with her own eyes, three young children crying at the side of a dried up river after walking 12 miles with their mother to find water in her drought-stricken country.

In 2016, Wathuti founded the Green Generation Initiative, a climate education program that empowers youth to act to create a greener, more sustainable world. The initiative has helped Kenyan youth plant more than 30,000 fruit trees in an effort to ensure a degree of food security. But “these trees will not survive on a planet 2.7°C warmer,” she told the news conference.

24-year-old Ugandan climate justice activist Vanessa Nakate said the Earth has already been made hot enough by a fossil-based economy. She said a world warmer by 2.4°C will be a “death sentence” for communities like her own.

“1.2°C is already hell for us,” Nakate said, adding that 1.5°C of average warming will still not be safe for many communities across the Global South, and 2.4°C warmer will mean total global devastation.

“We cannot eat coal. We cannot drink oil. And we cannot breathe so-called natural gas,” Nakate said. She demanded urgent action to cut emissions, and that loss and damage be placed at the centre of COP negotiations.

CVF advisor Saleemul Huq proposed one addition to the Emergency Pact: a Glasgow Loss and Damage Facility that would build on the existing Santiago Network to ensure delivery of loss and damage finance.

Climate Home News reports that the Santiago Network, first agreed to at COP 25 in Madrid in 2019, “could be up and running within a year, after negotiators struck a deal at COP 26 on what its remit should be.” That happened despite efforts by the developed world to punt the deal further down the road to COP 27. The network “will act as a coordinator, linking those who can provide finance or expertise, like governments, charities, companies, or banks, with those in need of help,” Climate Home says.