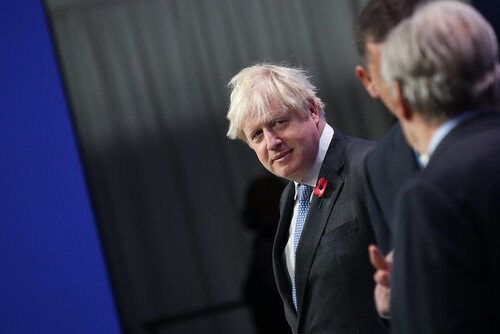 GLASGOW, November 11, 2021 – What a difference four years can make. In 2017 the man who became the UK’s prime minister, Boris Johnson, wrote in the London Daily Telegraph: “It is fantastic news that the world has agreed to cut pollution and help people save money but I am sure that those global leaders were driven by a primitive fear that the present ambient warm weather is somehow caused by humanity; and that fear—as far as I understand the science—is equally without foundation.”

On November 1, Johnson came here to open the UN climate conference, COP 26. His speech of welcome included a chilling warning.

The world, Johnson said, has “run down the clock” on climate change, leaving it standing at “one minute to midnight”. He compared the situation with a scene from a James Bond film, saying world leaders were grappling with a “doomsday device” that could wipe out humanity.

It’s a drastic change of tack, and it could ultimately cost Johnson dear, not to mention the rest of us. One of the most contentious issues here, in the closing hours of the search for a conclusion that could salvage the U.K.’s reputation, is what’s called “loss and damage”—essentially the harm caused by changing climate, who is responsible for it, and what compensation those affected should receive.

Catherine Pettengell, interim director of Climate Action Network-U.K., is critical of the country’s role as host of COP 26. “The U.K. has not done the groundwork needed on adaptation, and on loss and damage,” she told media yesterday.

“Six years on from the Paris COP of 2015, it has no plan for action, despite the pandemic providing an extra year to work on the problem,” Pettengell added. “Loss and damage in particular has not been regarded as a priority at this COP.”

“The U.K. didn’t prepare the ground for the COP over the last two years, which is why it’s now going down to the wire. But it does have a role to play in keeping up ambition, not in watering it down.”

Asked by The Energy Mix who she blamed for the U.K.’s poor performance, Pettengell said “the buck must stop with Boris Johnson, as he is the British prime minister. Hopefully this could be a turning point for the national government of the U.K. to start to follow the example of Scotland’s devolved government,” which last week announced a symbolic but potentially significant £1-million fund to help vulnerable countries cope with loss and damage.

This week, Scotland doubled that still-symbolic contribution to £2 million. “The hero of COP 26 is no one else but the Scottish first minister, Nicola Sturgeon, for making that extremely important donation,” Saleemul Huq, director of the International Centre for Climate Change and Development (ICCCAD) in Bangladesh, told media yesterday. “I salute her.”

“The question I’m left with,” Pettengell said, “is: where’s the ambition from the custodians of the Paris COP? In 2015, that laid the foundations. This is the COP where we should take forward only the most ambitious parts of the Paris Agreement. Now is our moment to shine.”

“We probably won’t leave Glasgow having reached a way to achieve the 1.5°C warming limit agreed in Paris,” she added, “but we shall have to do that within the next year or so.”

Boris Johnson needs COP 26 to be seen as a success, as much within the UK as globally. If in the next few days it is judged to have failed to deliver, the blame is likely to fall not on the conference chair, Alok Sharma, given the job by Johnson, but on Johnson himself. That would be a political blunder he could ill afford—and probably a disaster for the planet as well.

Earlier in the week, however, Johnson was said to be returning to Glasgow for reasons that had little to do with the COP, the Paris accord, or a 1.5°C target. Facing what the British media is calling a Sleazegate scandal related to a parliamentary ally, and with his public approval at an all-time low, Johnson evidently thought UN climate negotiations would be a more hospitable environment than 10 Downing Street in London, the Washington Post reported.