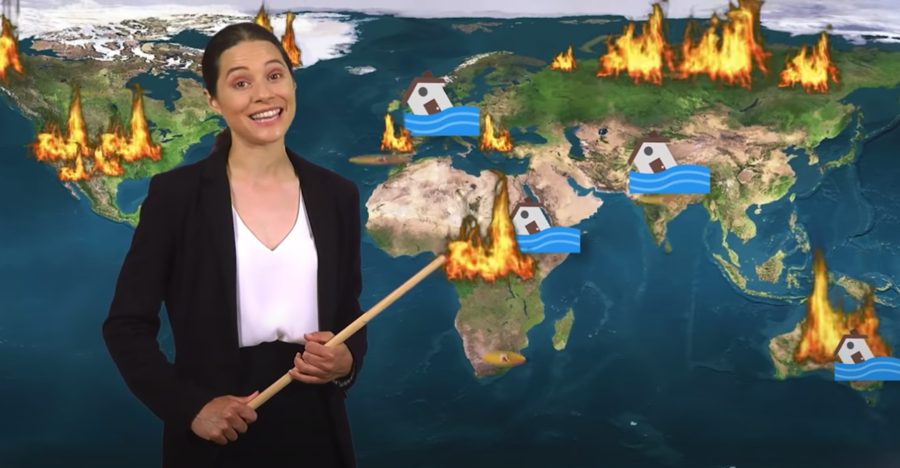 Those seeking some comic relief from the news emanating from COP 26 need look no further than Juice Media’s latest Honest Government Ad, “Net Zero by 2050”, available on YouTube.

Delivered by a silken-voiced PR rep from “The Government™” (yes, trademarked), whose expression veers wildly between a beaming smile and a rapidly-quelled Exorcist glare, the ad by Australia’s powerhouse satirists will make you laugh, probably cry, and will definitely fuel some righteous anger.

Which is clearly the intent.

“Hello, I’m from the government with an update on how we’re handling the climate crisis,” the smiling PR rep begins, before launching into a litany that includes the grotesque stupidity of banking on reforestation carbon credits as wildfires worsen everywhere around the world

Bitter gags abound, including the rep’s astute observation that a thermometer is rather phallic looking—highly appropriate, she says, given that it indicates the degree to which we are all F**KED if governments continue delaying and misleading on what actually needs to be done to rein in global heating.

And then a truly inspired moment when the PR person giddily coins a brand new word—planphlet (plan + pamphlet)—to describe the “net-zero plan” documents currently flying thick and fast out of ministerial offices and boardrooms around the world. Australian Prime Minister Scott Morrison’s decidedly thin plan is Exhibit A.

But behind all the gags and one-liners there is one simple, devastating message: governments are lying to us about the climate crisis, and they need to stop.

The video is dedicated to #FridaysforFuture founder Greta Thunberg, with a final caption recognizing her as the person: “who asked governments to be honest about the climate crisis.”