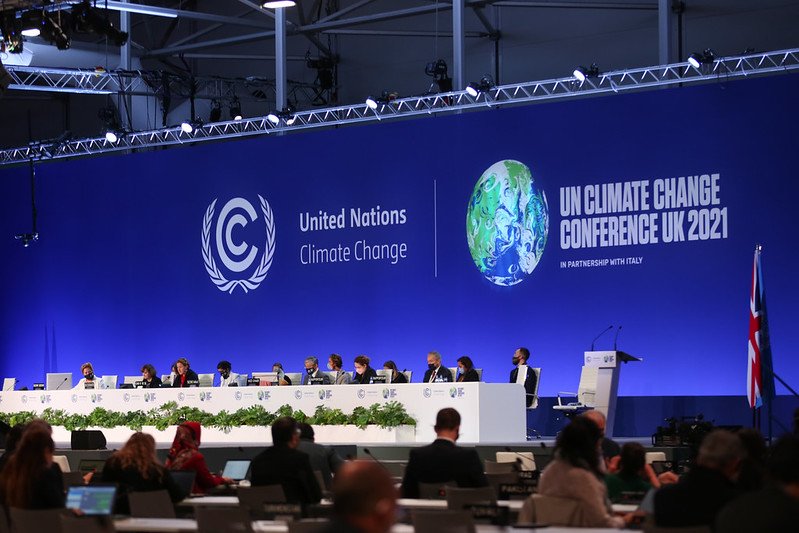 A new draft of the final COP 26 declaration expected Tuesday night or Wednesday morning may open a path for countries to toughen up their carbon reduction targets ahead of schedule, but give the world’s biggest carbon polluters a chance to opt out, Bloomberg Green reported Tuesday, as negotiations at the marathon 12-day climate summit in Glasgow entered their final, decisive phase.

After releasing the draft, COP President Alok Sharma was expected to ask negotiators to “consult their capitals” before coming back for the final round of arm-twisting and horse-trading.

Sharma “has said that some progress has been made, while acknowledging that it has been ‘clearly not enough’. He could hardly have done otherwise,” writes The Energy Mix correspondent Alex Kirby.

The updated draft will land just as a new analysis by the respected Climate Action Tracker shows the world still on course for average global warming of 2.4°C, even after a week of frenzied pledges, promises, and alliances—and even if all of the participants in those announcements actually keep their promises.

“So far, the proposals look set to disappoint nations most vulnerable to climate change, which are pushing for more radical steps,” Bloomberg wrote early Tuesday. “Those countries have been calling for governments to keep improving their emissions reductions plans as often as every year until the world is on track to stem temperature increases to 1.5°C. They want urgent action that will have an impact in the crucial next decade.”

Astonishingly—given the litany of devastating climate impacts delegates have been hearing about with average warming now around 1.08°C—Bloomberg reports major disagreement among negotiators about the ultimate temperature goal of the Paris agreement. That wrangling was set up, the news agency explains, by “diplomatic gymnastics” in 2015 that left countries with an ambiguous end goal for climate stabilization, somewhere between “well below 2.0°C” and preferably 1.5.

Nearly three years later, after the Intergovernmental Panel on Climate Change issued its influential 1.5°C pathways report, an Oxfam representative declared that “every tenth of a degree of warming is a choice between life or death,” at a time when “climate change has set our planet on fire, millions are already feeling the impacts, and the IPCC just showed that things can get much worse.”

Now, “the U.K.’s mantra going into COP has been to ‘keep 1.5 alive’,” Bloomberg writes. “But there’s pushback on hardening the language to highlight 1.5°, several people familiar with the situation said. Two officials said they expect the language to be in line with the conclusions of Group of 20 leaders in Rome last month, which barely went beyond the Paris accord.”

But all may not be lost on that front. “The High Ambition Coalition, an alliance representing more than 100 countries (including the Alliance of Small Island States, the Least Developed Countries Group, and Africa Group) now supports a COP 26 deal targeting emissions reductions in line with limiting temperature rises to 1.5°C, doubling adaptation finance, and slashing fossil fuel subsidies,” veteran COP-watcher Ed King wrote Tuesday morning. “The group signed up 13 new members on Monday, with more promised on Tuesday and Wednesday.”

One section of the 2015 Paris climate agreement calls for a 2023 “global stocktake” to assess countries’ progress in getting greenhouse gas emissions and climate impacts under control. Some discussions over the last week have considered whether countries could be pressed to update their Nationally Determined Contributions (NDCs) under the Paris deal ahead of the stocktake, in 2022. Now, Bloomberg says the U.K. government, in its capacity as COP President, may allow extra latitude with a deadline in time for the stocktake.

“Some countries—including India, one of the biggest emitters—still haven’t submitted the plans that were due ahead of this round of COP talks,” Bloomberg writes. “Negotiators are separately discussing mechanisms to review and oversee those blueprints.”

India’s Prime Minister Narendra Modi sent a charge through COP 26 delegates early last week, with a surprise promise that his country will hit net-zero by 2070 and produce half of its electricity from renewable sources by 2030. But India’s delay submitting its NDC means Modi’s promises are not yet a formal commitment under the Paris deal.

Overall, negotiators and observers are watching for the delegations that will move to delay or obstruct a robust COP decision as the clock winds down to a final outcome. “High on most campaigners hit lists are Saudi Arabia, Brazil and Australia—three countries with slick negotiating teams and a track record of laying traps and throwing bombs to impede progress,” King writes. “The trio—who boast heavy oil, forests and coal interests—stand accused of stopping fossil fuel reduction being mentioned in texts and blocking efforts to close loopholes in carbon markets. So far, the EU and U.S. seem unwilling to step in.”

Another question yet to be answered is whether the avalanche of announcements and promises last week will be reflected in the eventual COP decision, or left as informal side offers that cannot be as effectively recalled or reinforced in future COP negotiations. To some extent, that’s a moot point, since all commitments under the Paris agreement are voluntary, and the moral and political suasion on countries largely comes from within their own borders.

But if the Paris process is supposed to be about peer pressure among nations, as many observers have been saying over the last few weeks and the last several years, it mattered that Sharma released a notably weak, equivocal “non-paper” Sunday, with bullet points intended as an outline for the eventual COP decision. As The Mix reported Monday, the “non-paper” contained not a single use of the words “energy”, “fossil”, “fuels”, or “energy”, a stunning and embarrassing omission that one veteran negotiator called “non-sensical”.

All of which underlies the basic questions a watching world wants the delegates to decide, The Mix’s Kirby writes: has Glasgow succeeded or failed? Has it taken decisive action to slow the pace at which the planet is heating? Two of the most polluting nations, China and India, are of key importance here: they will have to be much more ambitious than hitherto in agreeing to cut their emissions if this is to qualify as a good COP. Perhaps they will. So far, nobody knows. More widely, many more countries and smaller units, like cities, need to phase out fossil fuels, and not just repeat old promises.

Money matters. So far the poorer nations have had to make do with too many unrealized promises of funding to help them to cut their emissions, in place of the hard cash they need now. This would help them to adapt to the heating that is already happening, with more inevitably ahead.

Much of the focus this week has been on wealthy countries’ “breathtaking” failure to meet their 2020 deadline to deliver US$100 billion per year in climate finance to the developing world. But finance negotiations are also beginning to focus on the period after 2025, when the current (broken) promises are meant to be renewed and increased. On Tuesday morning, Climate Home News said developed countries “see the issue as largely procedural and argue that Glasgow should mainly ‘decide to initiate deliberations’ without prejudging the outcome.”

But developing countries “have started to put numbers on the table,” Climate Home writes. “African nations and a group of 24 ‘like-minded’ developing countries that includes China and India are calling for at least $1.3 trillion to be mobilized every year for the rest of the decade. At least half of the money should got to adaptation and at least $100 billion should be delivered in grants, they say.”

Climate Home cites Guinea’s chief negotiator, Ahmadou Sebory Toure, telling a COP plenary session on behalf of a bloc of 77 developing countries plus China that vulnerable nations will need “adequate and reliable finance” to be able to strengthen their climate plans. “A COP without a concrete outcome on finance can never be successful,” he stressed. “Finance is an enabler for ambition in developing countries.”

Then there’s Article 6, the rules for a global carbon market trading credits for carbon reductions. Agreement on this could be liberating, Kirby says, if it happens. Or devastating, our senior writer Gaye Taylor reports today, if negotiators get the details wrong.

There have been good vibes here in Glasgow this last couple of weeks, and a positive atmosphere, Kirby writes from the conference venue. But general bonhomie doesn’t go far in bringing the mercury down, in preventing sea levels from rising and forests from burning to ash, in saving humans and wildlife from hideous and needless deaths.

There’s not even any certainty that the COP will end as planned, late on Friday, November 12. It may follow an increasingly common pattern and stumble on into Saturday, say the optimists. Several of the pessimists are planning for a conclusion next Monday. [There’s an informal betting pool onsite, and I’ve placed my virtual wager at 2:00 AM Monday. But I was just trying to be perverse, and didn’t bother to specify time zone—Ed.]

One friend expects no change, and not much to hope for, Kirby adds. I asked him how he thought the COP would end. “It hangs in the balance, as usual,” he said. “I do fear this will go into the weekend, but right now I don’t fear a fiasco—just stasis (which is fiasco enough).”