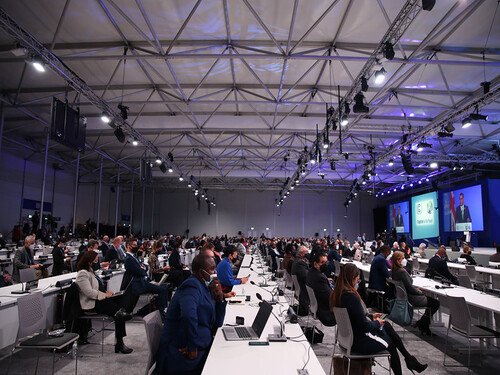 The first draft of the agreement that will mark the COP 26 summit, now in its final days, as success, failure, or a damp squib, went into circulation Wednesday morning at the conference venue in Glasgow, Scotland. It won’t be the last word, but it’s a signal that the endgame has begun.

The Global Strategic Communications Council (GSCC) called the draft a significant improvement on the Paris Agreement when it comes to mitigation and the 1.5°C target,” in a summary of the text that could be seen as damning it with faint praise. Developing countries, particularly those most vulnerable to climate change, described it as lop-sided, saying it would not help the most vulnerable countries with technology transfer and funds.

Fossil fuels are named as a problem for the first time in any COP text, and that is seen as a major advance. A weakness, though, is that only coal is named for phaseout, and mention of oil and gas is omitted.

There are timelines and deadlines for countries to return by 2022 and 2023 with new, enhanced targets aligned with a 1.5°C future. But where the text is specific on GHG cuts, it’s sketchy on finance, adaptation, and loss and damage, three topics of vital importance here—and especially for poorer countries, a matter of life and death on the ground at home. Six years after Paris, this lack of detail is damning.

For the GSCC, there is a welcome for the highlights it identifies, including the commitments for 196 countries:

• To submit net-zero targets and plans in line with Paris by 2022;

• To accelerate the phaseout of coal and cut fossil fuel subsidies.

It applauds the plan to provide the $100 billion in aid to the developing world first promised at the 2009 COP in Copenhagen but still not fully delivered, and notes the lack of any push to accelerate funding. It says the section on loss and damage is important “but lacks specifics”.

Quamrul Chowdhury, a Bangladeshi citizen, has many years of experience as a negotiator for the G77 and the Least Developed Countries group. Before the draft was released, he explained his two key priorities for Glasgow adaptation and mitigation.

“On adaptation,” he said, “its vital importance in light of increasing temperatures should be central to any architecture. Fixing a global goal on adaptation is a measuring rod for the success of Glasgow.”

“Mitigation? Always remember the urgency of action towards the Paris temperature goal of well below two degrees, pursuing efforts to 1.5 degrees; and emphasizing the importance of keeping 1.5 degrees in reach. There’s the importance too of responding to the science, and revising national emission reductions at least annually. “

The Energy & Climate Intelligence Unit (ECIU) assessment is that the draft addresses one of those priorities but not the other. “Initial assessments suggest a reasonably strong starting point on emissions cuts, fossil fuels, and keeping to 1.5°C, with more ambition needed on adaptation, loss and damage, and finance,” the organization states. “We can expect several more iterations before Friday’s scheduled close.”

Ambition is not just about GHG cuts, said Power Shift Africa Director Mohamed Adow, an observer in Glasgow. In a series of tweets, he made the case for a “needs-based, long-finance goal consistent with a 1.5°C trajectory before 2025,” arguing that without green support and adaptation investment, poorer countries are “screwed”.

ActionAid International climate policy coordinator Teresa Anderson said: ”This text is full of fine words of solidarity, lots of urging to action, but it is UN fluff, creating an illusion of action. We are sick of this pretense. We want the phasing-out of all fossil fuels, not just coal.”

She attacked the phrase “net-zero” which appears in the text, arguing that it does not mean reducing emissions from fossil fuels to zero but all sorts of “offsets,” planting trees, capturing carbon. “These are dangerous myths, creating illusions that are in reality unachievable.”

But pulling the opposite way to developing countries are the major polluters, including those with poor, non-1.5°C aligned climate plans. Among the countries that won’t like the draft, the GSCC said Russia and Saudi Arabia are likely to object to the mention of net-zero as too policy-prescriptive. Nor will Australia like the mention of an accelerated coal phaseout. Developing countries want specifics on finance and adaptation, and they will demand clarity in the text.

The Council said analysts believe these talks are at a fork in the road. The two potential routes were summed up in the Climate Action Tracker emissions assessment that landed yesterday. Either countries stick with current 2030 targets that leave the planet on track for a 2.4°C temperature hike by the end of the century, or they twist and hustle a plan to hike goals by 2023 or sooner. Will this text make them feel the heat?

One veteran observer who has been to every COP since 1995 was sanguine: “This is the stage where stuff starts flying around. This is when everyone is keen to spin and set up for the blame game. It means we have an exciting, if tense, 72 hours in store, with the potential for one to two more final cover texts before we can bid fond farewell to the canteen’s ‘fish’.”

But don’t diss the fish too soon. The COP may run on into the weekend (as most recent ones have) as a result of haggling over finance, as well as carbon markets under the dreaded Article 6, which sets rules that countries must abide by so that their promises on emission cuts and carbon targets are turned into reality.

Reports are strengthening that UNFCCC staff are already planning for the dread eventuality of another COP running into overtime.