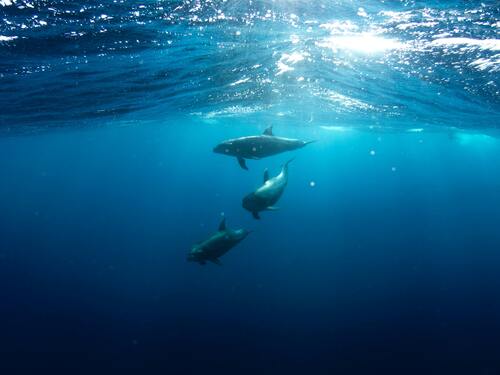 Warming oceans may be absorbing less carbon dioxide than they used to, and scientists say that could have serious ramifications for climate targets.

More research is desperately needed on the impact of climate change on the ability of the world’s oceans to absorb greenhouse gas emissions, Anya Waite, scientific director and chief executive officer of the Ocean Frontier Institute research partnership, told The Canadian Press.

“Climate targets actually haven’t been taking into account the ocean, and we urgently need to take the ocean into account or we won’t be able to reach climate targets,” Waite said in an interview from the United Nations climate change conference, COP 26, in Glasgow, Scotland.

“In fact, the targets themselves may be wrong.”

Oceans that are no longer able to absorb carbon may become carbon emitters, she said.

Waite was in Glasgow in part to drum up support for a North Atlantic carbon observatory, which she said could unite scientists and researchers across the globe to better monitor the problem and work toward its solution. Canada is well-positioned to lead the effort, she added.

The ocean is the most important global carbon dioxide storage depot on the planet, absorbing more CO2 than all of the rainforests combined, according to the Ocean Frontier Institute. “Forty per cent of fossil fuel emissions have actually ended up in the ocean,” Waite said.

About 30% of that absorption happens in the North Atlantic, she told CP, making it the “most intense” carbon sink on Earth.

Dariia Atamanchuk, a Nova Scotia-based researcher with the institute, said that’s possible because of the North Atlantic’s staggering depths, swift currents, and icy temperatures. Cold water holds more carbon, and deep water can store it for centuries, she said.

The oceans and the atmosphere interact in concert, always aiming to balance carbon dioxide saturation, she explained. If the air holds more of the gas than the ocean, the ocean will absorb it. As ocean temperatures climb and currents slow down, the gas could flow the other way.

Scientists have always been aware of this possibility, but an analysis from the institute in April put together 30 years’ worth of data that gave a real-life time lapse of what was happening, at least in the Labrador Sea, between Canada and Greenland, she said.

“There is this clear correlation between the increasing anthropogenic carbon in the atmosphere from fossil fuels and… a parallel increase in how much carbon is stored in the Labrador Sea,” she said.

To better understand the process and what it could mean as changes in the ocean accelerate, she said researchers like her need more time aboard ships and more access to the kind of autonomous underwater vehicles that can withstand the violent conditions in those kinds of waters.

Brad deYoung, an oceanographer at Memorial University, says knowing more about the carbon sink off Canada’s East Coast is just the beginning.

“If you measure what’s happening to carbon in the North Atlantic, it’s a good measure for the bigger picture of the global pattern, but it isn’t everything,” he said.

A North Atlantic carbon observatory would be a “first step toward truly integrated and coordinated ocean carbon measurement” that would bring together academics, government agencies, and organizations from all over the world to figure out what’s happening and whether climate targets need to change, deYoung said.

“We can’t just be doing our little bit on our own,” he added. “It has to be part of a wider team.”

This report by The Canadian Press was first published November 8, 2021.

With ‘Grand Statements’ Over, Small Island States Face ‘Delay and Obstruction’ on Loss and Damage