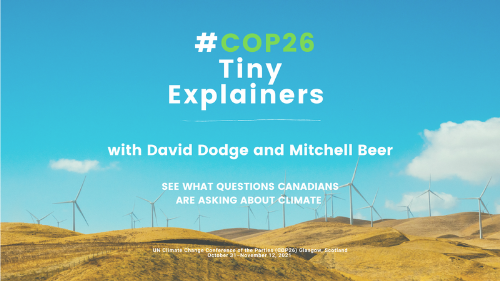 Today’s questions: How has the conversation about a just transition for fossil fuel workers and communities filtered into the negotiating rooms at COP 26? And Lyn McDonell in Toronto asks: If we need to drastically step down consumption to sustainable levels and reduce demand, how do those lifestyle changes connect with a just transition?

A just transition is what it will take to build a transition off fossil fuels that doesn’t leave workers and communities behind, said Patrick Rondeau, just transition advisor with the Fédération des travailleurs et travailleuses du Québec (Quebec Federation of Labour).

“Just transition is about workers’ rights, which are people’s rights, human rights,” Rondeau told The Energy Mix, in the latest edition of the #COP26TinyExplainers video series. As the energy transition progresses, “we have to plan it with them and put them right at the centre of those decisions” in a way that decarbonizes workplaces, maintains jobs where possible, puts in supporting policies where they’re needed, and raises living standards in communities.

For the FTQ, that’s meant a continuing conversation with members on climate change and the energy transition, so that they see themselves in the picture and can chart pathways to an economy without fossil fuels.

“We worked to mobilize workplaces and workers, then we began to implement what we were talking about,” Rondeau recalled. That meant creating a series of just transition labs, joint committees where workers and employees could move towards decarbonized workplaces while addressing jobs.

The next step for the union was to open dialogues with environmental groups, Indigenous communities, employers, and the financial sector. “We have to have that big discussion as a society on just transition,” he said. That years-long effort is paying off in a new just transition body that is scheduled to hold its first meeting next month.

For workers in Quebec—and in provinces like Alberta at the centre of fossil fuel production—Rondeau said it’s crucial to keep just transition discussions practical and concrete.

“It’s about building a bridge for them,” he said. “They’re not in denial about climate change. But when you’re afraid and you don’t see any solution, you don’t have that bridge to cross, you resist and you block. You have the feeling that everybody is against you and you’re going to lose everything.”

That’s the moment when climate campaigners and others have to understand what’s motivating workers who are nervous about the transition—and find common ground. “Demonizing those workers doesn’t help,” Rondeau stressed. “We want them to make the transition toward something better for everybody.”

Just transition has been a topic at the United Nations’ annual climate conference dating back to COP 21—the conference in 2015 that brought the Paris climate agreement into being. But Rondeau said it hasn’t been an easy road, and nobody has been taking the express lane.

“It’s very conceptual and high-level,” he told The Mix. In 2015, just transition was relegated to the preamble of the Paris agreement as a statement of principle, pushed out of the “operational text” that countries took some degree of responsibility for implementing. It took another three years, at COP 24 in Katowice, Poland, before trade unions and their allies won an official forum to even discuss just transition and economic diversification under the Paris accord.

That forum is a “poor child” in the COP process, he said, receiving far less attention and focus than big-ticket topics like climate finance or international carbon markets. But finally, “we’re slowly beginning to develop a work plan for just transition. It’s very technical, but it’s there and we’re trying.”

McDonell asked what it will take to pull public habits away from “continuous growth in consumerism, disconnected from nature,” and how those lifestyle changes connect to a just transition. Rondeau said it’s always a “very big challenge” to talk about the economic growth at the heart of conventional economics. But trade unions and many others in Quebec are doing a lot of work on the circular economy and the social economy.