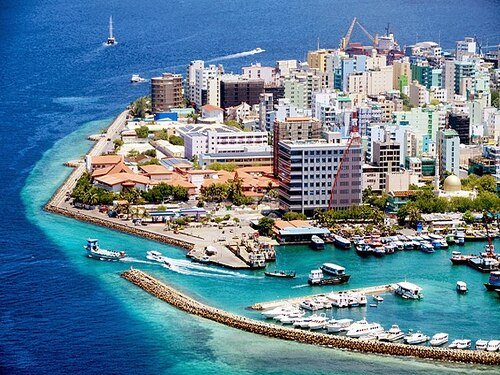 The harsh reality of climate change will land hard on Fiji, whose minister of economy delivered a statement at the opening of the COP 26 Ocean Action Day calling for stronger global support to protect island states and invest in ocean-based climate solutions.

“Oceans flow across international boundaries and thus their management is shared, collective, interdependent, and we need a collective approach to their protection and the public must be empowered to support those goals,” said Aiyaz Sayed-Khaiyum. “Not only are [island states] facing the physical and economic impacts of climate change, we are also facing threats to the legal stability of our sovereign rights over maritime zones due to sea level rise.”

His statement is all the more urgent considering the underwhelming response to a maritime crisis that Kristian Teleki, global director of ocean programs at the World Resources Institute (WRI), called “the equivalent of an underwater forest fire that is burning out of control” that “needs to be addressed”.

That fire is growing through dramatic changes like ocean acidification, increasing water temperature, and biodiversity loss. Sayed-Khaiyum acknowledged those impacts, but the emphasis of his statement was on rising sea levels and how they will affect island states’ rights.

The international regulations that determine national ocean boundaries did not change following the Intergovernmental Panel on Climate Change’s sixth assessment, despite the projection that average global sea levels will rise 0.28 to 1.01 meters by the end of the century. As a result, retreating coastlines could erode the rights of island nations and displace entire populations, says the World Bank.

Members of the Pacific Island Forum Initiative are anticipating these outcomes and recently issued a declaration to “proclaim that their rights should continue to apply without reduction, notwithstanding changes due to sea level rises.”

According to the UN Convention on the Law of the Sea, a country’s ocean boundaries extend 200 nautical miles from its coastal baseline as marked by the lowest waterline facing the ocean. Small island states’ economies often depend heavily on these areas, known as Exclusive Economic Zones, which can be important sources of food security, says the World Bank. But because a prevailing interpretation of the Law of the Sea recognizes coastal baselines as “ambulatory”—or moveable in response to a changing coast—rising sea levels are likely to reduce countries’ rights to these areas unless there is a clear pathway to fixing the baselines in their current measured location.

A retreating coastline can also downgrade a country’s status from an “island” that can sustain human life on its own to that of a “rock”, with fewer legal entitlements. Low-lying islands are additionally at risk of becoming entirely submerged; in this case there are no clear answers outlining whether the country will continue to exist legally, and the framework for relocating entire populations is unclear and fragmented, the World Bank says.

“The uncomfortable reality is that some island countries will be uninhabitable in the near future, regardless of whether we reach our temperature and emissions targets to stabilize the atmosphere,” law professor Sarah Reiter, head of Vermont Law School’s COP 26 observer delegation, told The Energy Mix.

Reiter stressed that other nations are largely responsible for the impacts imposed on island states.

“This is a great injustice and reflects the disproportionate burden of climate change and its impacts on the most vulnerable,” she said. “We have an obligation to find a way to ensure the rights of island nations and to promote international peace and security through the maintenance of these rights.”

But the options for addressing the ocean and climate crisis are undermined because ocean and climate regulations are covered by separate legal frameworks—The Law of the Sea and the United Nations Framework Convention on Climate Change (UNFCCC), respectively—that “are often engaged in the same type of parallel play we see in toddlers who play adjacent to one another but don’t try to influence one another,” explains Reiter.

There are some opportunities to bridge the two frameworks. Some legal scholars argue that defining carbon dioxide as pollution could connect the Law of the Sea with UNFCCC, says Reiter. Furthermore, climate and ocean are being jointly addressed by some countries that prioritize ocean-based solutions in their Nationally Determined Contributions (NDCs) under the Paris climate agreement.

And Reiter says the COP summits are having some positive outcomes for ocean regulation, noting that the UNFCCC and the Law of the Sea are interacting more with each other following the Ocean and Climate Dialogue convened at COP 25 in Madrid. She says she’ll consider this current summit “a success if we see a commitment to a recurring Ocean and Climate Dialogue, and an uptick of ocean-inclusive NDCs.”

Some of these measures were echoed by Sayed-Khaiyum as he stressed that rising sea levels demand coordinated action from the global community, with the ocean becoming a specific focus in climate solutions. He called on the UNFCCC to track global progress towards addressing the oceans crisis, and for “strengthening and integrating” ocean targets into NDCs and other government pledges.

Sayed-Khaiyum appealed for an immediate collective commitment to finance evidence-based actions that address the ocean crisis, in support of the climate response objectives of island states.

“We must synergize financing agendas and objectives to better reflect ocean issues and solutions,” he remarked.

Sayed-Khaiyum affirmed Fiji’s support for sustainable ocean finance to “build a big, blue momentum that will keep the ocean within UNFCCC processes and deliver ocean climate governance that unlocks the potential of a global, sustainable blue economy.”

That blue momentum may be building. WRI’s Teleki said the first week of COP 26 showed negotiators “finally getting the ocean in its rightful position in the centre of the discussion,” rather than the periphery. He cited proposals from several countries to continue the ocean and climate dialogue, along with commitments in areas like financing and blue carbon initiatives.

But while it adds up to a good start, we are “nowhere near where we should be,” he said, and there must be more ambitious financial commitments. As U.K. Minister for Pacific and the Environment Zac Goldsmith noted before Sayed-Khaiyum’s statement, “of all international climate finance, just 3% goes to nature, and of that 3%, a tiny fraction… goes into oceans.”

In its daily COP newsletter, ECO, Climate Action Network expressed incredulity at the poor level of investment. “Despite its enormous contribution to life and climate regulation on the planet, the ocean is still considered a side event of the climate negotiations,” ECO said last week. “It needs to be spelled out that the ocean is part of the solution to limit and adapt to 1.5°C of global warming.”