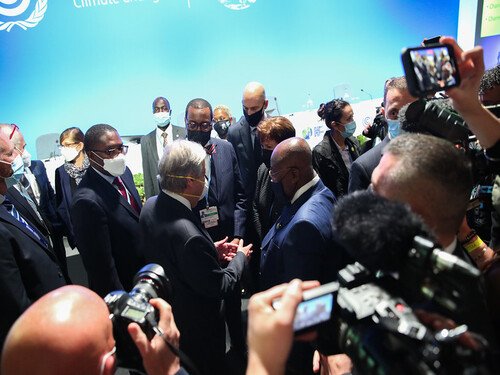 The climate talks in Glasgow are heading for “a rough tough week of hard bargaining”, and there needs to be much higher ambition than in the first week of negotiations if COP 26 is not to end in failure, a coalition of 1,500 environment organizations in 130 countries said Friday.

“If the goals of mitigating climate gases and money for adaptation for smaller nations are not met, we are talking about millions of lives being lost, many countries disappearing, of civilizations being lost,” said Rev. James Bhagwan, general secretary of the Pacific Council of Churches.

“Political will is demanded to end the terrible inequalities in the world, otherwise we will have to acknowledge that COP 26 has failed.”

Bhagwan was dismayed that many of the Pacific nations could not be represented at the talks because of the restrictions imposed because of the COVID-19 crisis. “What is decided here has immense import for those Pacific Islanders who find themselves unable to get here to state their case. We have to ask the negotiators from the big countries do they care about these people, or do they just represent the big corporations that will destroy the planet,” he said.

“We do not just want more talk, we want actions,” Bhagwan added. “Otherwise we die.”

Nafkote Dabi, head of climate change policy at Oxfam, put it another way. Twelve years ago, she said, the richest countries in the world had pledged that by 2020, $100 billion dollars a year would be flowing in aid to the poor countries to tackle climate change.

“It is shameful that this target has not been met,” she said. “We really need to change the economic system to end gross inequality. We have a capitalism that has a priority of profit and growth over people and the planet. We need to stop a system that creates extreme wealth.”

The two were talking at a briefing organized by the Climate Action Network. Greenpeace International Executive Director Jennifer Morgan told the session there were “a few rays of sunshine” in the first week of the COP in Glasgow, but it will need to be “all hands on deck” for the second week if the goal of limiting world temperatures to 1.5°C above pre-industrial levels is to be achieved.

The big issues were still the implementation of pledges. For example, coal is “packing its bags”, but countries had made promises without any plans for how they will carry them out.

The key issue for the second week is finance—for adaptation, and for loss and damage caused to developing countries by the historic emissions of the rich industrialized countries. “The lives and livelihoods of millions of people are on the line. Now is the time for action, not words,” said Nafkote Dabi, who referred to a report by Oxfam showing “the gross inequality and injustice” demonstrated by the emissions of rich people compared with the poor.

Each person on the planet has an annual carbon budget of 2.3 tonnes of carbon a year to align with the target of 1.5°C maximum heating for the planet if evenly distributed. The poorest half of the world’s population all fall under that figure. The richest 1% each emit 30 times more, and the next 10% nine times.

That means the richest need to reduce their carbon footprint by 97% to get under the 1.5°C target. Among the many things governments need to do are to ban sports utility vehicles and space tourism.

Asked whether the large climate demonstrations led by Greta Thunberg and her colleagues around the world are having any impact on the negotiations, Morgan said the protests increase the urgency felt at the talks and let big nations know they cannot “get away with backroom deals.”

As an example of the lack of real commitment shown by big nations, she cited the British government led by Boris Johnson, which is host to the talks. Johnson had flown back to London from Glasgow in a private jet rather than use the train, she said. The UK has a self-imposed legal duty to get to zero emissions by 2050, but no viable plans for doing so.

“The UK government is not giving a clear lead because it is still considering a potential new coal mine in Cumbria,” Morgan said. “Net-zero could not include that, or planned new oil and gas fields in British waters. We see a lot of vagueness in plans to get to zero. It is also not a good look for the Chancellor to reduce taxation on flying the week before the conference. They are not walking the walk.”

SUV's to Private Jets: Free Passes to ‘Polluter Elite’ are a Threat to 1.5°C, Oxfam Says